Fatah calls on Muslim worshippers to go to Temple Mount

“Set out for the al-Aqsa Mosque,” Fatah said on its official Facebook page, "break the Israeli siege that aims to change the historical sites of the holy city and judaize them.” 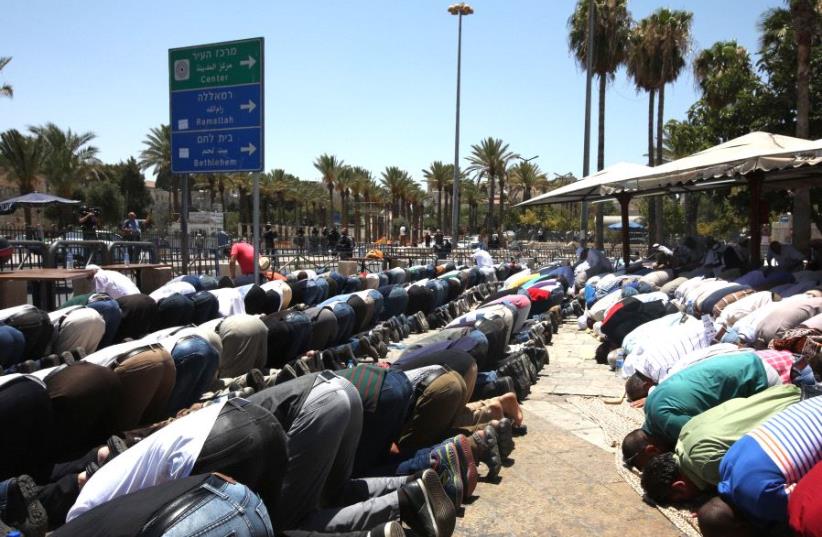 Muslims pray on the street outside the Old City
(photo credit: MARC ISRAEL SELLEM/THE JERUSALEM POST)
Advertisement
Fatah called on Muslims to go to the Temple Mount on Friday, after authorities closed the complex and canceled Friday prayers on the site following a shooting attack there.“Set out for al-Aksa Mosque,” Fatah said on its official Facebook page. “We call on our people to go al-Aksa Mosque, pray there, and break the Israeli siege that aims to change the historical sites of the holy city and Judaize them.”Thousands of Muslims normally pray on the Temple Mount each Friday.Public Security Minister Gilad Erdan said, “There is no danger to the Temple Mount. There is no desire to change the status quo.”Amar al-Kiswani, director of al-Aksa Mosque, said Friday prayers on the Temple Mount had not been canceled since 1967.“This is a message not only to Palestinians, but also to the Arab and Muslim world,” Kiswani said in a statement.“This is a dangerous matter igniting the situation in al-Aksa Mosque and along its surroundings.”The Grand Mufti of Jerusalem Muhammad Hussein also called on Muslim worshipers to go to the Temple Mount.“There is no force on earth that will prevent them [Muslims] from going to al-Aksa and performing Friday prayers there,” Hussein said.Police said the Temple Mount would remain closed for an undisclosed amount of time, until the conclusion of an investigation into Friday morning’s attack, which they called “extreme and exceptional.”Maj.-Gen. Yoav Mordechai, the coordinator of government activities in the territories, said security forces canceled Friday prayers to make sure there are “no weapons” on the Temple Mount.“We hope that freedom of worship will be restored as soon as possible,” Mordechai said.The police said the attack on the Temple Mount left three wounded – two in critical condition and one lightly injured.Hamas leader Usamah Hamdan praised the attack, calling it a “natural response to the occupation’s crimes.”“The al-Aksa clash is a badge of honor on the chest of the Muslim nation and the Palestinian people, a natural response to the occupation’s crimes at the expense of our people and holy sites, and an affirmation that resistance is not terrorism,” Hamdan said in a post on his Twitter account.Hamas regularly endorses stabbing and shooting attacks in Jerusalem.On Saturday, Hamas urged Palestinians to clash with Israelis at friction points.“We call on our Palestinian people to escalate the blessed Jerusalem intifada, clash with the enemy and the settlers at all friction points, and defend al-Aksa Mosque,” Hamas spokesman Fawzi Barhoum said.