The quest for solar energy in Israel is intrinsically linked to Peres’ sense of carrying Ben Gurion’s torch. 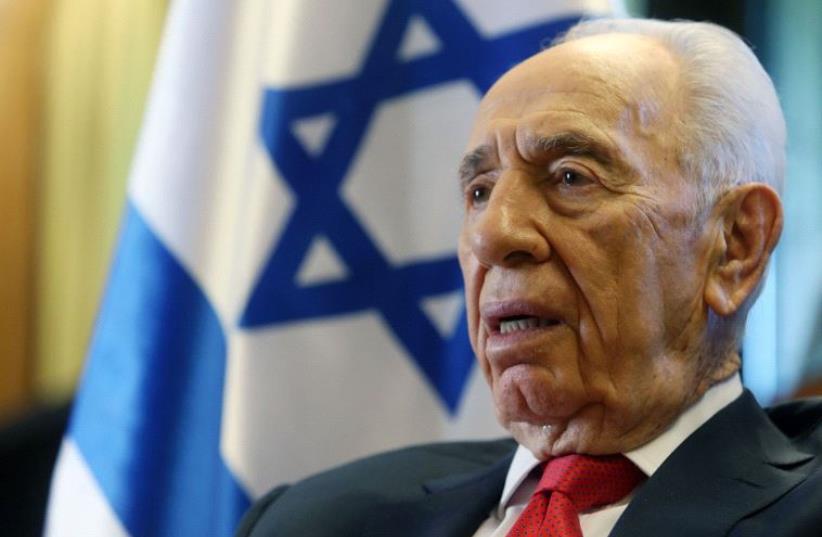 Shimon Peres
(photo credit: MARC ISRAEL SELLEM/THE JERUSALEM POST)
Advertisement
David Ben Gurion, in 1969, met with an idealistic Young Judaea Year Course group on the lawn of Kibbutz Sde Boker, outside his modest hut, and urged them to build a new kibbutz in the desert. Thirty-eight years later his protégé, the newly minted President of the State of Israel, Shimon Peres, arrived in the Arava on a picturesque sunny day at that Young Judaea kibbutz, Ketura, and urged that they fulfill Ben Gurion’s unrealized dream for the desert: to provide green energy for Israel and the world.Ben Gurion, who was also instrumental in making sure the hot water solar heaters were on nearly every Israeli rooftop, observed as far back as 1955, the following: “The largest and most impressive source of energy in our world and the source of life for every plant and animal, yet a source so little used by mankind today is the sun...Solar energy will continue to flow toward us almost indefinitely.”The quest for solar energy in Israel is intrinsically linked to Peres’ sense of carrying Ben Gurion’s torch and is captured here in three very different scenes, like in a movie, from the decade of struggle that the industry has had to endure. Each scene is captured in a picture and has its charms: the fascination with technology and its potential peace dividend, his love of female celebrity and bringing people together, and the sweet triumph of idealism over cynicism, especially in the desert.Scene one: The Presidential motorcade pulls up to the curb outside of Keren Kolot, the Ketura guest house. It was 2007. Jucha, the mustached, tall senior aide to Peres and his unofficial prolific photographer, comes around and opens the reinforced black door. About 60 people burst into peace songs to welcome the President, including about forty Israeli, Palestinian, Jordanian and American students studying at the Arava Institute for Environmental Studies, also based on Ketura.It is classic Peres, at his very best. Deep voice, poetic words, inspiration as bright as the sun that day. Jucha, in setting up the visit, knew the idealism of the people of the Arava is what would give Peres energy, and Peres, on his tour of the experimental solar park at the Arava Institute, returned the favor to all around him. He implores us to fight the bureaucracy until we win the solar battle.He offers his assistance. He invokes Ben Gurion’s vision. He says only from Ketura and the Arava could this revolution be launched. He left us no choice. 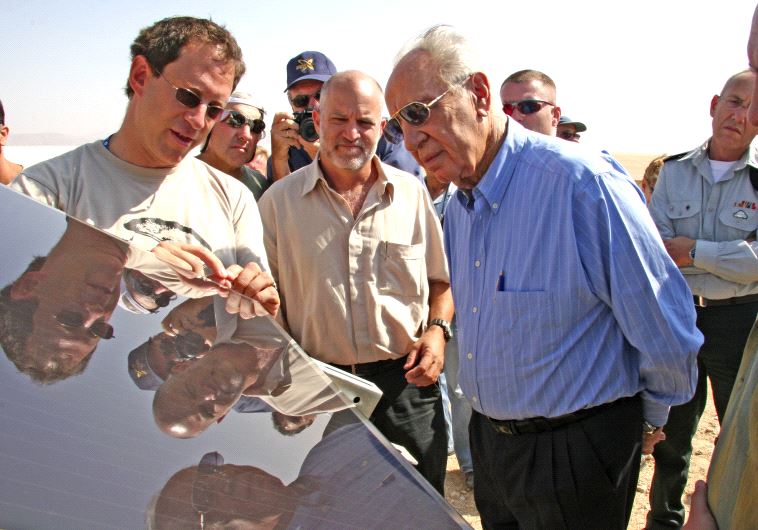 Shimon Peres at Kibbutz Ketura (Yuval Ramos)
Ketura member Yuval Ramos snapped this picture of the President inspecting one of the first thin-film new panels to arrive in Israel that was being tested. To his left is Udi Gat, the long-time head of the Eilot municipality that birthed the solar industry, and note the student on the far right, Suleiman H., a Jordanian who became quietly instrumental in the founding of the solar industries in Israel and Jordan. Suleiman, now living on Ketura and studying for a doctorate in solar desalination, explains to the President that the thin film is better suited for the heat of the desert, and this author, wearing a Ben Gurion with a revolutionary beret t-shirt, explains the roll-out plan. Ramos gets the shot. We take on the State of Israel, with the blessing of its President.What Peres didn’t say that memorable day is how difficult the journey was going to be. What didn’t help is the near collapse of the Western economies in 2008, the discovery of natural gas, the political in-fighting of the 24 various government offices that, to this day, are still an embarrassment to Start Up Nation. Or the determination and power of the bean counters in the Finance Ministry to kill the industry, which is still true today.There were times when myself and my Arava Power co-founders, Ed Hofland of Kibbutz Ketura and David Rosenblatt of New Jersey, were so frustrated and incredulous that the machinations of state worked against the obvious benefits that solar energy would present. Energy independence thru clean power. Investment in the periphery. Green Zionism. Yet the bean counters ruled, intoxicated with the messianic allure of the gas. We soldiered on, some days better than others.Scene two: It is hard to speak about Peres’s presidency without name dropping.He was, quite frankly, a babe magnet. Rita. Madonna. Natalie Portman.Naomi Campbell. 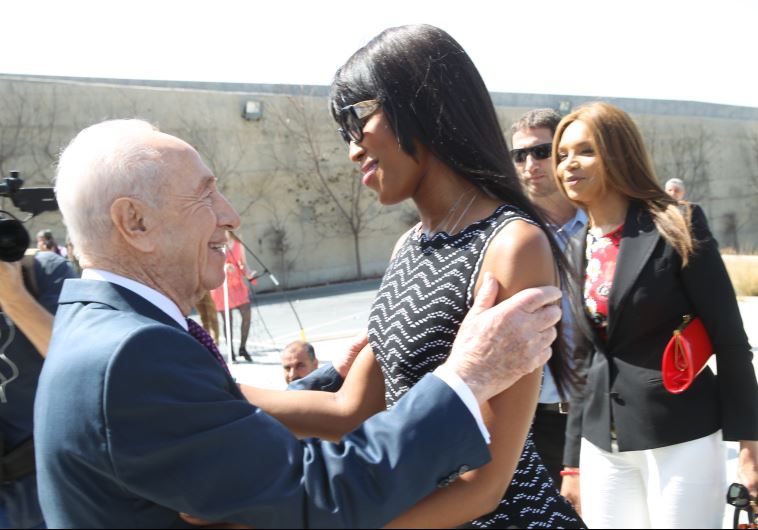