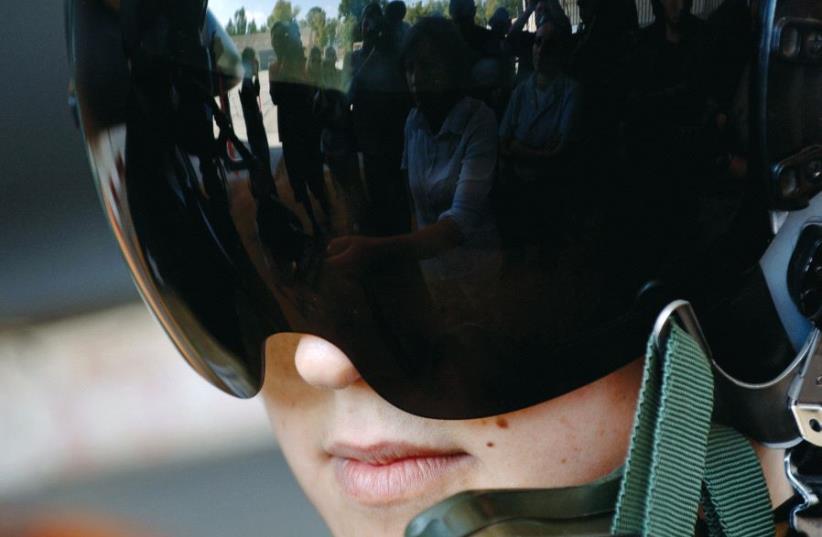 A female air force pilot at the Hatzor base
(photo credit: REUTERS)
Advertisement
In a first for the Israel Air Force, a female pilot has been appointed deputy commander of a combat squadron by the head of the IAF, Maj.-Gen. Amikam Norkin.The officer, “Capt. Y,” an F-15 navigator, will serve in the Spearhead Squadron, which flies F-15 fighter jets out of Tel Nof Airbase in central Israel.Currently serving in an operational capacity at IAF Headquarters, she will be promoted to the rank of Major in the summer and return to the skies.Capt. Y (her full name cannot be disclosed for security reasons), is 27 years old and is from Tel Aviv. She is married to another IAF pilot and her grandfather, Maj. Shimon Ash, served as a reserve pilot in a Skyhawk Squadron at Tel Nof Airbase during the Yom Kippur War. His plane crashed some 10 kilometers east of the Suez Canal, north of the Ismailia-Tasa road. While the remains of the plane were later found, his body has never been recovered.Two other female officers were appointed by Norkin last night to serve as deputy commanders of a squadron of drones out of Palmachim Airbase.With more women enlisting in combat positions in the IDF, women have also been reaching senior positions in the IAF as well.A senior IAF officer recently told The Jerusalem Post that he believed a female IAF squadron commander was not far off.In 2014, a woman was named deputy commander of an operational squadron, serving as second-in-command of the Nachshon Squadron at the Nevatim Airbase in the southern part of the country. While women have served as deputy commanders of support squadrons, the promotion of “Maj. Gal” (name not disclosed) made her the highest ranking woman in the IAF until now.