An in-depth peek into the first 787 Dreamliner for Israel’s national carrier - before it is even delivered. 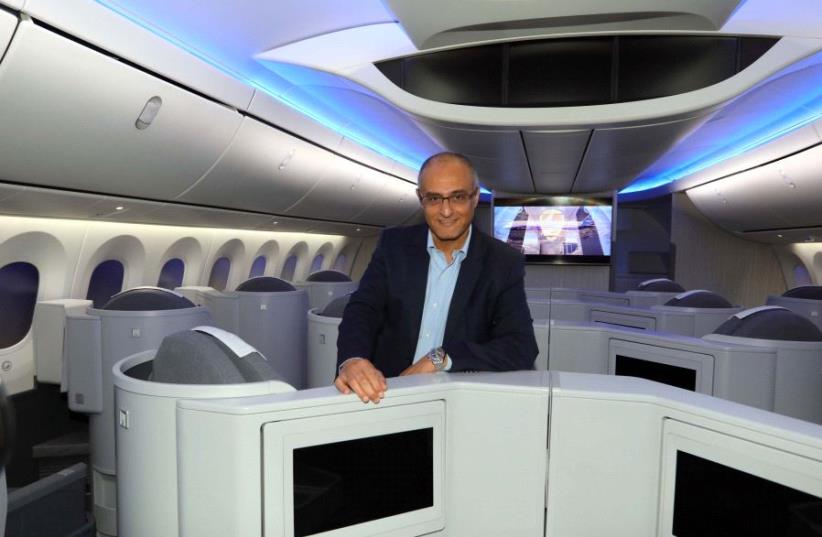 El Al CEO David Maimon in a new Dreamliner 787 aircraft
(photo credit: SIVAN FARAG)
Advertisement
SEATTLE – Close to six years after the Boeing 787 Dreamliner soared onto the aviation market, El Al is preparing to receive its first of the new powerful airplanes.El Al, which operates an all-Boeing fleet, is set to take delivery of the first of 16 787 jets by the end of August. The plane’s maiden flight is expected to take place in September, said El Al CEO David Maimon. The jets will begin with routes in Europe, and by October will begin flying to North America, he added.“We’re swapping out and adding planes and growing,” Maimon told The Jerusalem Post in a recent interview. He noted that while El Al has inked a deal for the planes for more than $1.25 billion, they also have the option of another 13 planes. “Those options will allow for additional growth.”Ahead of the delivery of the first plane, El Al and Boeing brought a group of Israeli journalists to Seattle to take a peek inside the jet and get a closer look into the intensive process behind the fashioning of each plane.Compared to El Al’s aging fleet of long-haul planes, the 787 is a modern wonder, with the attention to detail felt in every step of the aisle. While obviously the biggest luxuries will be felt in the premium classes, benefits – including subtle ones – will be experienced by passengers seated throughout the plane. 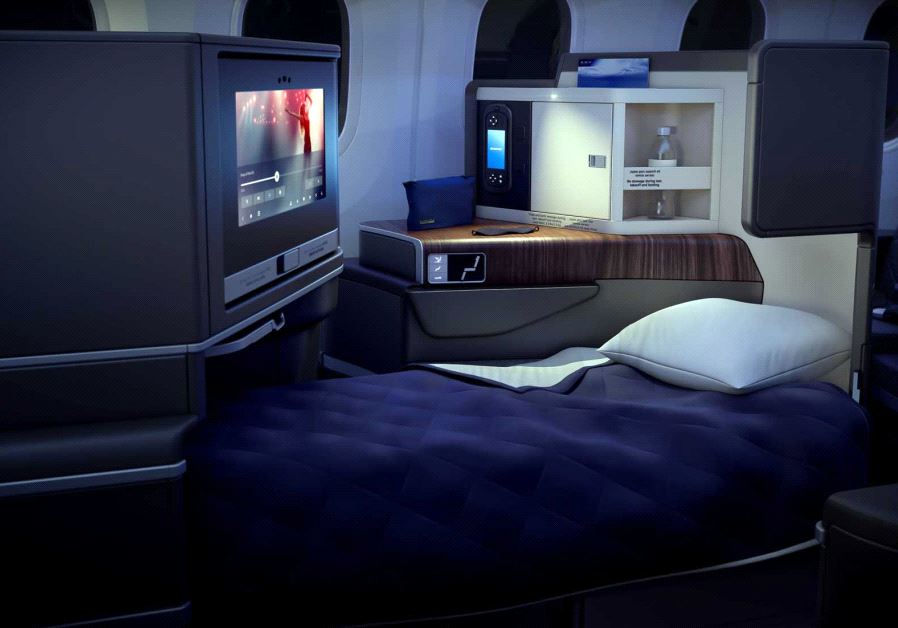 A look inside the new El Al Boeing 787 Dreamliner (El Al)Boeing conducted “extensive customer research” before designing the plane’s interiors, said Kent Craver, the regional director of cabin experience. He said he found it “sad” to note that Economy passengers viewed their ideal flight as one in which they were able to fall asleep and had nobody sitting next to them.While hoping for that concurrence is unlikely to change (can it get better than that?) Boeing has nevertheless invested a great deal in making the entire experience more pleasant.Jim Haas, director of product marketing, said Boeing “surveyed passengers from around the world” to see what they wanted out of their flight – and “the result was eye-opening.”The changes that will be felt by everyone on board once El Al’s 787s begin operating include cleaner air, lighting designed to reduce jet lag, reduced experience of turbulence, larger and more hi-tech windows and the simulation of a lower cabin altitude.“We’ve got an advanced flight deck and heavy focus on passenger experience,” said Haas. “From all the things you can see – like the lighting and the windows – to all the things that you can’t see.” He said passengers who have already experienced the 787, said “it’s reliable, it’s comfortable, it’s efficient.”MANY OF the technological advancements on board are enabled by the revolutionary use of composite materials in creating the fuselage and wings of the 787. The composites weigh less than traditional materials, and also reduce the number of rivets and bolts needed, making the entire structure even lighter overall.The big benefit to El Al – aside from attracting a more discerning passenger – is more fuel efficiency: the 787-9 will save about 20% compared to the planes it is designed to replace.Raising the fuel efficiency means the Dreamliner has also opened up new routes globally that previously weren’t thought feasible or profitable. According to Boeing, more than 150 new non-stop routes have opened up since the 787s hit the market. These include a direct Tel Aviv to San Francisco flight, operated by United, which launched last year. 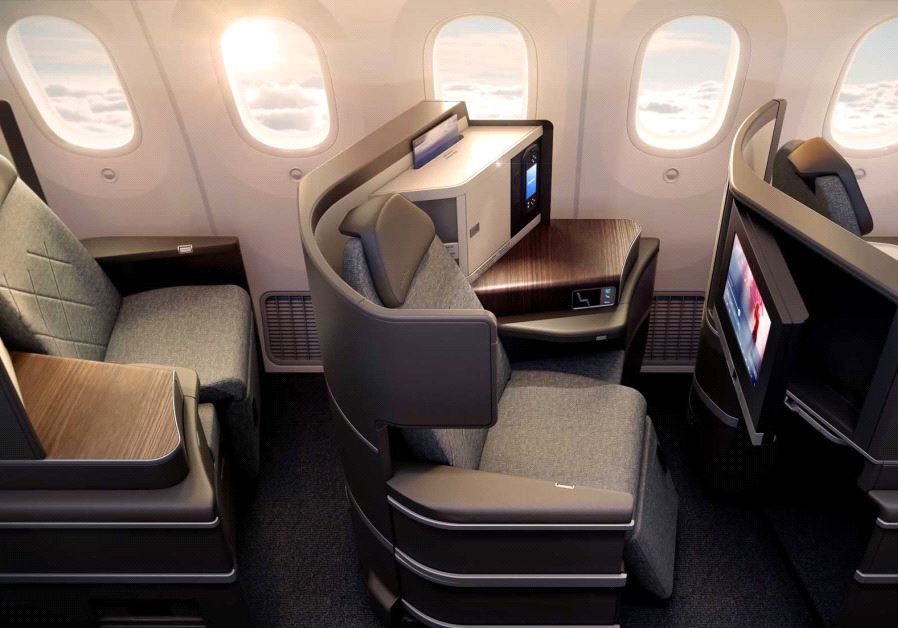 A look inside the new El Al Boeing 787 Dreamliner (El Al)El Al’s newest destination will be a direct flight from Tel Aviv to Miami, set to launch November 1. It won’t be operated by a 787, said Maimon, but rather will be made possible by shifting planes set to be replaced to the route.“We are working on additional destinations,” he said. “We can’t publicize them yet, but there will be.”El Al previously flew direct to Miami before canceling the route in 2008 due to rising fuel costs. But as for the addition of any previously impossible (or not-profitable) routes to be charted by the Dreamliner? That remains to be seen.SINCE EL AL took delivery of its first Boeing jet – a 707-420 on April 24, 1961, the airline has operated an entire Boeing fleet. But many of its 42 planes – in particular those on the long-haul flights – are aging and in bad need of upgrades. The average age of El Al’s long-haul fleet is approaching 20 years, and that is certainly felt by passengers. The new Dreamliners will be replacing El Al’s 747 workhorses (the first of which has already retired), as well as at least some of its 767 jets.The 787s will bring modern touches long overdue to El Al’s long-haul flights. Those include finally bringing Video On Demand service to everyone on board, as well as power and USB sockets available to every passenger – things that many are already used to from other airlines.There will be no First Class aboard El Al’s Dreamliners – the options are Business, Premium Economy, and of course Economy. The Business area features lie-flat seats, a high-level of privacy, direct-aisle access for every passenger, plenty of personal storage space and of course the biggest TV screens on board. El Al also said in-flight Wi-Fi will become available on its Dreamliners at some point in 2018.The screens in every class will increase – to 16” for Business, 13” for Premium Economy and 12” for Economy.Overall the economy area – where the vast majority of passengers fly – isn’t radically different. The legroom there is actually an inch less than on the 747 and 767s, according to data available. But the seats come with a six-way adjustable headrest, and the improvements felt by every passenger should give those in the back of the plane a boost as well.One of the more dynamic changes involves the windows. Throughout the cabin, the windows are dramatically larger, so it isn’t only those seated along the windows who get a peek.“Everybody wants to be connected with flight and that’s what we wanted to do,” said Boeing’s Haas, “make sure the tops of the windows were taller than the tops of the seats.” On the Dreamliner, he added, “every seat is a window seat.”But that’s not the only change. The windows are all missing their signature plastic pull-down shade. Instead each one has buttons to electronically lighten and darken the window – but never fully obscure the view. This way no one passenger can lift a shade, blinding his fellow slumbering passengers mid-flight. And the cabin crew can also limit the adjustments during certain hours, but not totally block the usage.“They get very dark, but they’re not 100% pitch black,” Haas said. “Even on the darkest setting you can still see out a little bit.”Boeing also put a lot of thought into the on-board lighting, and the new system is designed to help reduce jet lag, the company said. The LED lighting allows for gradual dimming and brightening, to help passengers adjust more easily to their new destination. 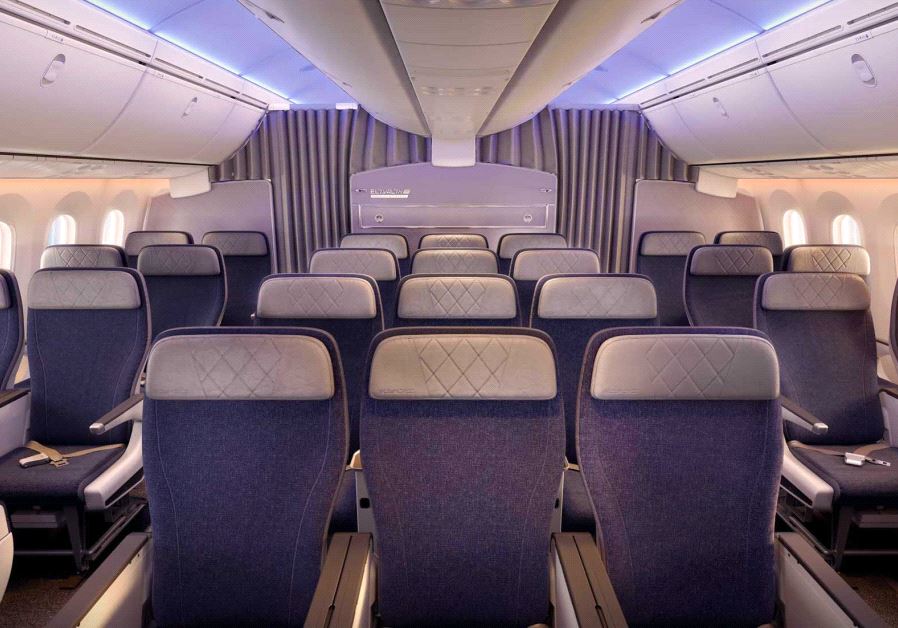 A look inside the new El Al Boeing 787 Dreamliner (El Al)The company also said the planes are outfitted with technology to reduce the feeling of turbulence while in flight. The system, said Haas, works somewhat “like noise-canceling headphones,” sending out a countering signal to outside interference to keep things balanced. Of course it can only do so much, and serious turbulence can still result in drinks being strewn across the cabin and even injuries from flying objects.The simulation of a lower cabin altitude – around 1,800m. instead of 2,400m. on most other planes, is designed to have passengers feeling better both during and after the flight, and also aid jet lag recovery.SITTING ON the tarmac outside the Everett Factory in Seattle, Washington late last month, El Al’s first Dreamliner was close to completion. The economy seats were installed, though the premium section lay bare. The plane’s tail was already emblazoned with the Israeli flag, while the rest of the body was still awaiting paint. (The tail gets done first to ensure the weight of the paint won’t somehow shift it off-center.) When the plane was examined by the eager group of Israeli reporters, it was just weeks away from its final tests and checks before flying to Tel Aviv on August 23 in its maiden voyage.Israelis and Jews living abroad have often shown an affinity for flying El Al – both from a security perspective and their desire to feel at home in the air. But its aging planes and outdated technology have turned many customers away over the years. It also suffered a reputation blow in its drawnout dispute with its pilots over pay, which resulted in many delayed and canceled flights.El Al has already begun to upgrade its fleet, with eight new 737-900 jets in operation on short-haul flights to Europe. After the airline receives its first Dreamliner in August, the next will follow before the end of the year. By 2020, all 16 El Al 787 planes are slated to be flying to the airline’s longhaul destinations.Will re-hauling the Israeli national airline’s fleet be enough to claw back the customers who left for low-cost airlines and more upgraded planes? That is El Al’s $1.25b. gamble.The writer was the guest of El Al and Boeing.