Funerals for victims Yosef Salomon, and his children Chaya and Elad, will be held at 5:30 p.m. at the Modi'in Cemetery. 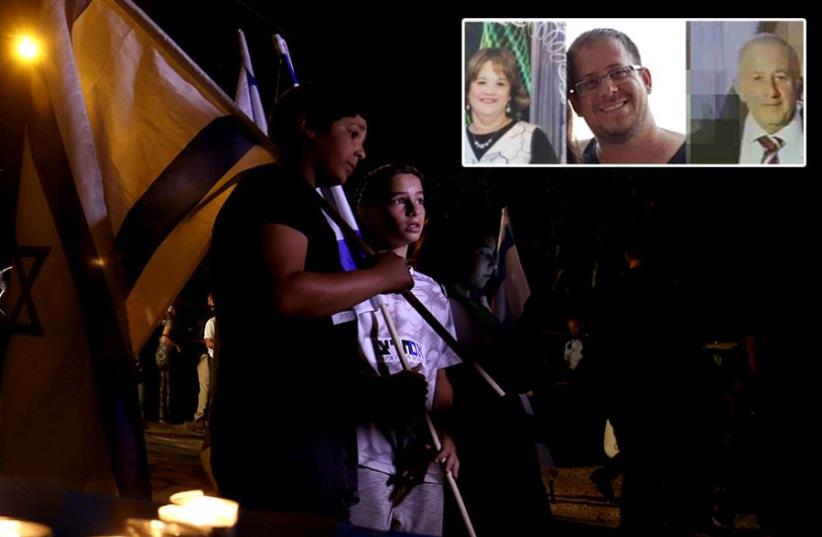 The three Israeli victims of Friday evening's lethal terror attack in the West Bank settlement of Halamish
(photo credit: COURTESY OF THE FAMILY AND THE MUNICIPALITY OF ELAD,REUTERS)
Advertisement
The funerals for the three Israelis who were killed by a Palestinian terrorist in an attack Friday night in their home in the West Bank settlement of Halamish were scheduled for Sunday evening. Mourners are due to hold the joint funeral for the attack's victims - Yosef Salomon, 70, and his children Chaya, 46, and Elad, 36 - at 5:30 p.m. on Sunday at the cemetery in the central city of Modi'in.
Three Israelis were killed in a stabbing attack in Halamish, July 21, 2017 (Reuters)
The relatives of the three who were slain as their family was eating Shabbat dinner and celebrating the birth of Elad's new-born son are due to sit shiva, the week-long mourning period for direct family members, at the home of Elad's family in the city Elad.At the family's request, the funeral will be closed to the media.  During the attack, knife-wielding 19-year-old Palestinian terrorist Omar al-Abed entered the home of the Jewish family and began attacking those inside. The attacker stabbed to death the three, and severely wounded Yosef's wife Tovah, who remains hospitalized.The three victims of the lethal attack in Halamish. (COURTESY OF THE FAMILY AND THE MUNICIPALITY OF ELAD)An IDF soldier living nearby heard the screams emanating from the house and shot the terrorist who was then taken to hospital for treatment. "I was standing outside the house and I saw the terrorist from the window. I understood that I had to act cool-headedly and be professional. I fired one bullet at him, and it hurt him in the stomach and neutralized him," the soldier said in an interview released following the attack. Images released from the scene of the deadly attack showed large amounts of blood staining the floor and various surfaces of the Halamish home. The brutal attack came amid heightened tensions in the wake of a shooting attack at the Temple Mount on July 14 that left two Israeli Border Police officers killed. Following that attack, Israel increased security measures, including installing metal detectors and cameras around the entrance to the Jerusalem holy site, as well as deploying extra troops to Jerusalem and the West Bank. The Palestinians and the Muslim world reacted with furor over the moves, which they said indicated an Israeli attempt to change the status quo at the Temple Mount.  A spate of violence and clashes have since ensued.Prime Minister Benjamin Netanyahu condemned Friday's terrorist attack, and expressed his deep sorrow over the murders of the father and his two children. "This is an act of terror that was carried out by an animal of a human, incited by profound hatred. Security forces are doing the best they can in order to maintain security, and will take all the steps necessary to do so," the premier stated. Netanyahu is expected to convene the security cabinet on Sunday to discuss the volatile security situation, amid signals Israel is weighing alternatives to the positioning of metal detectors at entrances to the Temple Mount.