Environmentalists and politicians alike have long seen the tank, which contains all the ammonia imported by Israel, as a threat to the region. 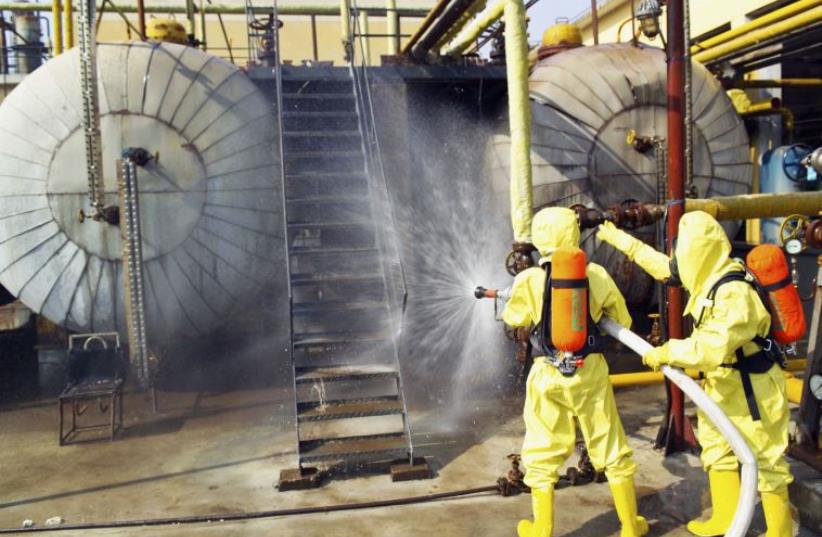 Firefighters use water to dilute ammonia leaking from a chemical plant
(photo credit: REUTERS)
Advertisement
Drama continues to build around the Haifa Bay’s “ticking time bomb” ammonia container after the city’s local affairs court on Sunday postponed making a decision about the facility’s fate.The court convened for several hours to discuss an appeal filed by the container’s proprietor, Haifa Chemicals, regarding a ruling earlier this month to empty the storage tank. After the court delayed the ruling’s implementation in order to follow up on the appeal, a decision on the matter was supposed to take place on Sunday.
Hezbollah leader threatens Israel"s ammonia and nuclear facilities (MEMRI)
The increasingly controversial 12,000-ton ammonia processing and storage facility that sits in the Haifa Bay has long been seen by environmentalists and politicians alike as a threat to the region.The container, which contains all the ammonia imported by Israel, began garnering international attention a year ago when Hezbollah chief Hassan Nasrallah threatened to attack it. While ammonia is a key ingredient in industrial refrigeration and fertilizer production, it is also a highly toxic gas once exposed to open air.“My decision will be given in the coming days,” wrote Justice Tamar Sharon-Netanel following the court’s session.Last Wednesday, the Environmental Protection Ministry had stepped in to ensure the container’s shutdown, regardless of the court proceedings.Slamming Haifa Chemicals for failing to provide suitable alternatives, ministry officials said they would not renew the site’s toxins permit when it expires on March 1, but allowing imports for emergency purposes through June 1.The ongoing court discussions are the result of a Haifa Municipality request following the publication of a report commissioned by the city that the court shut down the facility.Led by Prof. Ehud Keinan of the Technion-Israel Institute of Technology, the report concluded that an attack on the tank could lead to the deaths of thousands of area residents, while a strike on the ammonia delivery ships could kill hundreds of thousands.On Sunday morning, before the inconclusive hearing, several thousand concerned residents and environmentalists protested outside the courthouse.Meanwhile, students throughout the country and the Haifa area joined the call to shut down the container; the National Student and Youth Council, together with the Haifa district student council, canceled classes in some eight municipalities in the area until noon.“The ammonia tank is a ticking time bomb. We cannot let this tremendous danger continue to reside in the heart of an area populated with so many residents,” Hanan Yazadi, head of the National Student Council, said. “Youth in the State of Israel call for the immediate closure of the ammonia tank.”Mor Gilboa, CEO of the Green Course student movement, praised the protesters and students for their civic participation, saying Haifa area residents “showed up in droves to convey a clear message to the Israeli government that we must get rid of this ticking time bomb in the Haifa Bay.”Nobel Prize-winning chemist Prof. Dan Shechtman also joined in the fight, describing the infrastructure as “very, very dangerous” in an interview with Israel Radio’s Reshet Bet on Sunday morning.“Ammonia is a toxic substance and we cannot allow the container to remain in the heart of a civilian population while Haifa Chemicals totally disregards the law,” he said.Shechtman, a professor of materials science at the Technion, later told Haaretz he was prohibited from speaking during the morning’s court discussion despite a three-hour wait at the building.Like Keinan, Shechtman stressed that even more problematic than the container itself are the vessels that deliver the ammonia.“With the help of a LAW [light anti-armor weapon] rocket, it’s possible to lift the ship into the air, and this would be a horrible disaster,” he said.