The criminal allegations were leveled against Ronnie Barkan, Majed Abusalama and Stavit Sinai, who face charges of trespassing for their activity at the Humboldt University event with Lavie. 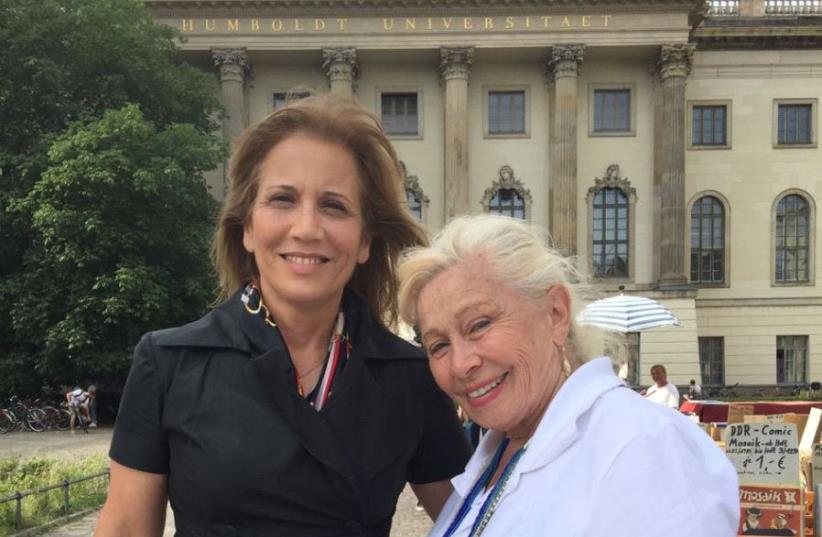 Israeli MK Aliza Lavie pictured with Holocaust survivor Devorah Weinstein at Humboldt Unviersity, Berlin.
(photo credit: Courtesy)
Advertisement
A criminal complaint filed against three BDS activists who allegedly launched physical and verbal tirades at MK Aliza Lavie and an Israeli survivor of the Holocaust at a June event in Berlin has been sent to a police division responsible for political extremism, a spokeswoman for the authorities told The Jerusalem Post on Saturday.The criminal allegations were leveled against Ronnie Barkan, Majed Abusalama and Stavit Sinai, who face charges of trespassing for their activity at the Humboldt University event with Lavie.A spokesman for Yesh Atid’s Lavie told the Post on Wednesday that the MK “expects there will be some sanction against them, not only because of the offending behavior in this case, but mainly as a message against this type of violent discourse, whose consequences may be dangerous.”According to the complaint, a female BDS activist, who is believed to be Sinai, “swung [her fists] wildly around her and attendees” as she was escorted from the university room for disrupting the event. She “continuously attempted to reenter the lecture hall and pounded on the door.”Barkan runs a group called “Boycott from Within” in Israel and has been barred from delivering BDS talks in municipal buildings in the northern German city of Oldenburg.The Post obtained a June 20 letter from Humboldt University president Dr. Sabine Kunst to Lavie in which she wrote: “You came to Humboldt-Universität zu Berlin on June 20th to talk about ‘Life in Israel – Terror, Bias and the Chances for Peace.’ Unfortunately, you were harassed by three individuals on that occasion. Please accept my heartfelt apologies for the incident at your talk with the German- lsraeli Society in rooms of our university.”Kunst added: “Criminal charges for trespassing have been filed against the three disturbers. lt is a matter of particular interest at Humboldt-Universität to prevent incidents like this from happening again.”In response to Kunst’s letter, Lavie wrote: “I am sure that the University is doing all that it can to prevent such events that attack freedom of speech and intellectual debate. I look forward to cooperation and hope that academic institutions everywhere will continue to uphold the principles of fair and dignified discussion. Falling to prey to rabble-rousing tactics does not uphold the principles of academia and brings ill repute on our educational systems worldwide.”She added: “Open discourse is a pillar of academia, and we must work together to ensure silencing, incitement and violence do not prevent our dialogues.”When asked about the BDS activists who disrupted the event in June, Sibylle Quenett, a spokeswoman for Germany’s educational minister Johanna Wanka, said the minister “condemns the incident” at Humboldt University.In an open letter on the webpage of BDS Campaign, the three BDS activists wrote: “We three human-rights activists engaged an act of political protest, which was directed at an official Israeli state representative, MK Aliza Lavie (Yesh Atid political party). The aim of action was twofold: first, to protest Lavie’s ‘Hasbara’ event, which was hosted by Humboldt University, and second, to raise public awareness to Israel’s criminal responsibility in perpetuating an apartheid regime.”Barkan wrote in a separate entry, “Pray for the Germans who desperately need a non-Zionist media outlet.”DAB Bank shut down the account of BDS Campaign in 2016 for alleged discrimination against Israelis based on their national origin.