The largest warship in the world, named after George H.W. Bush, has recently been involved in strikes against ISIS in both Iraq and Syria. 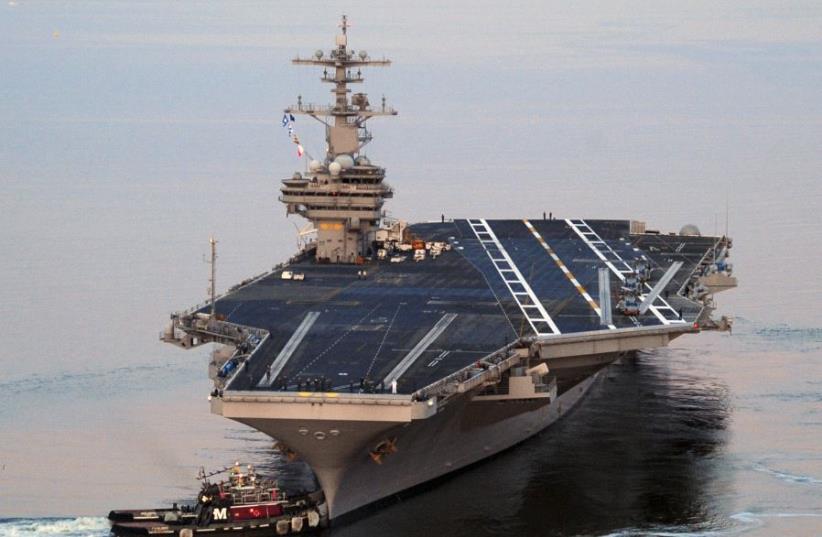 The Nimitz-class aircraft carrier USS George H.W. Bush (CVN 77) departs Naval Station Norfolk, Virginia, for its maiden deployment, May 11, 2011.
(photo credit: REUTERS/NICHOLAS HALL/U.S. NAVY/HANDOUT)
Advertisement
The awe-inspiring USS George H.W. Bush supercarrier docked outside Haifa Port on Saturday.One of a 10-ship fleet, currently the largest warships in the world, the carrier is named for the 41st president of the United States and recently has been involved in strikes against ISIS in both Iraq and Syria. The warship, which cost a hefty $4.5 billion and is expected to be part of the US Navy’s armory for the next 50 years, is powered by two nuclear reactors, meaning it can sail for more than 20 years without needing to refuel.

#USSGeorgeHWBush aircraft carrier has arrived to #Israel & is docked outside #Haifa Port. Ship is currently taking part fight against #IS pic.twitter.com/FtCGEOknC4

The ship, which has the capacity for 6,000 personnel, is expected to remain in Israel for four days during which crew members will be given the opportunity to tour the country and celebrate the American Independence Day.