Google is still inviting Israelis who live in cities along the bus route to come visit a special area built around the bus at each stop. 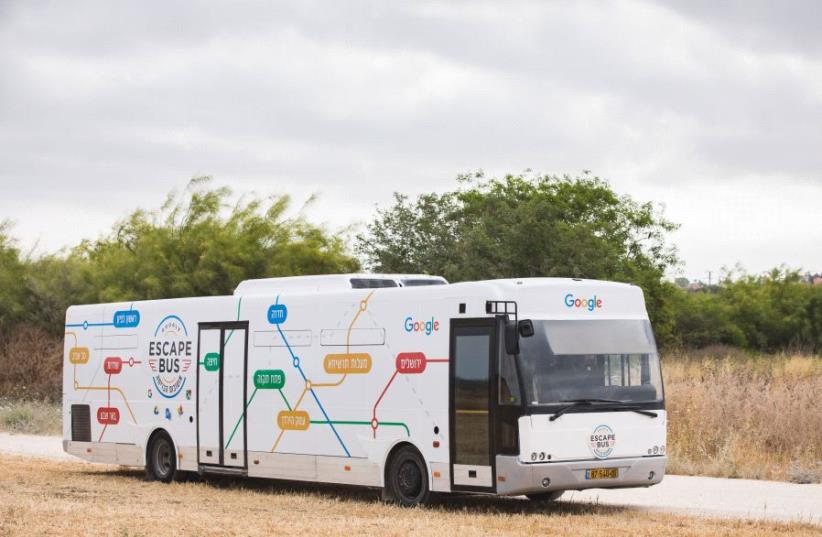 Google Escape Bus
(photo credit: TOMER FOLTYN)
Advertisement
Parked next to an Ottoman- era rail car on the wooden promenade of Hatachana, Tel Aviv’s new Station complex, a bright white bus equipped with hi-tech riddles opened its doors to Israel’s wannabe sleuths Wednesday morning.Walking around a shaded waiting area lined with green turf, a small group of journalists approached the bus bearing a well-known sans-serif logo to the left of its front door. Preparing to board the vehicle, the visitors received instructions via tablet that they were now part of a rock band whose members had lost their stage-access tags. It was their mission to enter the band’s bus and find new ones.For the next half hour, and with some hints along the way, the journalists worked to solve a series of puzzles to exit the brand new Google Escape Bus – the company’s first and only such vehicle to hit the roads anywhere.
Google Escape Bus. Credit: TOMER FOLTYN
Catching on to the global Escape Room craze, Google decided to provide Israelis with a mobile version at their doorsteps – asking them to crack codes using five of the firm’s popular apps: Translate, Photos, Maps, Search and Drive. By launching such a challenge, the company aims to show how these apps can collectively help users solve a variety of life problems, a Google spokeswoman told The Jerusalem Post at the site on Wednesday.Starting their mission, the participants entered a dimly lit bus, immediately scrounging between white pleather (artificial leather) sofa cushions and under a matching feather boa. Microphones dangled from the ceiling, and an electric guitar hung in one corner across from a locked mini-fridge and a case of crystal shot glasses and decorative musical mugs.After eventually uncovering two hidden Android smartphones, the “detectives” worked to decipher clues using both physical devices in the bus and the Google apps, with purple neon lighting guiding their mission. By working together to a tackle a creative set of challenges, the journalists eventually made it out the bus’s back door.After a daylong stay at the New Station complex on Wednesday, the Google Escape Bus will head out on Thursday morning for two weeks of travel, stopping in 10 cities around the country.The Escape Bus, according to Google, is suitable for families with older children, work outings, school friends and adventure enthusiasts of all kinds. Immigrants and tourists should be forewarned, however, that using the phones onboard the bus and decoding many of the riddles requires Hebrew fluency.With only two phones to go around and just a small space to hold five group members, some visitors also might find the quarters a bit too close for comfort.While the sign-up to become an Escape Bus participant has already closed, Google is still inviting Israelis who live in cities along the bus route to come visit a area built around the bus at each stop that will provide a taste of the escaperoom experience, including a variety of riddles and prizes, the company promised.After leaving Tel Aviv, the bus will stop in Petah Tikva on Thursday, Rishon Lezion on Friday and Saturday and then head north – to Emek Hayarden and Ma’alot-Tarshiha on Sunday and Monday.Next Tuesday, June 13, the bus will stop in Hadera, followed by Haifa on Wednesday and Thursday and a return to Tel Aviv for the weekend on Friday and Saturday. On Sunday and Monday, June 18-19, the bus will visit Jerusalem and then head to Beersheba on Tuesday the 20th before spending its final day in Sderot on Wednesday the 21st.