Erdan said that the PA’s hand in paying terrorists and their families creates an atmosphere of incitement and cultivates “a culture of hate.” 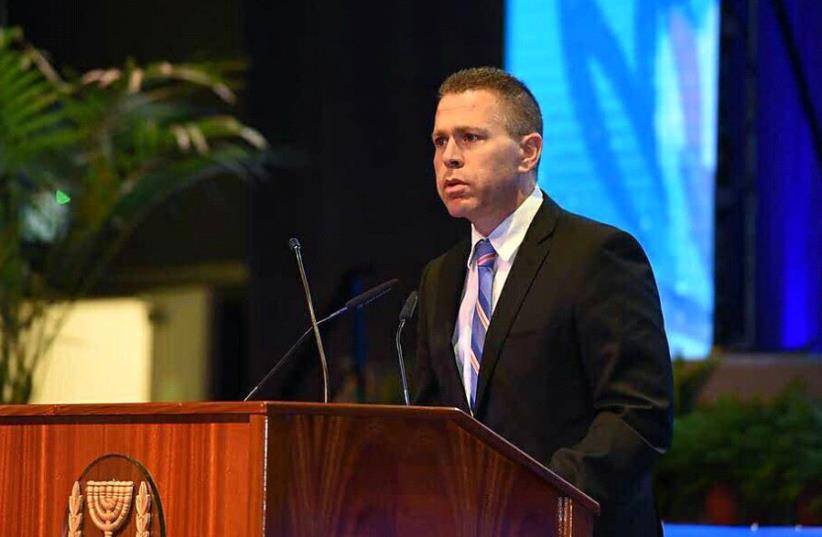 Strategic Affairs Minister Gilad Erdan
(photo credit: COURTESY ISRAEL POLICE)
Advertisement
All countries should pass a law like the US’s Taylor Force Act, which bars the Palestinian Authority from making so-called “martyrs payments” to the families of terrorists, Strategic Affairs Minister Gilad Erdan told a Jerusalem anti-BDS conference of international lawyers on Monday.Erdan told the conference that the PA’s hand in making payments to terrorists and the families of terrorists creates an atmosphere of incitement and cultivates “a culture of hate.”Pivoting toward fighting the Boycott Divestment and Sanctions campaign, Erdan said that BDS supporters restrict the IDF from protecting civilians from attacks by Hezbollah and Hamas.“Courts of law are used to try to prevent the IDF from fighting terrorists who show disregard of any law... attacking Israeli children, while hiding behind Palestinian and Lebanese children,” he said.Furthermore, the BDS campaign threatens artists on social media who want to perform in Israel and threatens companies who do business in the country, he said. “Boycotters are not interested in human rights or humanitarian law. They couldn’t care less about human rights violations in Iran, Syria and other parts of the Middle East.”BDS supporters, he continued, “refuse to recognize the legitimacy of the Jewish state anywhere in the Middle East,” adding that the campaign was simply an effort to destroy Israel after failed military efforts proved that the country could not be defeated on the battlefield.In addition, Erdan said, “The BDS movement seeks to drive Israel and the Palestinians apart... delegitimizing Israel and putting up barriers between the sides.”Opposition leader Isaac Herzog echoed this point saying that, “Boycotts of all nature are adverse to the cause of peace,” arguing that boycotting West Bank businesses could hurt tens of thousands of Palestinians who work there.He added that the origin of BDS runs back decades to international efforts to undermine the fundamental right of Jews to self-determination in their own state.Attorney-General Avichai Mandelblit said that the BDS campaign, “uses lawfare as a strategy” and seeks to use “international arenas to advance delegitimization as a policy.”Mandelblit said that Israel and its lawyer supporters have helped convince “courts around the world” to “repeatedly reject” BDS as contradicting principles of equality.The attorney-general also warned of BDS sympathizers abusing and inverting the principle of corporate social responsibility to try to use it as a sword against Israel.Yifa Segel, International Legal Forum Director and co-sponsor of the conference along with the Israel Bar Association, praised the gathering of lawyers from 24 countries for “sharing our vision” of a strong network of lawyers “in every corner of the world” who would “slowly but surely expose the true face of the BDS movement.”