26-year-old beachfront busker crushed his guitar over the head of a terrorist Tuesday night on the Tel Aviv-Jaffa promenade. 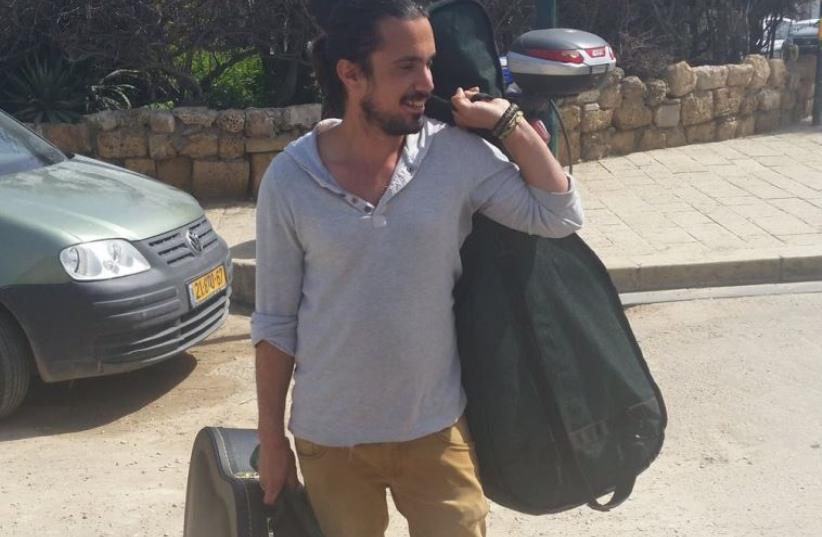 Yishay Montgomery, Israel's 'Guitar Hero'
(photo credit: BEN HARTMAN)
Advertisement
“Guitar Hero” Yishay Montgomery’s 15 minutes of fame may end soon, but for now he just wants to sleep.The 26-year-old beachfront busker who crushed his guitar over the head of a terrorist the previous night on the Tel Aviv-Jaffa promenade said Wednesday morning he’d hardly slept since because he’d been busy fielding call after call from reporters and loved ones, as well as being stopped by random people on the street.By late morning, Montgomery had already appeared on the Orly and Guy morning show and later was to appear on Guri Alfi’s Today at Night program, and couldn’t decide whether to go back to busking or take a nap.Returning on Wednesday to the scene of Tuesday night’s attack, Montgomery was carrying a brand new 12-string “Guild” acoustic guitar he was given minutes earlier by the Halilit music store a few doors down. An employee said they had decided to reward his heroism (and a little product placement couldn’t hurt).Another employee said he had been next to Montgomery when the busker crashed his acoustic guitar over the head of the terrorist, and told his bosses the street performer should be rewarded.

'Guitar Hero' who attacked terrorist last night back at scene of attack with free guitar he was given by music store pic.twitter.com/XigQaQ3JlX
— Ben Hartman (@Benhartman) March 9, 2016

Montgomery was also given a guitar by rocker Aviv Geffen and is now the subject of a GoFundMe page that is collecting money to replace his guitar or, it now seems, to buy a storage space for all the replacement guitars that keep coming in.Tired and squinting in Wednesday’s mid-day sun, Montgomery tried to recount the previous night’s events.“I saw a crowd of people panicking and then the terrorist broke through and started running toward me. We made eye contact and I thought I’m next to get it. Then I fell, and I think my clumsiness saved me because it created some space between me and the knife. Then I got up and hit him with the guitar because it’s what I had.”At that point, the terrorist continued running, leaving behind a headsized hole in Montgomery’s guitar.The attacker, 21-year-old Bashar Masalha of Kalkilya, was shot dead by police further down the promenade.Taylor Force, a 29-year-old Vanderbilt University graduate student who was visiting Israel on a school trip, was killed in the attack. In a strange twist of fate, Force is a native of Lubbock, Texas, as are Montgomery’s father and grandparents.Montgomery has become something of an Internet sensation since Tuesday night, with Israelis praising his heroism as the latest civilian to use the tools at his disposal to stop a terrorist.He joins previous civilians who have used nunchakus, umbrellas and a selfie-stick to fight off attackers since the latest wave of violence began in October.Montgomery, who was wearing a t-shirt with an emblem of the American rock band “Tool” when he was interviewed at the scene Tuesday, said the band hasn’t reached out to offer to fly him to a concert, but he’s game if they call.Montgomery – who lives in Be’er Tuviya and is a full-time busker – was trailed by a new admirer who saw him at Halilit, a young man who didn’t want his name given because he was on sick leave from the army and was hanging out at the beach.“I wish I’d been here last night, I would have hit the terrorist with my guitar and gotten a new one, too.”