‘Half of Israel’s kids getting a Third World education’

“The education that Israel provides to its Arabic-speaking children is below that in many Third World countries." 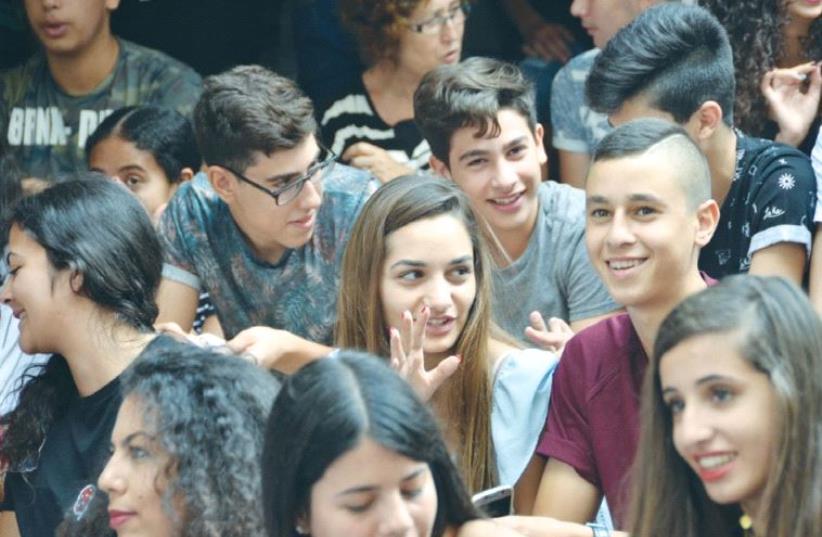 ARAB AND JEWISH STUDENTS gather on the first day of school Thursday at Jerusalem’s bilingual Max Rayne Hand in Hand School.
(photo credit: AMAL MATTAR)
Advertisement
Israel’s primary and secondary students rank among the lowest in the developed world in standardized math, science and reading exams, the Shoresh Institution for Socioeconomic Research reported in its “Education Report Card,” released for publication on Wednesday ahead of the new school year.Despite having far more school days than any other developed country, Israel scored among the lowest in core subjects in 2016, according to the OECD. Israel’s six-day per week school year averaged 219 days while the rest of the countries included in the study averaged fewer than 200 days.The “report card,” based on research compiled by Tel Aviv University Prof. Dan Ben-David, the president and founder of Shoresh, found that in a compilation of data put out by the Program for International Student Assessment, or PISA, and Israel’s National Authority for Educational Measurement and Evaluation from 2015, the average achievement score for Israeli primary students was in the bottom five percentile among 25 OECD countries. The average score for Israeli students was 291, while the average of Japan, the top scoring country, was 369.“The weakest Israeli pupils score below the weakest pupils in each of the other developed countries,” Ben-David said on Tuesday. “The future ability of these children to attain the skills needed to successfully contend with a global, competitive economy is severely handicapped by the poor level of education that they are receiving today.”More alarming, according to Ben-David, is that Israel’s top scorers (the top 5%) came in the bottom third of students from the developed world. Following up PISA and National Authority for Educational Measurement and Evaluation data, the institute indicated that the national average in exams for Israel’s top scorers was 643, compared to South Korea, whose top scorers did the best, with an average mark of 670.Both sets of results exclude ultra-Orthodox haredi boys. According to a 2015 Trends in International Mathematics and Science Study, or TIMSS, 23% of Israeli students are excluded from international standardized tests, compared to the world average of 5%. Haredi boys, Ben-David said, are excluded from the exams because they, largely, do not study the required learning materials from the Education Ministry.“The magnitude of the distortion in Israeli test scores can be intuited by the degree of disregard that the country has for international norms on exam coverage. In the TIMSS math and science exams, countries are allowed to exclude up to 5% of their pupils (such as special education pupils, or those living in far-flung rural areas). Nearly all participating countries abide by the rules. The huge outlier is Israel, excluding nearly a quarter of its children.”Another issue of concern, according to Ben-David, is public expenditure on public and private secondary education.According to data collected by the OECD in 2013, Israel ranks at the bottom for public expenditure per pupil relative to GDP per capita at just 10.9%, and the highest on private secondary education, at 41.5%.“In lieu of transparency in Israel’s budgets, it is hard to discern where exactly this money is being directed or how it is being spent,” said Ben-David.“According to Israel’s Central Bureau of Statistics, a private school is considered a school receiving less than half its income from public funds. A major share of Israeli schools considered private under this definition are haredi schools.”Half of Israel’s students are getting a Third World education, he said, noting that, in addition to the haredi boys, Arab students also are not being provided with the tools and conditions to move ahead.“Even without the haredi boys, the average score of the remaining Jewish children is below most of the developed countries,” he added. “The education that Israel provides to its Arabic-speaking children is below that in many Third World countries. In fact, Arab-Israeli pupils attained a lower score than the average scores in most of the predominantly Muslim countries participating in the exam.”TIMMS has been including Arab-speaking Israeli students in its results since 1999 and, although their test scores in math, science and reading have been improving consistently, these students are still lagging behind.According to the PISA 2015 average level of education in the developed world, which measures Hebrew-speaking and Arabic- speaking Israeli pupils separately, results of Hebrew-speaking pupils, although still at the bottom half of a list of 25 countries, were 103 points higher than those of Arabic speakers.To prevent a future downward spiral, Ben-David recommends defining a core curriculum that is uniform and mandatory for all students; changing how teachers are chosen, trained and compensated; and reorganizing the Education Ministry.“This is the second-largest budget after defense; it is inconceivable that it is run in such a way,” he said.