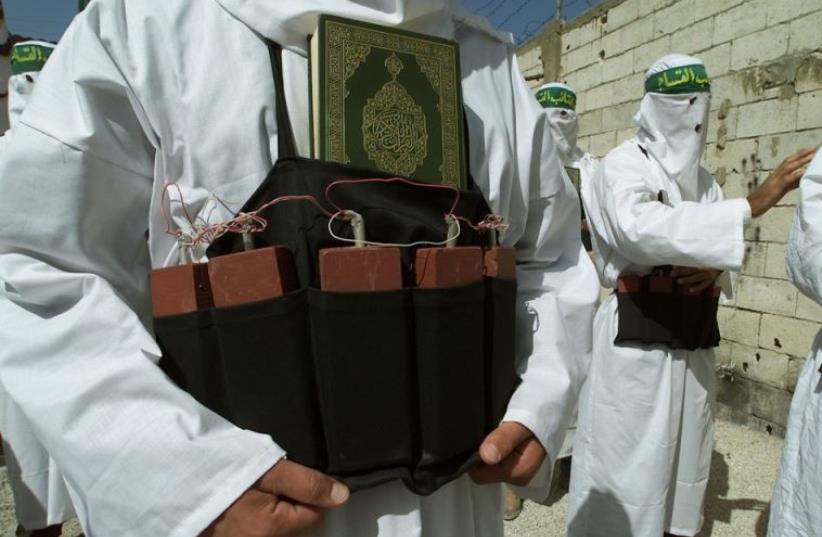 A Palestinian from the Islamic group Hamas carries the holy book the Koran tucked into a belt of simulated explosives
(photo credit: REUTERS)
Advertisement
Hamas praised a vehicular ramming attack that killed one Israeli and wounded another in the Binyamin region of the West Bank on Thursday.“We bless this heroic ramming attack at the Ofra intersection near Ramallah, which is a response to the continued crimes of the Zionist occupation at the expense of our people,” said Hamas spokesman Abdul-Latif Qanou.The motorist suspected of intentionally plowing into the victims was detained by Israeli authorities at the scene.
Scene of ramming attack in Ofra junction, April 6, 2017 (credit: MDA)
Soon after the assault, another Hamas spokesperson, Hazem Qassim, said that terror attacks against Jewish targets would continue, declaring that the use of violence "will only end with freedom.""Once again, the Jerusalem Intifada proves that it isn't a passing event, but rather a Palestinian decision to continue the struggle until freedom from occupation.""There is no safety for the occupation army or settlers as long as they deny our rights, occupy our land, and attack our people and its holy sites," he added. The attack occurred on Thursday morning near a bus stop on Route 60, just outside of the Ofra settlement, according to authorities.Magen David Adom said that the two victims were young men. The second victim, 19, was fully conscious after what the IDF said was an intentional attack. He was taken to Hadasah Medical Center in Jerusalem's Mt. Scopus and was whisked into surgery.The suspected attacker was quickly taken into custody by security forces and is still alive.The suspected Palestinian assailant was named by the Palestinian Authority military liaison as Malik Hamad, 22, from the West Bank town of Silwad, according to Palestinian news site Wafa. The attack comes as Israeli officials have warned of a possible increase in violence surrounding the Passover holiday. Security forces regularly step up their preparedness prior to the holidays, regularly imposing closure on the West Bank as there is often an uptick in tensions and violence.

Tovah Lazaroff and Adam Rasgon contributed to this report.