TEVA NAOT owner Steve Lax (right) and Teva manager Michael Illouz ‘play catch’ with Naot shoes in Tel Aviv
(photo credit: MARC ISRAEL SELLEM/THE JERUSALEM POST)
Advertisement
A gold ring with the word “Happiness” engraved on it in ancient Hebrew script flashes before my eyes. Worn by Teva Naot manager Michael Illouz, the jewel shines a light into the inner working of the shoemaking business as he sees it. Employees of the company are encouraged to keep a happiness diary to monitor good things that happen to them, and as Illouz sports with Naot owner Steve Lax, tossing shoes back and forth in the business lounge on a top floor of the David InterContinental Hotel in Tel Aviv, with a panoramic view the coastline of Tel Aviv for background, their wide grins signify that these two men are having plenty of fun working together.A glance at their feet reveals that brand loyalty is taken very seriously here. The two men are wearing sandals produced by their own firm; the third board member present, Susan Lax, the owner’s wife, is no less loyal, sporting a cork-color Caprice wedge Naot sandal.Susan – whom Illouz calls “the mother of our firm” and Lax both laud for her “extra-special capacities to deliver emotions – projects an earthy, yet stylish, no-nonsense attitude and is immensely proud of the work accomplished by the firm.“In NYC, it’s not uncommon to see women walking around with two pairs of shoes,” she says, “a pair of sport shoes to walk comfortably to work or a social event and a pair of high-heel shoes to wear during the presentation or the dinner. With our shoes, a woman can walk in comfort at all times.”THE WIDE grins Illouz and Lax share are a tad misleading.“When we first met we fought like two cats,” confesses Lax. “From my point of view, he was messing with my company.”Illouz was brought to run Teva Naot in 1998 when the well-established Israeli footwear company, originally called Ga’aton Shoes in 1942 when it was established in the western Galilee during the British Mandate, was deep in the red.The firm was hit by three major events: the 1983 Israel bank stock crisis, the kibbutz crisis of the early 1980s and the government decision to abolish the high customs duty that was in place to protect local footwear companies from cheap foreign imports.Illouz decided that Teva Naot, the company associated in the Israeli mind with sandals since the prestate period, must sell to the world outside Israel and it must sell a variety of items.“Within three months we were showing a profit,” he says, “a 3% profit, mind you, but still a profit.”Lax bought the company in March 2014 and under his control, Teva Naot, known outside Israel simply as Naot, began to diversify in profound ways. Currently the firm offers hand-painted shoes the client can design him- or herself, wedding shoes that give tired brides a way to look elegant at the reception as well as dance the night away, indoor shoes and even, in the future, vegan-friendly shoes that can be worn with full confidence that no animal products were used to make them.The results, especially in the North American market, had been impressive – from noted actors such as Bill Murray wearing Naot shoes for a round of golf with then-US president Barack Obama to the emergence of Naotics, clients who enjoy their shoes so much they ask to be featured in a blog the company maintains. The March entry for this year includes “Charleston blond” Jaime Huffman and Gabriel the Mensch, who seems taken with his Pilot boots (Huffman opted for Helm Arizona Tan).Shoe names and colors are carefully decided on after a hefty amount of research and testing. One of the new autumn shoes is called Leveche, a Spanish word used to describe a warm southwest wind near the Mediterranean. Leveche shoes are produced using Strobel machines, named after Johannes Strobel who in 1883 bought the German company that makes them. This way of constructing a shoe means that the upper material is sewn to a fabric bottom. To finish the shoe, a shoe insert is placed into it. This creates a flexible shoe with a special modification element included as the shoe insert can be altered to fit the needs of various clients who might be flat-footed or need extra support.Teva Naot imports all the various materials that go into the making of quality shoes from Western Europe and the shoes are manufactured in two locations in northern Israel: the historic factory in Kibbutz Neot Mordechai and a factory used by Israeli shoe company Dafna (they were bought by Naot in 2007). Each pair of shoes passes 50 human hands in the production process and, due to the unique conditions of northern Israel, Lax refers to them as “the shoes of peace.”“We employ haredi Jewish women and Druze, Bedouin, Russian-speakers and Ethiopians – it’s a joy to see and we really do have a little of everything,” says Illouz. 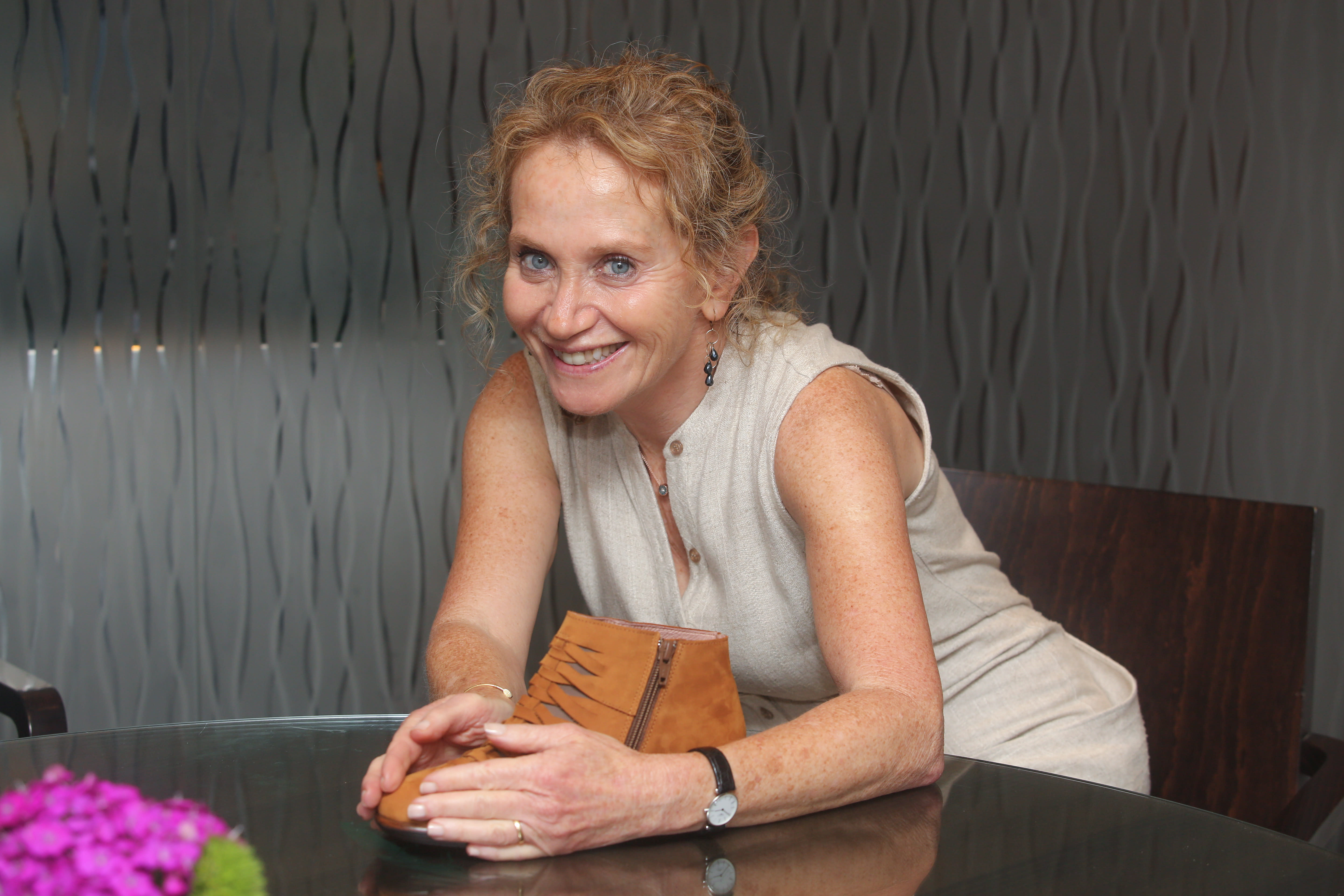 Susan Lax, the 'mother' of Teva Naot (MARC ISRAEL SELLEM/THE JERUSALEM POST)The firm makes a point out of honoring the respective holidays of each group that works in the factories, and for the past 20 years has employed Palestinian shoemakers from Hebron. “It is my conviction that the two nations [Israelis and Palestinians] can live and be prosperous,” not one next to the other but, “because the other people are there,” Lax adds.Teva Naot is not the only Israeli shoe company to employ Hebron-based shoemakers. In an ongoing exhibition created by Prof. Tamar Aleor for the Eretz Israel Museum in Tel Aviv, the history of local sandals and how they came to represent Israeli fashion, is explored in depth. In it, it is revealed that it is common practice among Israeli sandal-making firms to employ Hebron shoemakers because they enjoy a powerful local tradition of manufacturing footwear and leather goods.WHAT MIGHT be surprising is to learn how the sandals that featured straps between the toes were pushed aside by the German-style straps-over-foot-and-ankle ones introduced to the country by Jewish shoemakers from central Europe. Labeled in Germany as “Jesus sandals,” the sandals were re-branded here as “biblical sandals” to underscore the deep connection felt between modern Israel and the biblical kingdom of the same name.This shaped Israeli fashion and style for decades to come. A television commercial made by Reuveni Pridan Advertising for Teva Naot to celebrate 70 years of Israeli independence – not to mention sandal making – presents sandal-clad feet dancing in the specific dancing styles of each decade, from Israeli folk dancing to disco and electronic music.“The Shahar sandal still sells very well in Israel,” says Illouz, “it’s in fashion and children love it and continue to buy from us as they get older.”The shoe insert proved surprisingly useful for the firm when attempting to sell to a very different market from North America or Israel – the Japanese market.“The Japanese have an incredible amount of respect for shoes,” says Illouz. “In their culture, a man walks for 20 years with the same sandal and takes it to be repaired and they are proud to repair it, and he continues to walk with it afterwards.” This basically meant that Japanese clients who purchase Naot shoes can enjoy a high-quality product and repair the shoe insert or replace it, while keeping the shoe, as long as they want to. Another aspect of the Japanese attitude to shoes is that “they are happy to reward good quality by paying generously,” says Illouz and tells me that two models from the Autumn collection were bought in advance by the Japanese firm selling Naot shoes in the islands.Recent dramatic changes in climate around the world, with intensely hot summers and noticeably milder winters, threaten to wreak havoc on the fashion industry, which customarily offers new pairs of shoes for each season. If spring becomes so hot to be almost an early summer, what’s the point of buying two new pairs of shoes? Why buy one pair for spring and one for summer? This also leads to a retail question. Many retailers bought large amounts of shoes for the new seasons only to be stuck with them as clients, especially in North America when the economy was slow, opted to keep their wallets closed and their feet away.What people do want, even in times of economic and climate changes and uncertainty, is comfort and safety. Mentioned in the 2006 film The Devil Wears Prada as the shoes “my dad wears with his jeans,” Naot shoes fit the bill. Dad might have a point after all.THE JEWISH values of the firm go beyond Gabriel the Mensch. “Other companies reduce prices near the end of the year to get rid of their shoes,” Lax says. “We do not. We keep the same prices all year long and give thousands of pairs to people who are homeless or women who are currently in shelters for abused women.”Naot has also been supporting breast-cancer research in the US for over 30 years.“We also donated shoes to Syrian refugees near the Israeli border when that was possible,” Susan adds.Naot is currently expanding its two production centers in the North “and we mean to stay there,” says Lax. “However, we do want to unify and streamline things a little.”The vision for the road ahead is to have a unified message representing Naot around the world. Just like McDonald’s has a global message alongside regional differences in the menus it offers, the same will be true for Naot.“If you look at Nike, for example, you’ll see that all around the globe they have one identity,” Lax says, “That is also what we want to do.”