Ya'acov Litzman made the statement on Thursday, explaining that the government had promised it would cover expenses of the medical treatment of injured Syrians, but has failed to do so. 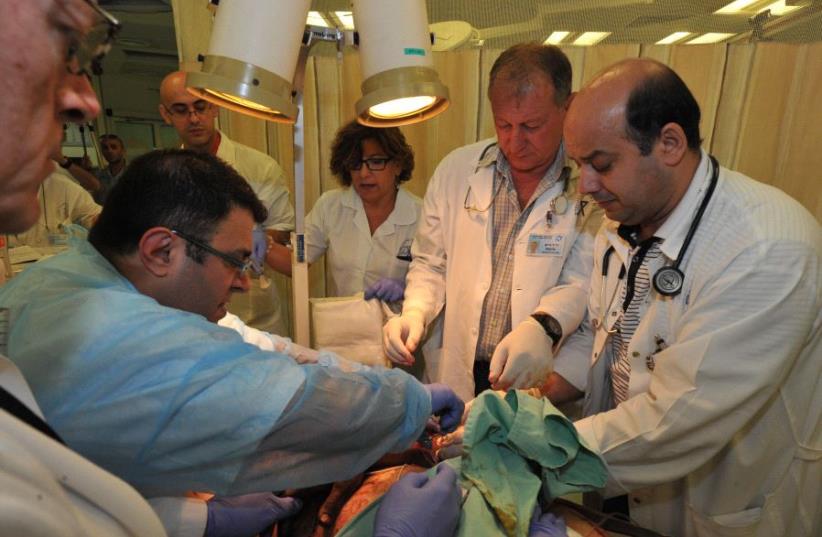 Doctors at the Western Galilee Medical Center treat wounded Syrians.
(photo credit: WESTERN GALILEE MEDICAL CENTER)
Advertisement
If the government does not quickly pay the Western Galilee Medical Center in Nahariya the NIS 300 million it has spent treating some 1,550 Syrian civilians in the past four years, Health Minister Ya’acov Litzman says he will tell the hospital to stop accepting them.The minister said Eli Groner, director-general of the Prime Minister’s Office, was asked by the Knesset Finance Committee to resolve the matter. But if this is not accomplished, the state-owned 772-bed hospital will no longer treat the men, women and children from Syria whose medical facilities have almost collapsed.Litzman made the forceful statement in a meeting on Thursday with the editorial staff of The Jerusalem Post.It costs Western Galilee Medical Center an average of NIS 10,321 per day to treat the Syrians, while the government transfers only NIS 1,300 daily to the hospital. The medical institution is situated only 10 km. from Lebanon, and in the past it has treated Lebanese civilians as well.The Finance Committee held a discussion this week on the issue, and learned that the Defense, Finance and Health ministries were supposed to split the costs equally.The Health Ministry owes a small amount, according to the hospital management, but most of the debts belong to the other two ministries.Hospital director-general Dr. Masad Barhoom was abroad, but a management spokesman said that it initially received funding, but then it petered out. The hospital’s patients have not suffered as a result of the lack of money, but its development – including the opening of new departments and purchasing more advanced equipment – has almost been stopped.“We were asked by the government to carry out this medical task, and we have done it. We have treated and saved the lives of 1,500 babies, children, men and women.We have no idea what has happened to them after their release and return home,” the spokesman said.But the hospital has also benefited from the challenge, as “we have gained much experience and expertise from treating severely injured people suffering from war injuries and trauma of the head, chest, legs and other body parts. We are among the leading medical centers in the world with such expertise, and this benefits Israel.”The Finance Ministry said that the Prime Minister’s Office was in charge of setting the financing for the wounded Syrian patients. The PMO had no comment.