Likud campaign manager, Nir Hefetz, said Netanyahu would never have approved using such a picture in an advertisement. 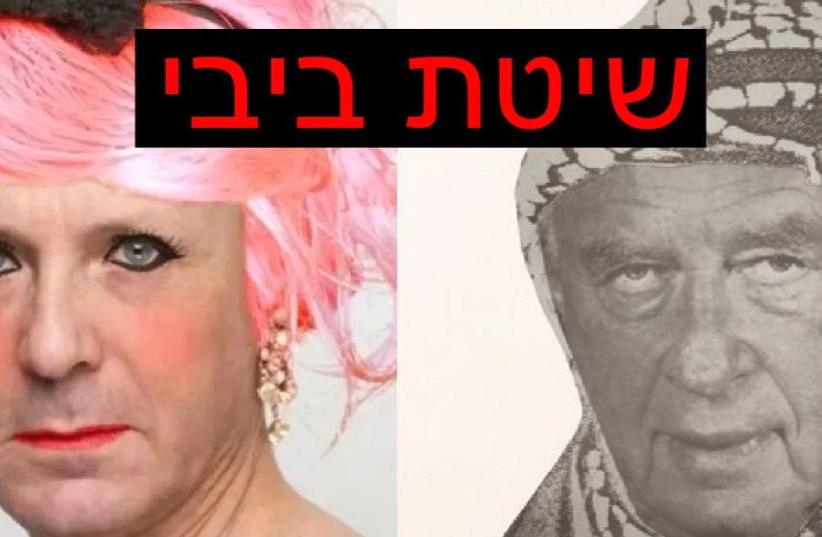 Photo shared by Isaac Herzog on Twitter and Facebook, June 20 2017.
(photo credit: FACEBOOK)
Advertisement
Zionist Union chairman Isaac Herzog posted two pictures side by side on Twitter Tuesday, in an effort to accuse Prime Minister Benjamin Netanyahu of incitement.Under the banner “Bibi’s approach,” Herzog posted a picture of him in drag that, according to a Channel 2 report, the Likud prepared and considered but did not use during the 2015 election campaign. Next to that photo, Herzog placed a poster of former prime minister Yitzhak Rabin in a keffiyeh that was used to besmirch him ahead of his 1995 assassination.“This is racism and the other is Transophobia,” Herzog’s spokesman said. “Incitement is incitement.”


Prime Minister Benjamin Netanyahu and Likud campaign manager Nir Hefetz denied seeing the picture of Herzog in drag before it was broadcast on Channel 2 Monday night. Hefetz said Netanyahu would never have approved using such a picture in an advertisement.But the report said the Likud paid for the picture, as well as one portraying Herzog’s No. 2 in the Zionist Union, Tzipi Livni, as close to Hamas leader Ismail Haniyeh, and a video showing terrorist leaders hoping Livni would win. On Tuesday it was revealed that the ads were spread during the 2015 campaign by a Likud-affiliated website.Herzog said the ads disgusted him and revealed a long-standing personality flaw in Netanyahu that marred his entire career. Livni said the Likud stooped to very negative ads during the campaign, noting a commercial that showed actors playing ISIS terrorists asking for directions to Jerusalem following a Zionist Union election victory.When Livni was asked on Army Radio about a statement she made during the campaign on a satirical show about her and Herzog “taking out the garbage [i.e., Netanyahu] together,” she responded that it was not comparable.“I do not see being portrayed in drag as insulting, but the prime minister cannot do that campaign [ad] and then brag around the world about how gay friendly we are,” Zionist Union MK Shelly Yacimovich said.Zionist Union MK Yoel Hasson said Netanyahu should be prosecuted on charges of incitement to violence against Herzog and Livni.“Netanyahu continues to poison the Israeli public with murderous incitement,” Hasson said. “Netanyahu must be stopped at any price, before the next assassination takes place.”The Zionist Union’s strategist in the 2015 campaign, Tami Shienkman, said she was aware at the time of the negative ads, which were part of a “scare campaign” that culminated with Netanyahu’s Election Day statement in which he warned about the Arabs voting in droves.She said with confidence that no negative campaign ads from her side would come to the surface as happened with the Likud.“There is no missing dirt on our side,” Shienkman said. “People complain when you go negative, and when you don’t, you’re told you’re suckers. But you don’t need to rip apart the nation in order to win an election.”