The ceremony, held by B’nai B’rith and KKL-JNF, will include personal testimonies by Holocaust survivors and rescuers. 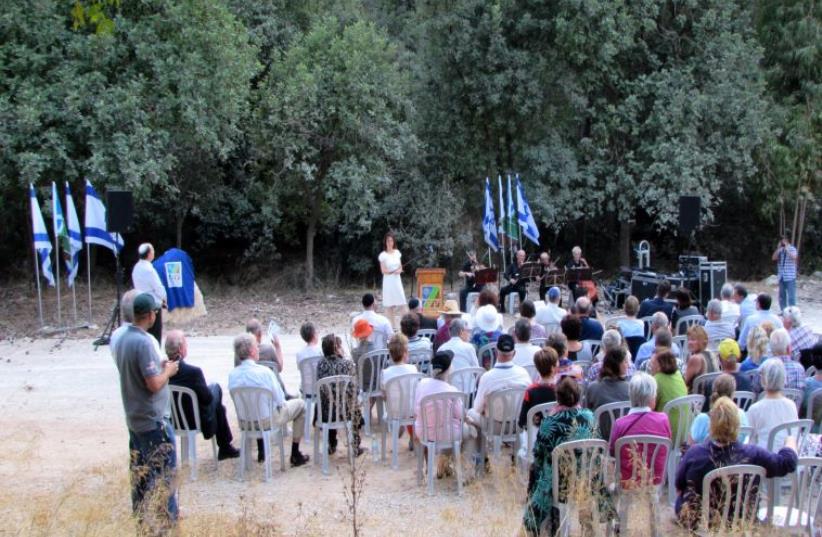 Simon Wiesenthal Path Inaugurated in Martyrs Forest
(photo credit: KKL-JNF)
Advertisement
Approaching Israel's Holocaust Remembrance Day (Yom HaShoah,) the B’nai B’rith World Center in Jerusalem and Keren Kayemeth LeIsrael (KKL-JNF) have announced that they will be holding a joint Holocaust commemoration ceremony.This year will be the 20th consecutive year that the unique event is held in this format.It is the only event surrounding Yom HaShoah dedicated annually to honoring and commemorating Jewish individuals who made efforts to save fellow Jews during the Holocaust. The ceremony will take place on Thursday, April 8, at the B’nai B’rith Martyr’s Forest. Due to coronavirus restrictions, the ceremony will be attended by fewer people and will broadcast live on YouTube. The B’nai B’rith Martyr’s Forest is the result of a comprehensive joint project by B’nai B’rith and KKL-JNF. With an astounding six million trees planted in the Jerusalem mountains, the project attempts to commemorate the six million Jewish victims of the Holocaust. At the center of the forest stands the “Scroll of Fire,” a state created by renowned sculptor Nathan Rapoport. The statue is meant to reflect the plight of the Jewish people during the Holocaust and their salvation in Israel.
Scroll of Fire statue, located at the center of the B’nai B’rith Martyr’s Forest (Credit: Yossi Zamir)
The ceremony will include personal testimonies by Holocaust survivors and rescuers.According to B’nai B’rith and KKL-JNF, this year's ceremony will honors Wilhelm Filderman and Itschak Artzi (Romania), José Aboulker (Algiers) and 10 other rescuers who operated in Poland, France and Belgium. Moreover, for the first time since the ceremony has been taking place, two rescuers from Mandatory Palestine – paratrooper Hannah Szenes and WZO official Moshe Shapiro – will be recognized with the Jewish Rescuers Citation.