About 80 localities with 500,000 Israelis did not hear a single incoming rocket siren during the last round of violence between Israel and the Gaza Strip. 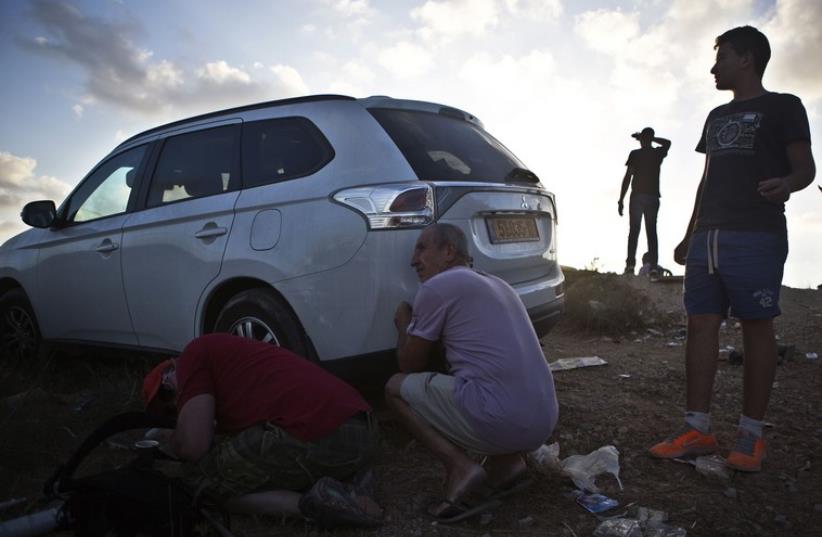 Some Israelis take cover as others look on as sirens indicating rockets being fired to the area are heard on a lookout hill near Sderot, opposite the northern Gaza Strip.
(photo credit: REUTERS)
Advertisement
The new precise warning system implemented by the Israeli military cut down the number of incoming rocket sirens by 50% across the country during the last round of violence between the IDF and Palestinian Islamic Jihad.More than 400 rockets were fired by the Iranian-backed Gazan terror group towards southern and central Israel over 50 hours, shutting down the country for hours and sending millions to bomb shelters.But officers in the Home Front Command told The Jerusalem Post that thanks to the new targeted alert system, about 80 localities with 500,000 Israelis did not hear a single incoming rocket siren.“During the last conflict we saw it in real-time and we were able to see what it does for civilians,” Early Warning Operations Section Head, Maj. Tohar Nitzan, told The Jerusalem Post. “This week we looked at the numbers from operation and saw that had we still been using the old system, there would have been twice the number of warnings. We saved citizens from 50% of the sirens.”Instead of 2.2 million people experiencing an incoming rocket siren, only 1.7 million people were affected by the last round of violence, which for the first time in years reached central Israeli cities like Tel Aviv, Holon and Rishon Lezion.“While there were several rockets fired towards Israel since the implementation, there wasn’t an operation like Black Belt which would have allowed us to see the results of the new system,” said the Head of the Home Front Command’s Hasbara Branch Lt.-Col. Shiran Shimhi.The military has been working for decades to improve its incoming rocket alert system through close dialogue with local authorities and significant technological improvements.The new precise system implemented by the Home Front Command in June warns citizens in specific areas to incoming rocket fire while allowing civilians who are not directly in harm’s way to continue to go about their daily lives.But, Shimhi said, “when the siren goes off, it means that the community and residents are in danger and the civilians have to find shelter and remain in shelter for 10 minutes because the danger is real.”Nitzan told the Post that under the new system, every community in the country has their own specific alert and from some 250 alert polygons, there are now some 1,700 different areas.For example, two Gaza border areas (236, 238) in which there are 13 communities with about 5,000 residents, with the old system the entire area used to be alerted, even if only three communities were at risk of rocket or mortar fire, causing all residents to run for shelter. But with the new system, only the residents of the three communities would head for shelter, sparing thousands from interrupting their daily lives.During the violence in early November, under the new warning system, the community of Shlomit had no sirens whereas under the old system there would have been 10; the Talmei Eliyahu in the Eshkol Regional Council heard two sirens instead of 17; and the community of Alumim heard 24 sirens instead of 68.As part of the effort to make the alert system as specific as possible, large municipalities have been split into separate alert areas with Jerusalem, Haifa, Hadera, Tel Aviv, Beersheba and Ashdod split into four different alert areas with other cities like Herzliya, Rishon Lezion, Netanya split into two areas.Another 60 national infrastructure facilities, hazardous chemical facilities, industrial areas and hospitals have also been given specific warning polygons.According to Nitzan “there are some communities that didn’t hear even one siren during the last round, whereas in the last system would have heard 10.”Other communities which had sirens activated significantly less than in the past include Or Haner which had one siren instead of 19, Ashdod which had three instead of 15 and Ness Ziona which instead of hearing three sirens heard none.“Ashdod which is home to a quarter of a million people, thousands of people didn’t have to run to shelter when before they would have had to,” Shimhi said.Data given to the Post showed that the 225,000 residents of Ashdod were saved from running to shelter dozens of times and the approximately 252,000 residents of Rishon Lezion were spared from running to shelter three times.Nevertheless, residents in the south still need to run for shelter with several rockets fired from Gaza towards southern Israel which has been hit by hundreds of thousands of rockets for over 18 years.Shimhi told the Post that the warnings of incoming rockets is available on their website, application and Telegram channels.“The public asked to know about all the warnings so there are various ways to know what’s happening around them, including channels on Telegram for the center of the country as well as for the North and South that we opened on November 5th, which have 7,000 followers. It’s a quiet channel that we only use for alerts,” she said.With a whole generation of Israelis having grown up under fire and running for shelter at a moment’s notice, Nitzan hopes the next generation won’t need to follow suit.“I want to hope that the next generation will be better than the last generation that grew up under sirens. We have been able to cut down the number of sirens that the residents of the South hear by 50% and I hope that in the coming years we will go down to zero,” she said. “But that also depends on the other side. We on our side are doing all we can.”