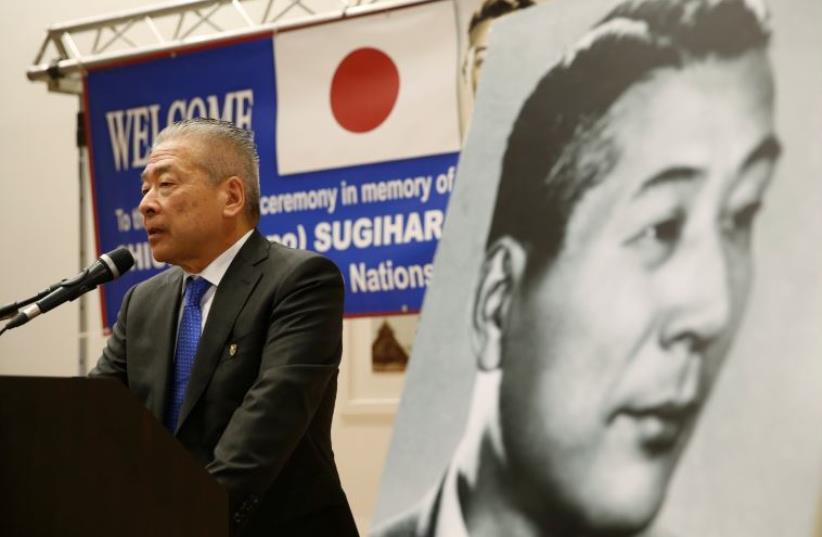 Nobuki Sugihara, son of Japanese diplomat, Chiune Sugihara (depicted in black and white picture), who helped saved thousands of Lithuanian Jews in World War 2, speaks during a street-naming ceremony in honor of his father in Netanya, Israel June 7, 2016
(photo credit: REUTERS)
Advertisement
Japanese diplomat Chiune Sempo Sugihara will be honored with a commemorative plaque placed at the Chamber of the Holocaust museum on Mount Zion in Jerusalem on Sunday. Founded in 1948, the Chamber of the Holocaust predates Yad Vashem and is the only Holocaust museum in the world that includes soaps which it claims are made from the bodies of Jewish victims of the holocaust. While serving in Lithuania, Sugihara issued over two thousand travel visas to Japan, an act he was not authorized to do by his superiors and saved the lives of Jewish refugees fleeing from the Nazis. The Japanese diplomatic service fired him for his actions in 1947. Despite gaining official recognition as Righteous Among the Nations in 1985 from Yad Vashem, he refused to get any awards for his deeds other than a scholarship his son accepted in order to study in Israel.