The protesters marched towards road 60 and walked all the way to the tunnels checkpoint, separating Bethlehem area from Jerusalem. 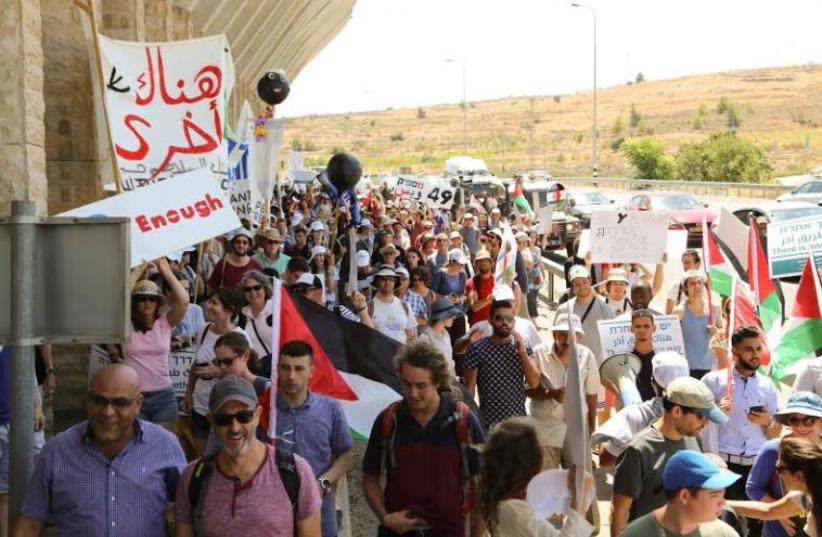 Israelis and Palestinians marching next to the separation barrier on their way to the Tunnels Checkpoint.
(photo credit: COMBATANTS FOR PEACE)
Advertisement
Some 600 Israelis and Palestinians participated on Friday in the 'Israeli-Palestinian Freedom March,' held by the Tunnels Checkpoint at the West Bank. They called for "a better future for both people, a future of peace, justice and equality." The demonstration, marking the tenth year anniversary of Combatants for Peace was organized in cooperation with Standing Together.The march started from the entrance of Battir village south of Bethlehem. The protesters marched towards road 60 and walked all the way to the tunnels checkpoint, separating Bethlehem area from Jerusalem. During the march, accompanied by IDF forces, activists and members of Combatants for Peace used hand-made puppets to close the road and then used it during the protest as they chanted anti-occupation slogans and demanded "the end of occupation and the establishment of peace." 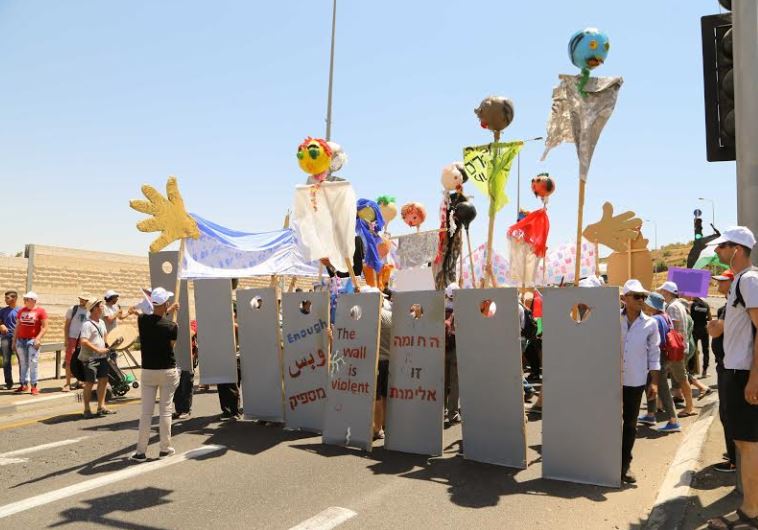 Israelis and Palestinians holding a visual representation of the separation wall moments before dropping it, illustrating their hope for a future without it (Credit: Combatants for Peace)The event was attended by American filmmaker Stephen Apkon, who directed the new documentary film 'Disturbing the Peace,' which had a successful world premiere screening on Thursday at the Jerusalem Film Festival. Other special guests at the Freedom March were Alistair Little and Jerry Foster, a Catholic and a Protestant, respectively, who fought on opposing sides during the conflict in Northern Ireland. They said at the protest: "You are not alone in your struggle. Part of our journey is about re-humanizing one another, understanding human suffering. I have worked in many parts of the world, you are an inspiration, a challenge to end the occupation.""As a Mizrahi woman, I feel a deep obligation to stand by my Palestinian brothers and sisters, because both of us are struggling against oppression," said Netta Hazan, Israeli activist in Combatants for Peace, regarding recent events in Israel. "Both Palestinians and Mizrahi people in Israel are subject to discrimination. The method of the establishment is to create a common enemy, the Arab, in order to control us. But many Jews and Muslims still coexist together in harmony, it is possible. I believe that another way is possible; together we can create a non-violent culture."Israeli-Arab singer Mira Awad, that also attended the march, performed the song "Think of Others" by the Palestinian poet Mahmoud Darwish. The event included a visual representation of the separation wall, and at the end of the demonstration it was fallen by the activists, illustrating their hope for a future without it.