“We think this government is a disaster for our country,” one of the organizers shouted to the crowd to a chorus of boos. 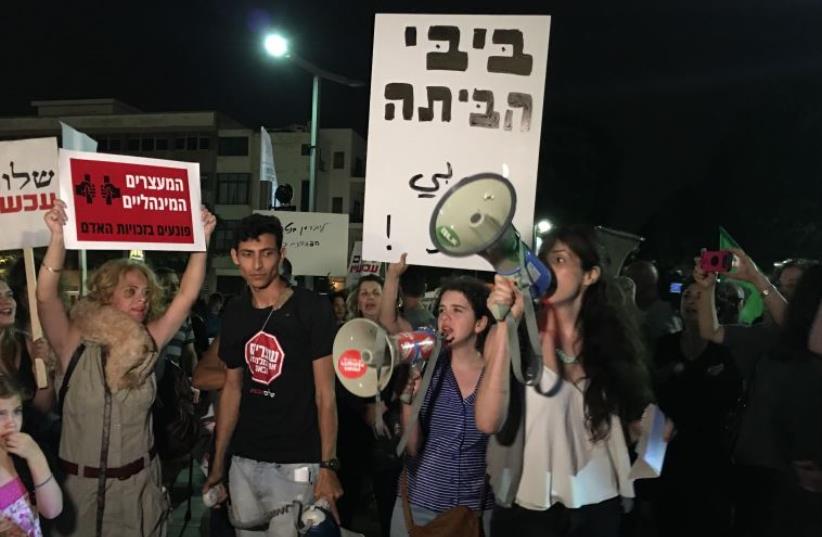 Israelis protest new government in Tel Aviv
(photo credit: Courtesy)
Advertisement
A few hundred protesters gathered in HaBima Square in Tel Aviv on Saturday night to protest the new political coalition and the appointment of MK Avigdor Liberman as Defense Minister.Amid a heavy police presence, dozens of activists holding green Meretz flags and Peace Now signs chanted slogans such as “Bibi you failed, Bibi go home” and “We don’t want more victims, Liberman is a minister of war” to the crowd.The protestors called for the ouster of Prime Minister Binyamin Netanyahu and dubbed the new coalition the “most right wing government in the history of the State.”“We think this government is a disaster for our country,” one of the organizers shouted to the crowd to a chorus of boos. “There is no future or vision, this government is a disaster,” she said.MK Tamar Zandberg addressed the crowd calling this the week of “combinot” or political deals.“This week we reached new heights of extremism and an even more right-wing government” she said.She told the crowd that every red line had been crossed in order to ensure the political survival of Netanyahu and other right-wing politicians.Zanberg had especially harsh words for Liberman, calling him “corrupt” and a “racist” and said that he showed no promise in his ability to take on the role of defense minister.Despite her criticism, she added however that this week also served as a “wake up call” to all the citizens of the country who oppose the direction in which the government is headed.“This is a week of political deals but it is also a week of choice,” she said.Zanberg said the people had to make a choice between a right-wing government that could lead to another war and between “hope, the end of the occupation, equality and democracy.”The Meretz MK also had harsh words for Zionist Union leader Isaac Herzog who she said had “given up” and opted for a seat in the current government to secure his political survival.She added that the opposition would provide a better alternative solution to the right-wing coalition and promised that “from tonight there is a real opposition.”The crowd continued to chant more slogans such as “Avigdor Liberman is a racist and a fascist” and “Bibi, Bennett, Liberman, how did we get to this point?” for over an hour. When asked what they thought of the current government the crowd responded with boos and more shouts for “Bibi go home.”