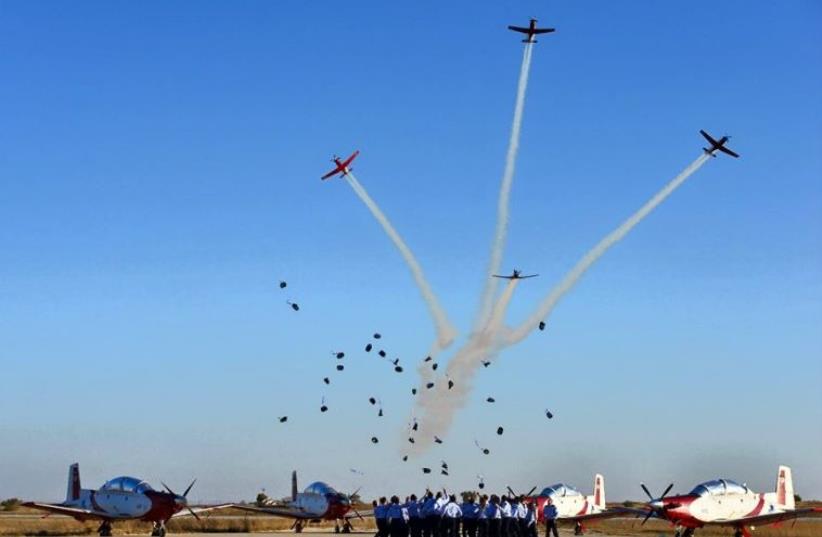 IAF welcomes new pilots
(photo credit: PRESIDENTIAL SPOKESPERSON OFFICE)
Advertisement
The Israel Air Force is "highly disturbed" by the drastic rise in the threat of ballistic missiles to Israel, and the ongoing Middle Eastern arms race, a senior air force official said on Sunday.Speaking at a conference in Tel Aviv organized by the Fisher Institute for air and Space Strategic Studies, and Israel Defense magazine, Brig.-Gen. Tal Kelman, Chief of Staff in the Israel Air Force (IAF), provided a glimpse into the central challenges engaging air force command.Kelman issued a warning about the "very significant rise in the ballistic threat" to Israel," citing a rise in the accuracy and quality of missiles held by adversaries in the region. "This greatly disturbs us. There is a solution that has been under development in recent years," he said, referring to the "integrative, multi-layer" rocket and missile defense systems that includes Iron Dome, David's Sling, and the Arrow programs.These have "a good ability to defend. Not hermetically, but very significantly," he said."The region is in a raging storm. Everything is changing. There are some developments in recent months that would not necessarily have predicted," Kelman added."The Middle East is in an arms race, which has intensified a great deal recently. States [that have remained intact] are in the midst of purchasing advanced Western and Eastern weapons. This includes planes, surface-to-air missiles, and ballistic missiles. They are spending hundreds of billions of dollars on this. Combined with the instability in the region, this poses a big danger. An enemy today can become a friend tomorrow, and a friend today can become an enemy tomorrow. There is a potential for Israel to lose its qualitative edge. This disturbs us," Kelman said.He cited "the very significant awakening of extremist Islam and the global jihad movement in states around us," adding, "Some of those states have vanished. Others have had revolutions and counter-revolutions." This has created an environment rife with terror organizations waging asymmetric warfare from civilian population centers, the air force chief of staff stated.The nuclear deal between the P5+1 countries and Iran "pushes back," Iran's nuclear program, but in the meantime, the Islamic Republic's economy and weapons industry are leaping ahead, Kelman warned. Iran is injecting weapons into the hands of terrorists in the region, and its activities will continue to engage Israel, he said.Alluding to the recent debate raging in Israel about the need to strictly adhere to the IDF's moral code, Kelman said that the IAF's commitment to "the purity of arms has been central to us. It is a huge effort in any mission, to reach the target while meeting the mortal standards of the IDF, and of the Jewish people. From this stage, I must say that the IDF has been carrying this out to a very unusual extent, in the positive sense of the word."Addressing the IAF's preparations to receive the fifth-generation Lockheed Martin-produced F-35 fighter jets, Kelman said the aircraft will become operational "within a year of landing in Israel.""A big part of my working week dedicated to receiving the F-35. The official date that the first two planes will arrive at Nevatim airbase is December 12, 2016," he added."We understand that the IAF must adapt itself to the F-35," he said referring to the new squadron being set up, and the need to restructure other elements of the air force to receive the platform.Kelman said the advanced plane's arrival also represented an opportunity for Israel to influence the rest of the program, since "after landing here it will gain a lot of operational experience very quickly. We will be able to embed our lessons learned in the rest of the absorption process," he said.He also said Israel is seeking to "maximize maintenance independence," as part of a gradual progress underway with Lockheed Marttin and the US. "We are getting a very receptive ear to our requests," he said.Kelman launched a strident defense of the plane. He dismissed a number of press reports that claimed delays and technical problems, as well as prohibitively high costs, as having a "weak connection with reality."Gen. (ret.) Gary North, Vice President of Customer Requirements at Lockheed Martin Aeronautics, said the F-35 will become an "integral piece" of the future battle space. "Your neighborhood is not easy," he said, describing it as an "asymmetric terrorism environment" that will "get tougher as the years go by."The F-35 will enable the IAF to operate in contested battle spaces, and let pilots become "battle space managers" since the aircraft will handle the fusion of sensors and data for them."In the Fifth Generation future, speed is still important... but information is the new speed," he said, citing the plane's ability to lock in on "mobile threats, people who shoot and scoot and hide in urban environments."The F-35 carries 18,2000 pounds of fuel, enabling it a 1,220 kilometer battle radius. "It can go a long way, or loiter for a long time," North said. It can carry 18,000 pounds of ordnance. Its eight million lines of code mean that pilots no longer have to manually operate radars, targeting pods, and other vital functions.