Navy to receive total of 11 systems as part of ongoing upgrades to fleet. 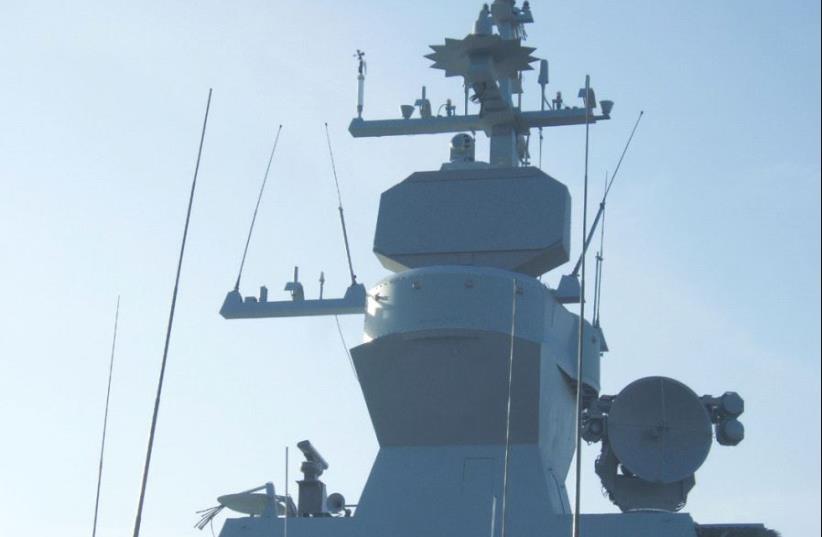 ALPHA RADAR is seen on an Israel Navy Sa’ar-4.5 missile ship
(photo credit: IAI)
Advertisement
The Israel Navy is a step closer to upgrading its entire combat surface fleet, as Israel Aerospace Industries announced that it has completed the installation of the advanced ALPHA radar system on the Sa’ar-4.5 missile ship and is proceeding to operational sea trials.The Navy is expected to receive two more ALPHA (Advanced Lightweight Phased Array) ELM-2258 radar systems by the end of the year, for a total of 11 systems installed on the missile ships.A statement released by IAI described the lightweight ALPHA radar system as being based on “unique full-digital AESA technology by IAI unit ELTA Systems Ltd., and is an integral part of the combat systems” installed on the missile ships.The small size of the radar system allows it to be installed on small- and medium-sized vessels such as the corvettes, the Sa’ar-4.5 missile ships and medium- sized patrol boats. Built by Israel Shipyards and transferred to the navy in the 1990s and the 2000s, the Sa’ar-4.5 missile ships weigh 490 tons and are 62 meters long.The advanced radar system, which provides a solution for the upgrade needed on existing navy vessels, is capable of producing a large number of simultaneous beams for maritime and aerial targets, and is able to provide a high-quality situation picture in the most extreme marine environment.The radar system is able to carry out several tasks simultaneously, such as tracking a large number of targets, detection and classification of naval targets, as well as the integration of guided missile systems for defense and attack.According to a statement by IAI, the ALPHA radar system “will upgrade the operational capabilities of the Israel Navy missile ships Sa’ar-4.5 and Sa’ar-5, and will be an integrative part of the future operational capability of the vessels.The system provides one of the most advanced operational solutions in the field of naval situation picture, and its light weight enables it to be installed on a large variety of maritime platforms.”As part of the upgrading of the fleet at the end of April, the US State Department approved Israel’s request to buy 13 76-mm.naval guns and other spare parts at a cost of $440 million to be installed on the Sa’ar-4.5 as well the Sa’ar-6 warships which will guard Israel’s gas fields.The deal also includes preventive maintenance, test equipment, holding and transportation fixtures and technical manuals. The arrangement will also see the US government and the contractor, Leonardo subsidiary DRS North America, provide engineering, technical and logistics support services as well as site surveys of vessels and maintenance facilities.The navy also received the first of three Super Dvora Mark IIIclass fast patrol craft in November and is expecting to receive four new Sa’ar-6 class warships, which are due to arrive in Israel by 2020 from Germany.