Loitering missile can stay in the air for up to 6 hours before crashing directly into target with 15 kg. of explosives. 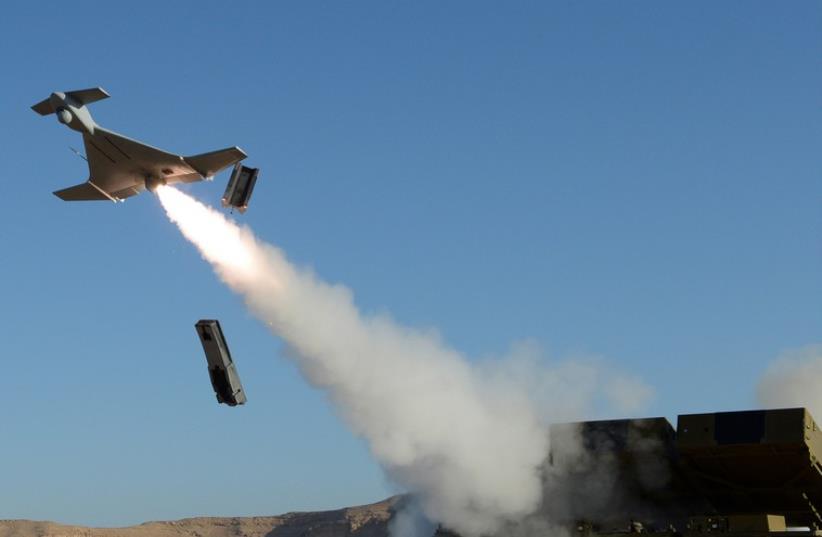 IAI's HAROP Loitering Munitions
(photo credit: COURTESY IAI)
Advertisement
Israel Aerospace Industries completed a series of test flights of its HAROP Loitering Munitions ‘suicide drone’ in Israel recently for foreign clients, the defense corporation announced on Sunday.During the demonstration, the HAROP system, which can stay in the air for up to six hours and loiter above targets before crashing into them and detonating onboard explosives, displayed “augmented capabilities” in its observation, altitude and loitering capabilities, IAI said.
IAI exhibits upgraded HAROP "suicide drone"
“These demonstrations follow various other successful operational exercises performed in the last few months for different customers,” the company added.The HAROP also exhibited “better maneuvering and target destruction.”During the exercises, the missile loitered for several hours until the target was selected. Then, with maximum precision, it dived directly on to it,” according to IAI.A HAROP unit is comprised of launchers and a Mission Control Shelter, from where the missile is controlled with a human-in-the-loop operation, engagement or abort attack capability in real time.HAROP systems have a warhead of 15 kg. and can be used in a range of battle scenarios, including low- and high-intensity conflict, urban warfare and counter-terrorism operations.Once a target, whether stationary or moving, is detected, it is attacked and destroyed. The attack can be performed from any direction and at any attack angle, from flat to vertical.To date, hundreds of HAROP systems have been sold to different customers, for an accumulated amount of hundreds of millions of dollars, IAI added.Commenting on the latest HAROP flights, Boaz Levi, IAI corporate vice president and general manager of the Systems, Missiles & Space Group said, “There is no doubt that HAROP gives its users significant operational advantages. We consider HAROP as a leading system with considerable sales potential.”Assaf Shechter, director of IAI’s loitering missile programs, added that in the recent experiments, IAI tested improved target detection and destruction capabilities.He added that the HAROP has accumulated thousands of test flight hours.