Eisenkot made the comments at the annual Chief of Staff award for outstanding IDF units.

By ANNA AHRONHEIM
DECEMBER 26, 2017 17:05
Israeli forces are seen near a border fence between the Israeli side of the Golan Heights and Syria, November 4, 2017.
(photo credit: REUTERS)
Advertisement
Israel is surrounded by dangerous enemies that require the military to act judiciously and creatively, Chief of Staff Lt.- Gen. Gadi Eisenkot said.“The IDF is clearly superior to its enemies, but we are aware of the real danger of proliferation on several fronts which are explosive and require us to act judiciously, creatively, to initiate and to dare,” Eisenkot said during the annual Chief of Staff Award ceremony honoring outstanding units at the Kirya military headquarters in Tel Aviv on Monday night. 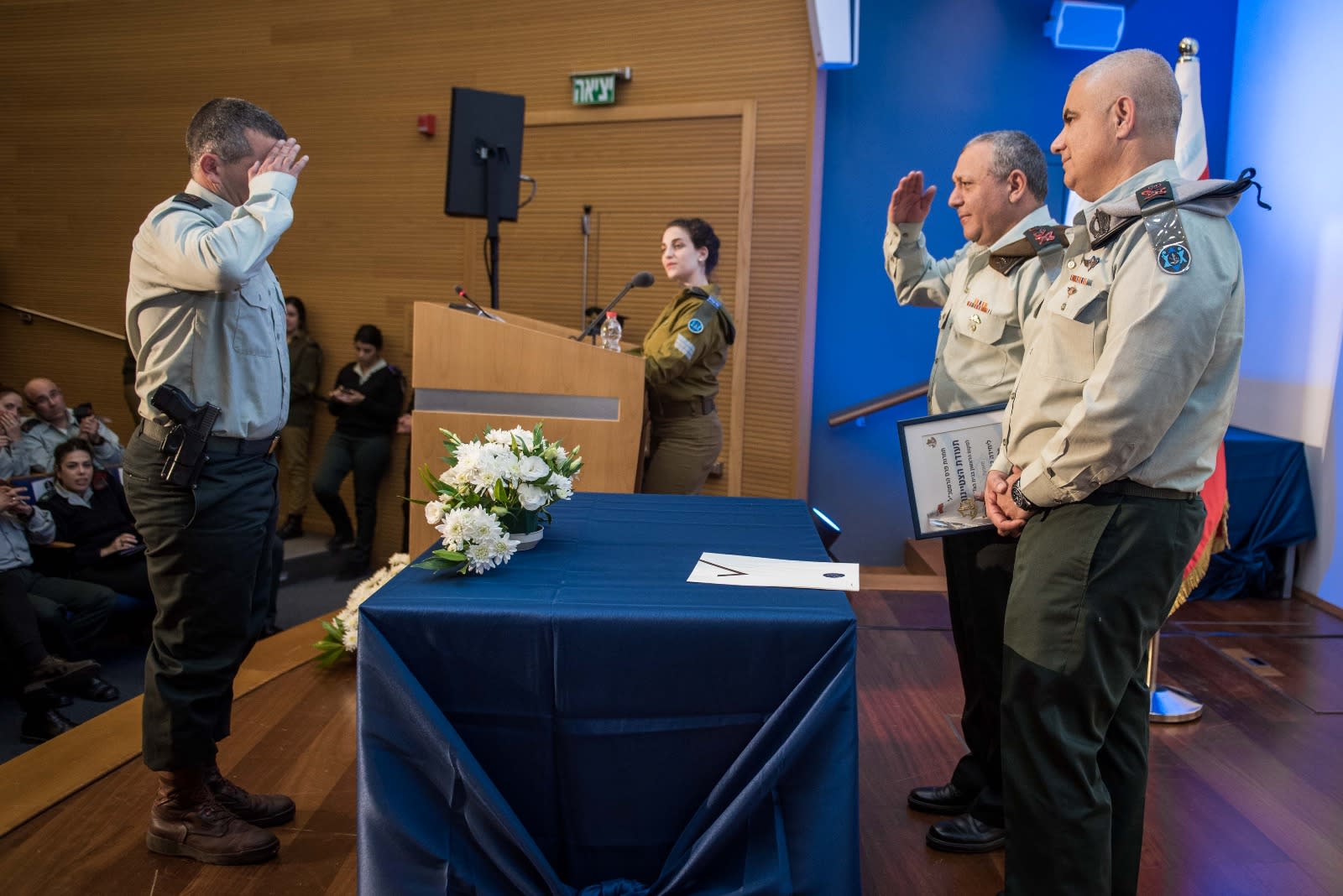 IDF Chief of Staff Gadi Eisenkot speaks at the annual awards for outstanding IDF units. (IDF SPOKESPERSON'S UNIT)Eisenkot was addressing commanders and soldiers at the ceremony, in which certificates of excellence were awarded to outstanding troops in regular and territorial brigades, battalions, reserve units, training units, combat support units and technology units.“You know more than anybody that we are in the midst of a complex security period in which you are required to take command and have a clear impact on the operational results,” he continued. “This evening is the most tangible expression of the operational and human strength of the Israel Defense Forces today.“All of you together contribute to the moral and operational strength of the IDF and serve as an important element in the IDF’s ability to realize its mission while maintaining its character as a professional and responsible army whose role is to safeguard the security of the State of Israel,” the chief of staff continued.
US President Donald Trump recognizes Jerusalem as Israel"s capital and announces embassy to relocate
“I trust you that at this time you will serve as an example of professional and responsible action, that we will continue to maintain a good security reality over time, and if we are required to use the power of the IDF, we will use our full strength and defeat every enemy.”The IDF has been kept on high alert along the borders, with an increasingly dire humanitarian situation in the Gaza Strip and the ongoing wave of violence in the West Bank and Jerusalem.Following the US recognition on December 6 of Jerusalem as Israel’s capital, dozens of rockets were fired from the Hamas-run enclave and thousands of Palestinians took to the streets, with some attacking IDF troops, leaving several Palestinians dead.In the south, Islamic State’s Sinai affiliate is believed to be the jihadist group’s strongest branch. Israeli intelligence officials have warned that ISIS fighters from Iraq and Syria might join the branch in the restive Sinai Peninsula which, despite consisting of fewer than 1,000 operatives, has been responsible for numerous deadly attacks, mostly against Egyptian security personnel and civilians.The war in Syria has also been a focus of Eisenkot’s, especially in terms of keeping advanced Iranian weapons from the hands of Hezbollah. Speaking to the London-based, Saudi- owned online newspaper Elaph in a rare interview in November, Eisenkot warned of the expansion of Iranian influence across the Middle East as a major concern to Israel and to the Sunni kingdom.“The Iranian plan is to control the Middle East by means of two Shi’ite crescents,” he told Elaph. “The first being from Iran through Iraq to Syria and Lebanon, and the second across the Gulf from Bahrain to Yemen to the Red Sea. We must stop that from happening.”During his two years as chief of staff, Eisenkot has focused on preparing Israel and its military for a sudden outbreak of conflict on the borders, and has restocked the IDF’s arsenal and increased training for reserve soldiers from five days a year to two weeks.In March, during one of the army’s largest planned drills where 2,000 reserve soldiers were called up to simulate war in the Gaza Strip, Eisenkot said: “We have put preparedness at the top of the IDF’s list of priorities. This is evident from the increased training program.”