"If they can be the ambassadors in haredi society and say that its worthwhile and that the army is accommodating then this will increase the draft [from the haredi community]." 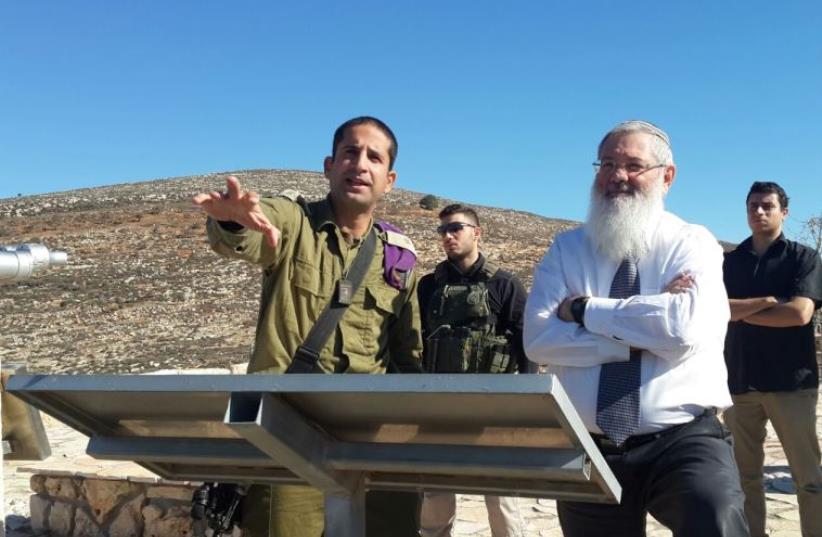 Deputy Defense Minister and Bayit Yehudi MK Eli Ben-Dahan visiting the Givati Brigade's Tomer Company in the Shomron
(photo credit: OFFICE OF DEPUTY MINISTER ELI BEN-DAHAN)
Advertisement
Deputy Defense Minister Eli Ben-Dahan (Bayit Yehudi) said on Thursday that success in making the haredi Tomer Company a part of the Givati Brigade has led the IDF to consider integrating more ultra-Orthodox troops into regular battalions.“Tomer is a very impressive company, it’s very professional, it’s carrying out arrests of terrorists, performing important operations which the army requires, and the IDF is trusting and relying on this company,” Ben-Dahan told The Jerusalem Post in an interview.“The battalion commander is very satisfied with them,” Ben-Dahan added, in remarks after a recent visit to the Samaria region where the unit is on active combat duty.“They learn quickly, they are ready for battle, and they have a lot of motivation,” Ben-Dahan said.He said “the IDF is examining the possibility of making other haredi companies a part of regular battalions” such as the Golani and Paratroop brigades.“Such a decision has not yet been taken however, but there are IDF commanders who are recommending it,” Ben-Dahan said.Speaking more broadly about haredi conscription, Ben-Dahan said he believed enlistment figures in 2015 would meet targets set by the last government.“In general it looks okay, definitely okay. They will be a little higher than in 2014.”The increase in haredi enlistment in 2013 and 2014 over previously has been 28 percent and 22%, respectively.The deputy minister dismissed claims that haredi recruits came only from the margins of their community.“It is true that those who are most open to enlistment are not those attending yeshiva, but we are also seeing yeshiva students who after two, three, or four years of study become interested in enlisting. It’s beginning to enter the mainstream as well.”Ben-Dahan said a recent amendment passed by the Knesset, dropping a previous 2017 deadline for obligatory haredi enlistment, was already showing signs of generating a better attitude in their communities towards enlistment.“This new atmosphere helps boys who are in doubt, they need this encouragement, so when they see their politicians and rabbis not coming out against this law, that there are no demonstrations, then it makes it easier for these boys to decide,” Ben-Dahan said.Tomer, a company of approximately 250 haredi soldiers, was launched in August 2014 at the urging of then Givati commander Brig.-Gen. Ofer Winter.The company is unique in that before its existence, the only other IDF track for haredi combat soldiers had been the Netzah Yehuda Battalion of the Kfir Brigade.Tomer however is a haredi company integrated within a larger regular IDF battalion, the Rotem Battalion of Givati.About 100 of the soldiers from Tomer are on operational duty in Samaria. The rest, including 60 new recruits, are still in basic training.The company started its combat operations on the Golan close to the Druse village of Majdal Shams and the Syrian border. Last spring it won some public recognition for its role in spotting guerrillas from Syria planting an improvised explosive device at the border, who were subsequently killed in an air strike.Ben-Dahan said that overall, “I see that in the field, soldiers are integrating, commanders are satisfied with them, the soldiers themselves are feeling that they are contributing and that the army is helping them, and this changes the atmosphere, they can encourage their friends to enlist.“If they can be the ambassadors in haredi society and say that its worthwhile and that the army is accommodating, then this will increase the draft [from the haredi community]. I see in this a great hope and I think there’s a good chance they will recommend this path to their friends,” he said.Approximately 5,000 haredi soldiers serve in the IDF, including 1,200 in combat roles, while the remainder are in tracks like the IDF’s Shahar program, which places these soldiers in prestigious units in the Intelligence, Navy, Air Force and Computer Service Directorate services.