Incident comes at a time of heightened security in West Bank. 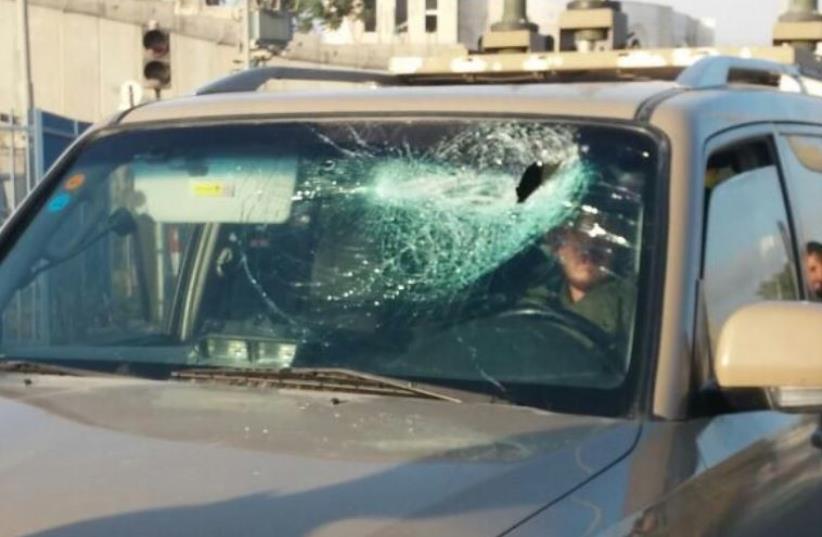 Smashed windshield of IDF vehicle
(photo credit: IDF SPOKESMAN’S UNIT)
Advertisement
The commander of the Judea and Samaria Division’s Binyamin Brigade shot and killed a Palestinian attacker on Friday morning, the IDF confirmed.Palestinians began throwing stones at Col. Israel Shomer’s vehicle and in response, after firing warning shots he opened fire and killed one of them.The victim was identified as a Muhammad al-Casba, 17.The incident took place near a-Ram, which is adjacent to Ramallah, at a time of a heightened security level in the West Bank following a spate of terrorist attacks against Israeli targets.The commander was on his way to the Kalandiya checkpoint between Jerusalem and Ramallah when he was attacked.No IDF personnel were wounded; the vehicle’s windshield was smashed.“The commander reacted exactly as expected given that the incident presented an immediate risk to life,” an IDF source said on Friday.The attack on the commander’s vehicle had been planned in advance, the source said.Large forces were sent to the area following the shooting as the IDF believed that disturbances to public order would come in its wake.Responding to the incident, Education Minister Naftali Bennett said he backed the commander’s decision completely.“If someone seeks to kill you, rise up and kill him,” Bennett wrote on Twitter, in a quote from Jewish sources. “I back completely the Binyamin Brigade Commander who acted against a terrorist in order to defend his soldiers.”“Stones kill, just ask Adele Biton,” Bennett added, referring to the toddler who was seriously injured in a stone-throwing terror attack in 2013.Biton died of pneumonia in February, and at the time her mother claimed that the severity of the illness was a direct result of the wounds she suffered in the terrorist attack.Yesh Atid leader Yair Lapid also expressed his support for the IDF commander.“Stones kill, and IDF soldiers need to be able to defend themselves and know that their political leaders will back them up completely,” Lapid said at a conference in Kfar Saba.Last month, Justice Minister Ayelet Shaked announced that she would be aggressively pushing forward with legislation to increase the penalties for persons throwing stones.If passed by the Knesset, the bill would increase the maximum penalty for people who throw stones at vehicles to 10 or 20 years in prison, depending on the circumstances, and increase the chances of conviction.