Security services gear up for expected clashes in Jerusalem and the West Bank on Friday amid expectations a large number of Muslim worshipers will try to make their way to the Temple Mount. 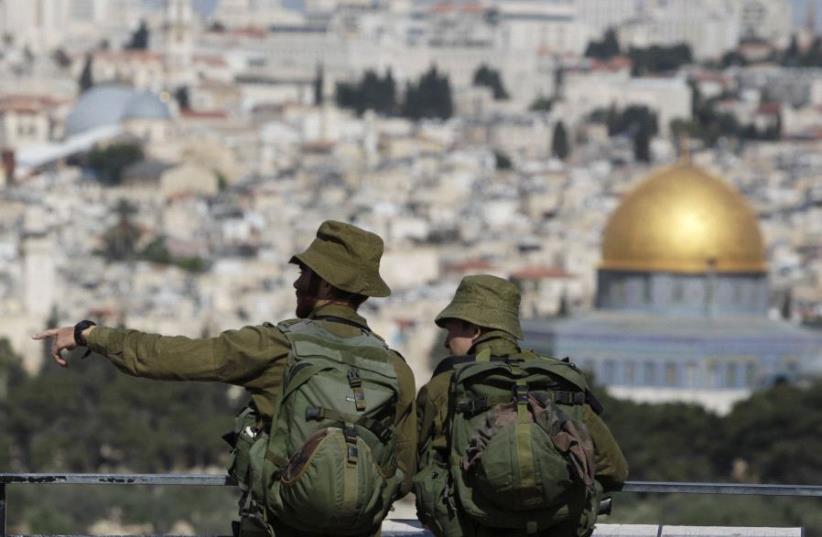 IDF soldiers stand at a lookout point on the Mount of Olives, overlooking the Dome of the Rock in Jerusalem's Old City
(photo credit: REUTERS)
Advertisement
With tensions high on and around the Temple Mount following last week’s terrorist attack, the army has placed five extra battalions on alert in the West Bank ahead of Friday prayers.Police will also continue to secure the area along with the reinforcement of thousands of special police forces.Should the situation change, the battalions may be released, the IDF said on Thursday.The announcement that thousands of extra troops are being placed on call comes as security services gear up for expected clashes in Jerusalem and the West Bank on Friday amid expectations a large number of Muslim worshipers will try to make their way to the Temple Mount.On Thursday afternoon, a Palestinian man was shot and killed by Israeli troops in the West Bank village of Tuqu near the settlement of Tekoa after he attempted to stab soldiers at a checkpoint.No troops were hurt.Last week’s terrorist attack on the Temple Mount left two police officers dead and resulted in the government placing metal detectors at the entrances to the site.Clashes broke out in the West Bank on Wednesday after Fatah announced a “day of rage,” encouraging Palestinians to demonstrate against the metal detectors.Palestinian Red Crescent reported three injuries from live fire near Kalandiya after dozens of youths who were marching toward the checkpoint near Ramallah began to throw stones at Israeli forces.Israel claims the detectors are necessary to prevent further attacks, but worshipers and Arab states have condemned the move, claiming it constitutes a change in the status quo.Under the status quo, Israel controls access to and security at the site, and Jordan – through the Wakf Islamic trust – administers activities inside the compound.According to former Shin Bet head MK Yaakov Perry (Yesh Atid), while the “situation is very fragile and sensitive,” the placing of metal detectors does not constitute a change in the status quo.“Every holy, sensitive place in the world is protected,” he said, adding that “there is no hermetic proof – not for intelligence and not for physical security means – but, after this terrorist act, I think the conclusion to tighten the security belt and add these electronic gates was not a political decision but purely a security one.”