The High Court of Justice is adjudicating the legality of the Settlements Law after receiving petitions against it from NGOs including Peace Now and B’Tselem. 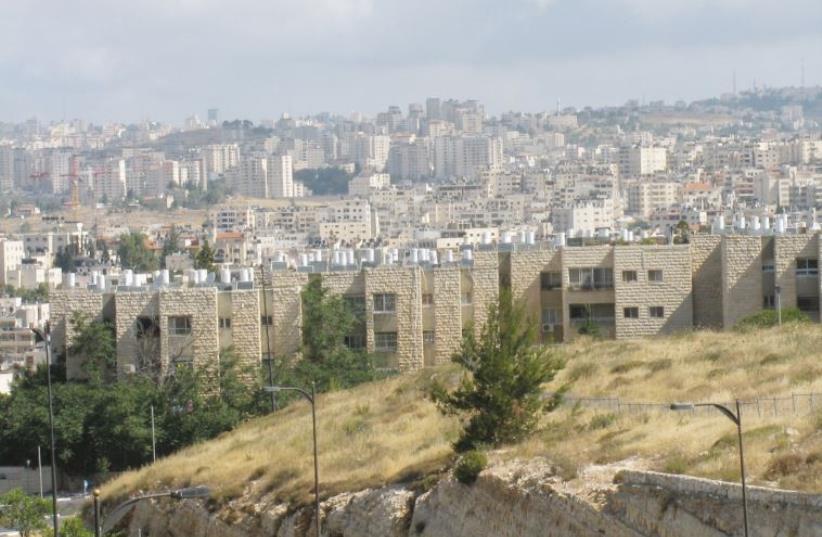 The Jewish neighborhood of Neveh Ya’acov with the settlement of Psagot in the background
(photo credit: ANAV SILVERMAN)
Advertisement
The Civil Administration confirmed Monday that it had rescinded demolition orders against four settler structures on private Palestinian property in the Psagot settlement.The orders were issued after the Knesset, in February, approved the Settlements Law, which was designed to retroactively legalize some 4,000 homes in West Bank settlements in exchange for compensating the Palestinian land owners. The right-wing nongovernmental organization Regavim petitioned the Civil Administration against the orders, explaining that the new legislation nullified the need for enforcement action and that two of the structures were homes, one was a storage unit and the fourth an agricultural building.Last week, the Civil Administration told Regavim it had canceled the orders and closed the cases involving the homes. It’s the first time the Civil Administration has rescinded a demolition order based on the new law.According to Army Radio, which first broke the story, the Civil Administration also had issued orders against five homes in Modi’in Illit and two in Kochav Ya’acov, but no decision has been made regarding those homes.Its presumed that, at this point, the Civil Administration will examine legal issues against the homes on a case-to-case basis.The future of the legislation is also unclear.The High Court of Justice is adjudicating the legality of the Settlements Law after receiving petitions against it from NGOs including Peace Now and B’Tselem.The High Court of Justice has the power to strike the law, which Attorney- General Avichai Mandelblit has already stated is unconstitutional. In this case, the state will be represented by a private attorney.In response to the petition, which involves 13 NGOs, the state had told the High Court of Justice on March 12 that “enforcement against existing constructions in Judea and Samaria have been stopped.”The Civil Administration added that the warrants in the case of Psagot were “served before preparations were completed to implement this announcement and, therefore, were rescinded.”According to the Settlements Law, the Civil Administration is suppose to suspend for one year enforcement action against 16 Jewish communities in Judea and Samaria including Psagot, Modi’in Illit and Kochav Ya’acov.