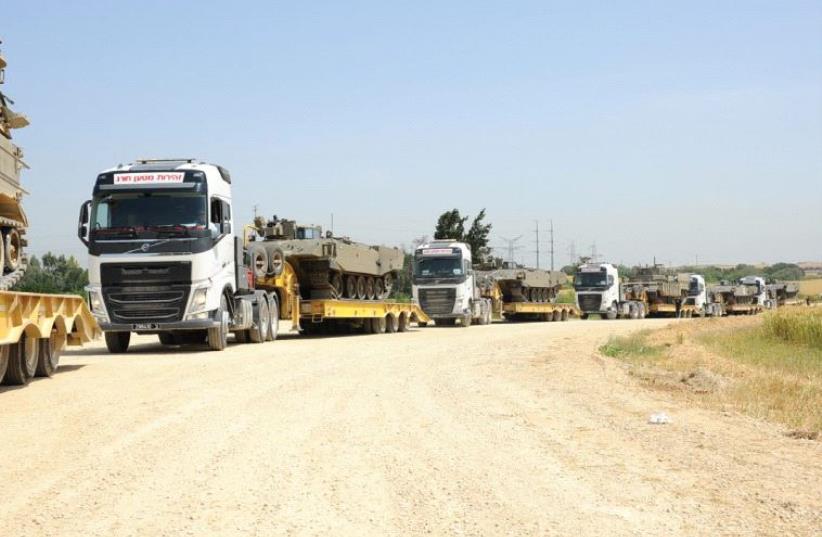 IDF TRANSPORT CENTER’S newly acquired Volvo 600 tank transporters are seen in action on a gravel road.
(photo credit: IDF SPOKESMAN’S UNIT)
Advertisement
The IDF Transport Center, responsible for the critical task of delivering tanks, armored personnel carriers, ammunition, gas, water and food to military units around the country, is preparing for the scenario of a multi-front conflict, in which it would need to mass deploy supplies to north and south, under heavy enemy fire.Brig.-Gen. Josef Shamir, head of the Operations Department, described the Transport Center as “the biggest moving company in the Middle East,” telling The Jerusalem Post this week that it functions much like blood vessels do in the body, getting oxygen to every cell.“We deliver functionality to every IDF unit; no outpost or unit will not have one of my soldiers there, enabling it to function,” he said.In the event of a full-scale conflict involving ground offensives, the Center would need to reach units on fronts before they begin their maneuvers on the battlefield, and it would potentially need to do so in the North and South at the same time.This would entail flooding Israel’s highways with convoys of armored vehicles, as well as getting ordinance to airbases around the country.The Transport Center’s main headquarters commands over four brigades, each with their own battalion, and in an effort to modernize and deliver supplies more efficiently, it has adopted new technologies, while also mimicking practices of private sector firms, like car rental companies.“In the future, our operations will be different from what we’ve done in the past. We have reorganized ourselves significantly,” Shamir said.He added that the Center held a large-scale drill on Route 6 last week – the largest exercise of its kind to date – practicing its ability to get military platforms to fronts under pressure.The Center has recently acquired new Volvo 600 tank transporters, placed GPS trackers on each of them, and set up regional command and control centers to track their movements in real time. The Transport Center has divided the country into northern, central, and southern regions, each with their own control centers, enabling more efficient command and control on the country’s roads, Shamir said.Should the IDF “reach a situation in which we must use the full order of battle in our possession, we will know the location of each of our vehicles, and their mission status,” he stated.The new regional control centers also analyze terrain, where transporters must move, and has created direct communication channels between drivers and their closest controllers.Until recently, the Transport Center did not have such “organized control,” and had to rely on an inefficient communication system, in which drivers spoke to commanders, who passed data up the chain of command, until it eventually reached its address.“Now, our battalion commander has a command room, and gets a situation picture at any time,” said Shamir.A failure to correctly prepare for supply journeys could create traffic jams that would shut down national highways, during the worst possible time, when hundreds of thousands of civilians might be using the same roads to flee conflict zones. Lengthy breakdowns would also mean that armored vehicles or ammunitions vital for the war effort would face significant delays in reaching their destination, when such waits could harm the IDF’s fighting ability.This fact that has led Brig.- Gen. Dror Nozitza, who heads the Maintenance Department at the Transport Center, to copy the techniques of car rental companies and cut down the time it takes for broken down transporters to receive roadside assistance. He said the changes reduced waiting times dramatically, from an average of seven to 12 hours to 47 minutes.“We learned how to provide a better service from the civilian world, and how to reach locations faster,” he said. Tank transporters now have a windshield sticker with a phone number that links drivers directly to an IDF hot line center, where operators are on standby to dispatch army mechanics. The mechanics themselves would be on the roads to begin with, traveling within the northern, central and southern sectors.“We mobilize our maintenance units; now they’re on the roads. All a driver has to do is call the number on his sticker,” said Nozitza. “The maintenance crews will be within 50 kilometers. The decrease in waiting time is dramatic. Imagine how a driver feels after he calls for help, and crews arrive quickly,” Nozitza said.The company that runs Route 6 – frequently used by the IDF to mobilize heavy armor – will also share live video feeds with the IDF in case of a breakdown, and a computerized tracking system will use GPS data to enable controllers to see which maintenance unit is closest to the breakdown site.“We designed these changes for the worst case scenario,” Nozitza said. “The maintenance crews are on the roads before the transporters are. If a transport is scheduled for 8 a.m., moving forces from the North to Gaza, for example, at 6 a.m. a maintenance force will already be moving back and forth, with water, supplies and replacement parts,” he added.Looking ahead, Nozitza said that next year, the Maintenance Department will know of technical problems developing on the transporters before drivers do, since the Volvo 600 has 14 computers on board, which can report on all faults and broadcast them.“Next year, I’ll be able to reach a vehicle and stop it because of computer reports the driver will not even know about,” he said.