In the photo, one of the victims of Tuesday’s bombing can be seen lying naked from the waist down on a hospital bed, suffering from extreme injuries to his legs. 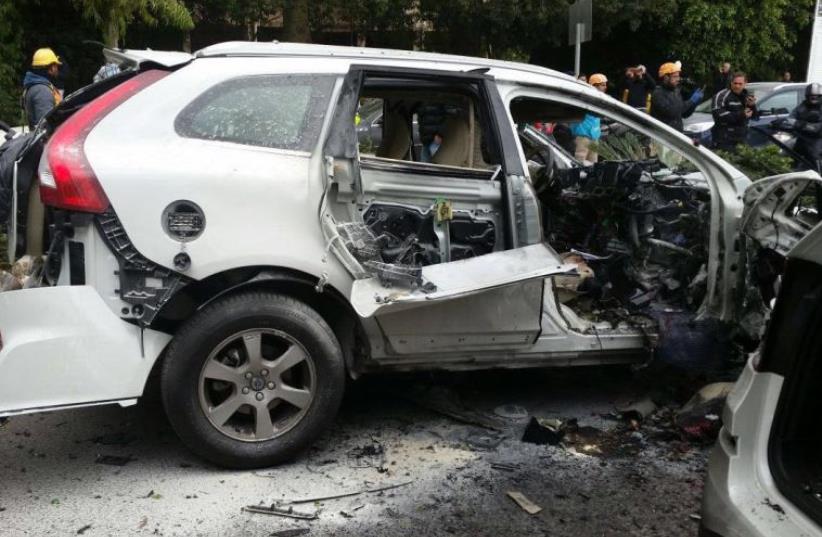 Scene of suspected criminal assassination in Tel Aviv area
(photo credit: ISRAEL POLICE)
Advertisement
A graphic image of the victim of an underworld bombing in Tel Aviv went viral on Israeli social media on Tuesday, prompting Ichilov Hospital, where the picture of the mutilated victim was taken, to file a complaint with the police.In the photo, one of the victims of Tuesday’s bombing can be seen lying naked from the waist down on a hospital bed, with extreme injuries to his legs.One of his feet is blown completely off and the other is mangled beyond recognition.It is not clear whether the victim is underworld figure Ben Cohen – the apparent target of the explosion – or one of his bodyguards, two of whom were wounded in the blast. In the photo three doctors can be seen from the neck down standing against a wall and facing the photographer.Ichilov spokesman Avi Shushan said the facility sees the incident as a grave violation of the privacy of the deceased and that, in addition to the police complaint, they have opened an internal inquiry to find out who took the picture and how it became public.Shushan said that as of Wednesday afternoon they had yet to determine whether the picture was taken in the trauma ward or on the operating table.Shushan said in the trauma ward there is much more foot-traffic, including paramedics and police and medical volunteers who could have taken the photo, as opposed to the operating room, which would typically only include medical personnel.This is not the first time that graphic photos of a crime victim have made their way to the public by way of social media.In August 2013, photos of the beheaded and dismembered body of 45-yearold Romanian citizen Ilona Denise went viral on WhatsApp in Israel, hours after most of her body was found stuffed in a suitcase in south Tel Aviv. The photos – taken at a closed crime scene – went viral while the case was still covered under a gag order, and would have had to have been taken by someone with access to the scene, such as medical or police personnel.The bomb on Tuesday was detonated while Ben Cohen and two bodyguards were driving on Shefa Tal Street between Tel Aviv and Givatayim. Both Cohen and a bodyguard were seriously wounded, and a second bodyguard was lightly hurt.Cohen is a well-known underworld figure who for years has been a force in the “gray market” world of loan sharking, and was for years a close associate of mob boss Amir Mulner.