In Jerusalem, an interfaith effort at addressing climate change

The leaders found common ground on the issues through their religions. 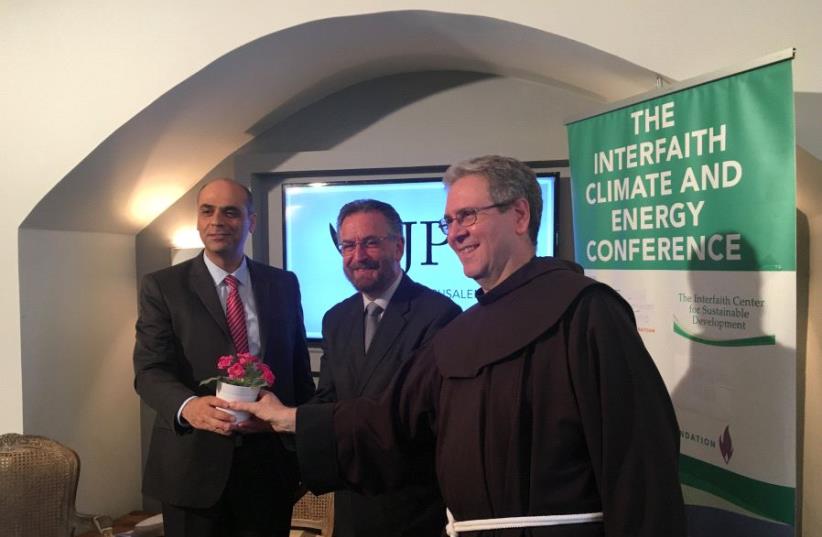 Interfaith leaders at a climate and energy conference
(photo credit: ISABEL FEINSTEIN)
Advertisement
A rabbi, a priest and a kadi came together on Wednesday to discuss an issue equally affecting us all: climate change.The event, which was organized by the Interfaith Center for Sustainable Development and hosted by the Jerusalem Press Club, focused on the role of religious leaders in increasing awareness of both climate change and the importance of the human obligation to take strides to preserve our shared planet.Rabbi David Rosen, the American Jewish Committee’s international director of interreligious affairs; Father Francesco Patton, the Franciscan order’s chief custodian of the Holy Land; and Kadi Iyad Zahalha, a judge on the Shari’a Court of Appeal in Israel, sent a strong message of unity to what Rosen called the “global village.”The three men, all esteemed figures within their faiths, cited a multitude of similarities among the Abrahamic religions that call their followers to prioritize the health of our earth.The Interfaith Center for Sustainable Development is an Israeli nonprofit organization that works to catalyze a transition to a sustainable, thriving and spiritually aware society through the leadership of faith communities. Based in Jerusalem, the center unites faith communities, teachers and leaders to promote coexistence, peace and sustainability through advocacy, education and action-oriented projects.Its founder and director, Rabbi Yonatan Neril, served as moderator for Wednesday’s event.Neril introduced the discussion by referencing current affairs, noting that the Jerusalem area has suffered violence almost every summer since the year 2000. Simultaneously, the region has experienced its most severe drought in 900 years, not to mention intense and prolonged heat. There is an undeniable correlation between rising temperatures and the incitement of violence, he said.“From a religious perspective, this isn’t a crisis of nature – this is a crisis of the human being,” said Neril.The panelists were each asked to share a teaching from their faiths that lends itself to the need to address climate change.“From the Christian perspective, we are thinking that we are part of all of creation, and so we have to take care of our common home. We have to take care of our brothers and sisters,” Patton said.Rosen, who is a vegan, cited an injunction from Deuteronomy: “Choose life in order that you and your children shall live.” He interpreted this Torah passage in a modern context: “Today, [climate change] is a matter of life and death...today, no one can live isolated from one another. We are all inextricably bound up with one another. If we are moral, ethical human beings, especially if we are people of faith, there is no option but to make it a major focus of our activity.”Zahalha said: “We have similar passages in the Koran. The Lord gave us this responsibility...the generations that come after us need resources to have life. I think we, as Muslims, should take part in saving and preserving nature.”The religious leaders acknowledge the changing human experience as our earth transforms, using personal narratives alongside their religious beliefs to corroborate their convictions.Patton, who grew up on a farm in northern Italy, recalled harvesting in September and October when he was a child.Now, the harvest is in August.“If it affects my region, it will affect other regions,” he said.Patton introduced a chilling idea about forced migration due to global warming. He cited Pope Francis, who said that “in our day, there are not only refugees because of war; there are refugees because of climate change.”Zahalha called for peace: “When we fight for the land, for money, for the will of the people, we forget the basics of our life, which is how to live for everyone.” He said the prophet Muhammad asked Muslims to call on all people of the holy books to do everything possible to improve our lives and create peace for everyone. “I think it’s not [just] something I can do; it’s something I must do, to open this dialogue,” Zahalha said.Rosen said: “The idea that anyone can go it alone is a ridiculous illusion. It should be obvious that we have to be greater than the sum of our different parts... no one tradition can encapsulate the totality of the divine. Any kind of interreligious engagement is a growth for the person who is genuinely engaged.”Patton said: “We are all human beings, in all of our traditions.We have received the gift of life; we have received the gift of creation. In this experience of human beings, we are not the creation – we are part of the creation.”