Frantzman is following unit 916 as its 12 man team goes about its monthly training exercise to stop potential threats. 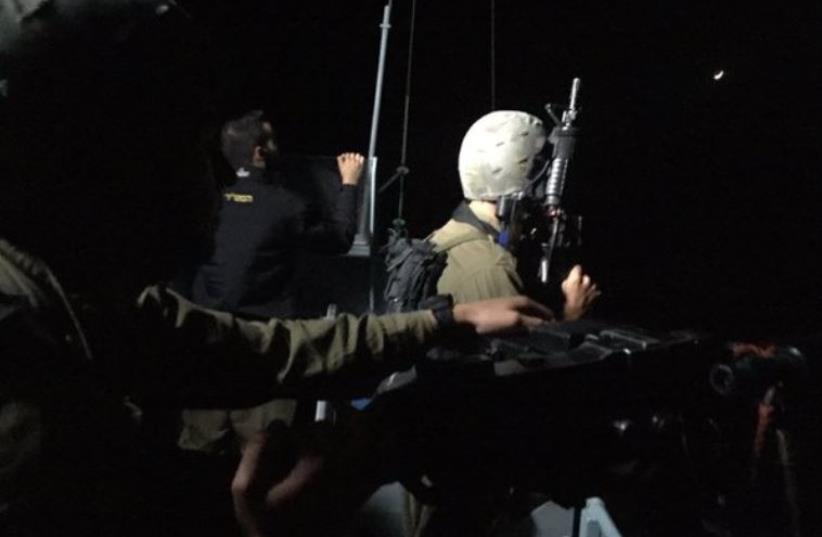 IDF conducting security exercise
(photo credit: SETH J. FRANTZMAN)
Advertisement
On Monday night Israel’s navy squadron 916, which is based at the port of Ashdod, conducted a monthly training exercise off the coast. The squadron of around a dozen fast patrol boats based in Ashdod are tasked with making sure that no threats emerge by sea from the Strip, interdicting fishermen who stray too far from the coast, and dealing with other threats that might emerge. The 12-man crew of the Israel Shipyards built-Shaldag boat often live aboard their ship for up to four days while on patrol.  The fast patrol boat is outfitted with numerous armaments. At the bow is a Rafael Typhoon .25 mm gun which can fire up to 1.5 kilometers. At the stern is a mounted .50 cal and two MAG machine guns mounted on the bridge.
(Photo by: Seth Frantzman)
Four Shaldag class fast patrol boats await orders before departure for a night training.The exercise Monday night began as the sun was setting.
(Photo by: Seth Frantzman) Captain Yossi Akrish and his crew take their boat to sea.  Akrish, who is twenty-four, has served in the squadron for one and a half years. 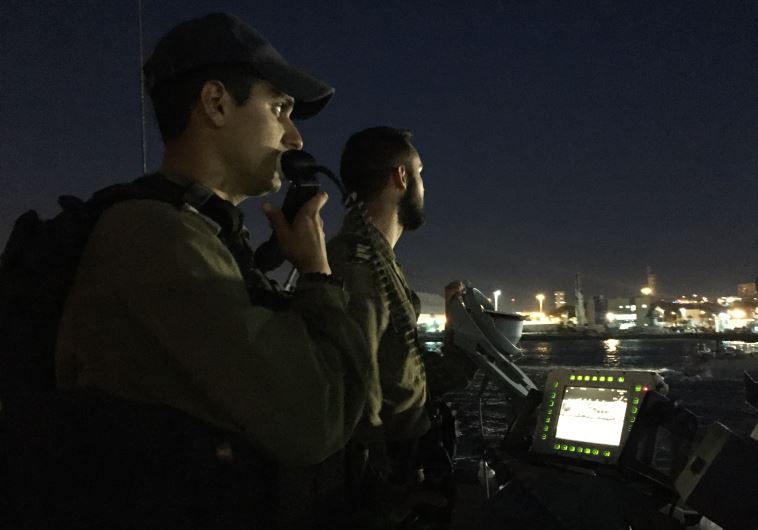 (Picture taken by: Seth Frantzmen)As night falls the crew prepares for its training mission and is briefed on tonight’s exercise which will consist of stopping a suspicious boat and then a live-fire practice shooting at a target at sea. 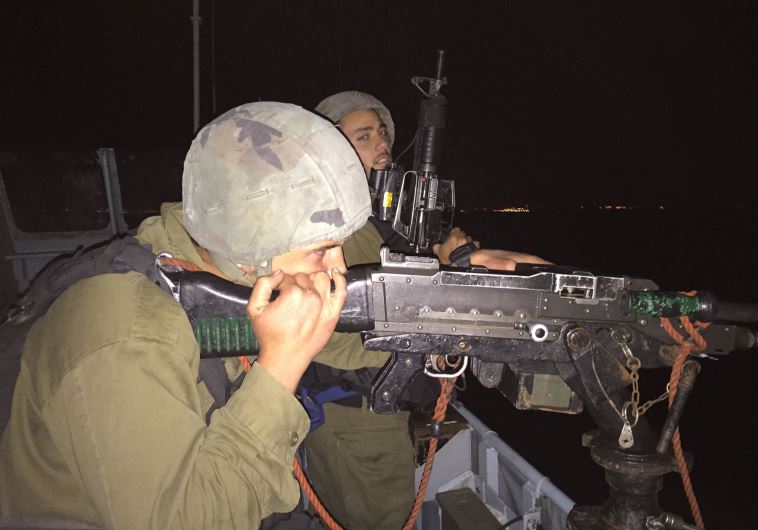 (Photo by: Seth Frantzman)
The 12 man crew describe themselves as “warriors first” who also have expertise in other aspects of the ship, such as mechanics.  Two of the men here put on combat protective gear and stand at their stations on the bridge as they would when monitoring a potential threat.
Most of the time patrolling off Gaza is spent monitoring a security zone of 6-9 miles off the coast.  Gaza –based fishermen are permitted to fish inside that range. The Gaza fishing fleet is visible in the distance as five specks of light.  The Gazans are fishing at night using bright light to attract plankton which will then attract fish to feed. Akrish says he stresses to his crew the importance of having patience and empathy for the fishermen. 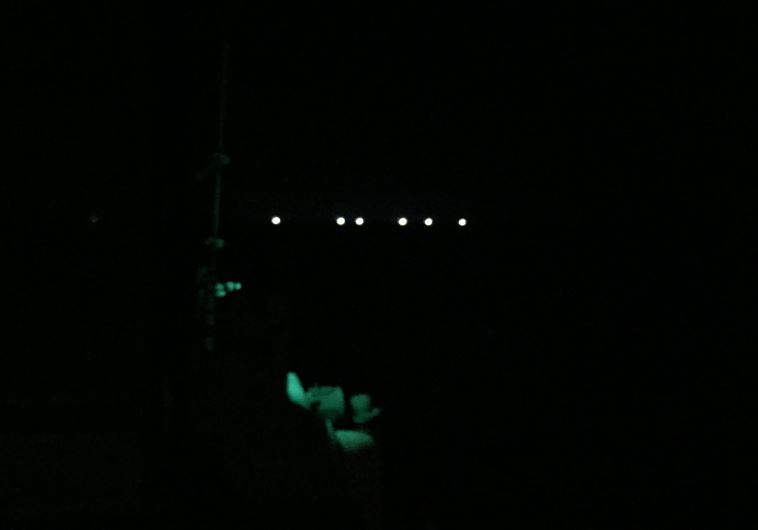 One of the crew members is Druze from the Galilee named Amer Amir, the only native-Arabic speaker on this boat.  During the training he speaks via a loudspeaker with the ‘suspicious’ vessel.

The patrol training for intercepting a suspicious boat that has strayed beyond the permitted fishing zone.  They practice using loudspeakers to demand the boat stop and then disabling the boat’s engine.  One of the crew man’s a spotlight.
After successfully stopping the suspicious boat, the patrol heads out to sea.  The Shaldag class can do up to 45 knots, and in winter with higher waves the men say they get drenched with water.  Tonight it’s relatively calm.  The men suit up with helmets and flak jackets to practice shooting at a target at sea. 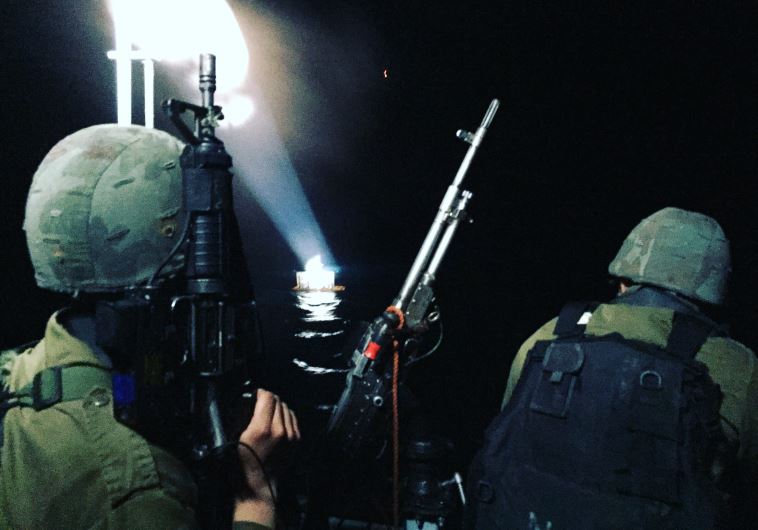 (Photo by: Seth Frantzman)
With the completion of the tonight’s training the men prepare to return to base.  “It’s like a family here,” say the crew. 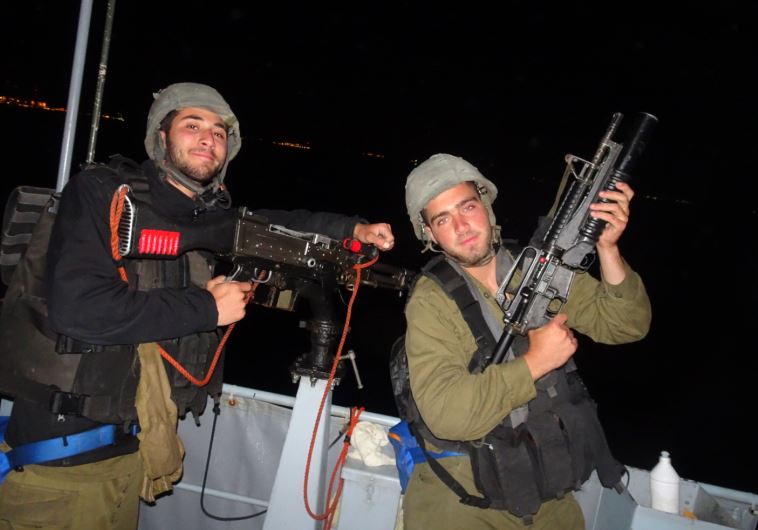 (Photo by: Seth Frantzman)Two crew members are cooking dinner below in the living quarters as the ship rocks back and forth. 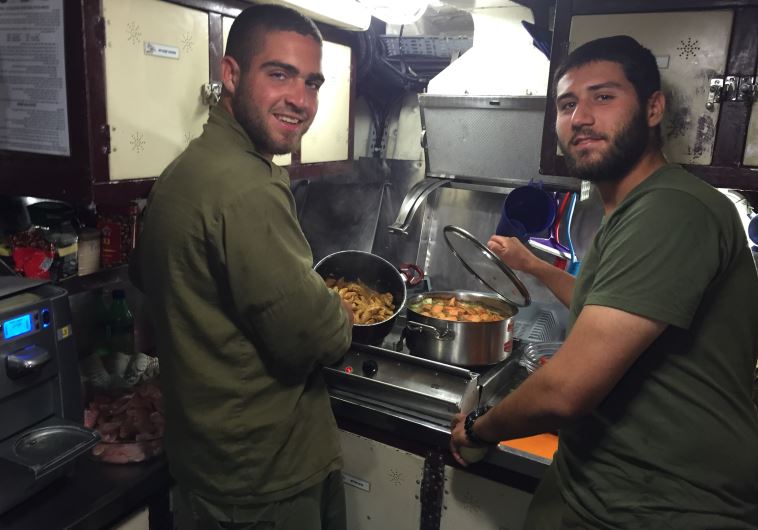 (Photo by: Seth Frantzman) It’s cramped quarters below deck.  Sleeping area for 10 men has very limited space.  When at sea they sleep in shifts. 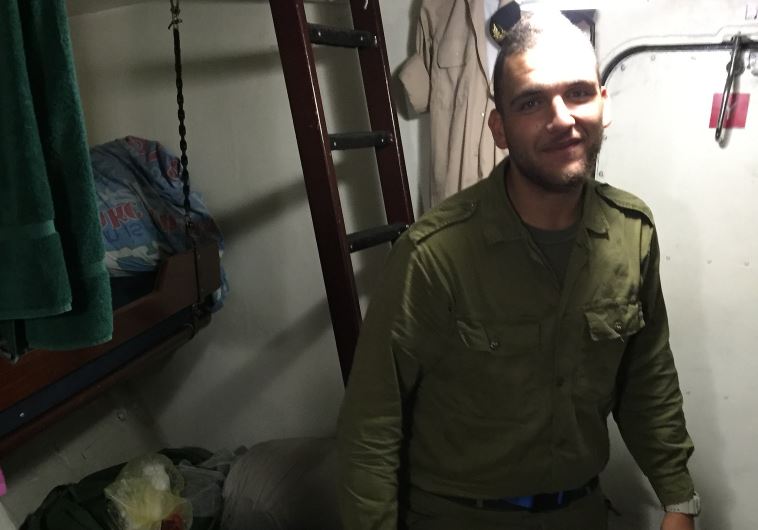