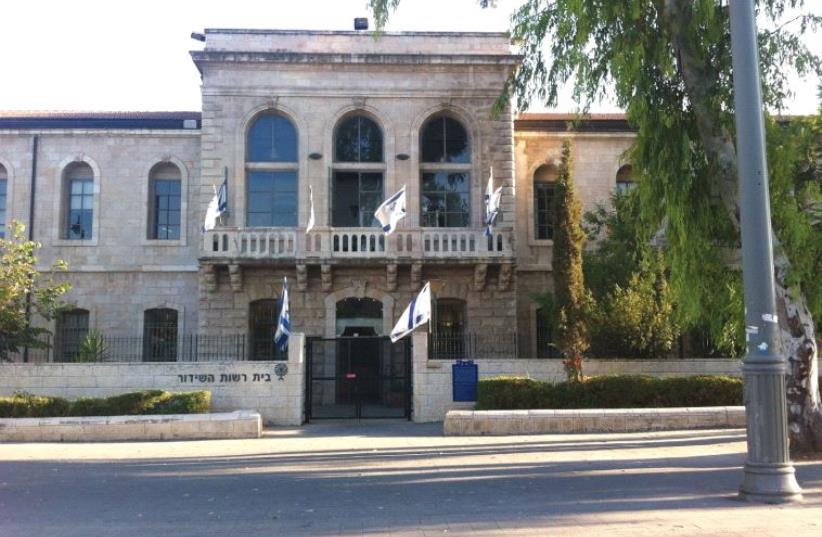 THE ISRAEL BROADCASTING AUTHORITY headquarters in Jerusalem are located in the historic former Shaare Zedek hospital building on Jaffa Road.
(photo credit: SARAH LEVI)
Advertisement
Ignoring or perhaps in spite of the political crisis between Prime Minister Benjamin Netanyahu and Finance Minister Moshe Kahlon, Kan, the communications branch of the Israel Broadcasting Corporation, went ahead and hired additional staff from the Israel Broadcasting Authority on Thursday.Listed as making the transition were Amir Ivgi, a Channel 1 news editor and presenter, as well as a Reshet Bet radio broadcaster; Ofer Nachshon, who has been presenting musical programs on Israel Radio for the past 25 years; and Leon Feldman, a music presenter on radio.Yuval Ganor, a former Reshet Bet broadcaster who heads the new Reshet Gimel station, said that he was very pleased to have Nachshon and Feldman on board, and described Nachshon as a great star.For Ivgi, who came to the IBA almost a decade ago, and, according to reports in the Hebrew media, was badly treated by both television and radio workers, his appointment as a presenter and the chief reader of news bulletins is a balm to the soul.Before coming to the Israel Broadcasting Authority he was a presenter of local news from the South for Hot cable. When he auditioned to be a Mabat news reader at Channel 1, he encountered instant hostility from other employees.After Yaron Dekel left Israel Radio to become head of Army Radio, various IBA broadcasters working in both television and radio were rotated to see which would be suitable as a permanent anchor for the long-running, immensely popular It’s all Talk.Among these broadcasters were Yossi Hadar, Ayala Hasson, who was a much admired investigative journalist who has transferred to Channel 10, Oren Nahari, an expert on foreign news who now works for Walla, and Noa Barak.When Ivgi was brought in to replace Barak, daggers were drawn at Israel Radio. The hostility was even greater than that which he had experienced at Chanel 1.People ostracized Ivgi and refused to cooperate with him, saying that he hadn’t been at the IBA long enough to be plucked out of television and given a plum program on radio.Eventually, he became accepted on both television and radio, but he went through a tough time which he prefers to forget, saying that the Israel Broadcasting Authority had been a warm, professional home for him.“Public broadcasting is dear to my heart and I am happy to have the privilege to be part of that in the Kan news program.” Ivgi thanked Baruch Shai, the head of the Kan news division, for “having confidence in him.”