More than 100 leaders from the Conference of Presidents of Major American Jewish Organizations’ 53 member organizations visited the museum. 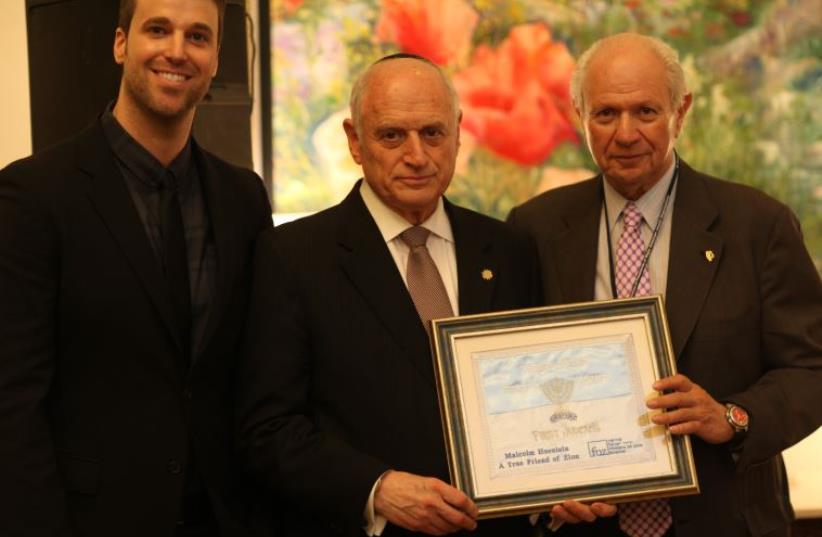 Michael Evan Jr. presenting John Patterson Award to Executive Vice Chair of the Conference of Presidents of Major American Jewish Organizations Malcolm Hoenlein.
(photo credit: Courtesy)
Advertisement
The Friends of Zion Museum in Jerusalem hosted two major international delegations at its Jerusalem campus last week, including senior Jewish leaders from North America and a group of diplomats and serving ambassadors.More than 100 leaders from the Conference of Presidents of Major American Jewish Organizations’ 53 member organizations visited the museum, which is dedicated to telling the story of non- Jews who lent their help and support to the Jewish people and the establishment of the State of Israel over the past 200 years.Malcolm Hoenlein, executive vice chairman of the Conference of Presidents, was awarded the John Patterson Leadership Award, an exact replica of the flag of the Jewish Legion, which was a unit of five battalions of Jewish volunteers created within the British Army to fight the Ottoman Empire during World War I.The Jewish Legion was commanded by Lt.-Col. John Henry Patterson, a Christian Zionist whom Prime Minister Benjamin Netanyahu termed the godfather of Israel’s army, because of his command of the Jewish Legion, which served with distinction in the Gallipoli and Palestine campaigns of WWI.In attendance were representatives of the diplomatic community from 26 countries ranging from Canada to Japan to Uruguay and the many countries in between.Among the depictions are the museum are the contributions of friends of Israel such as former US president Harry Truman; former British prime minister Winston Churchill; Prof. George Bush (a relative of former US president George W. Bush); Britain’s Orde Wingate; and Righteous Gentiles such as Oskar Schindler, Raoul Wallenberg and the ten Boom family, who risked their lives and the lives of their families to save Jews persecuted throughout the world.