ISIS reportedly responsible for rockets fired from Egypt into Eilat 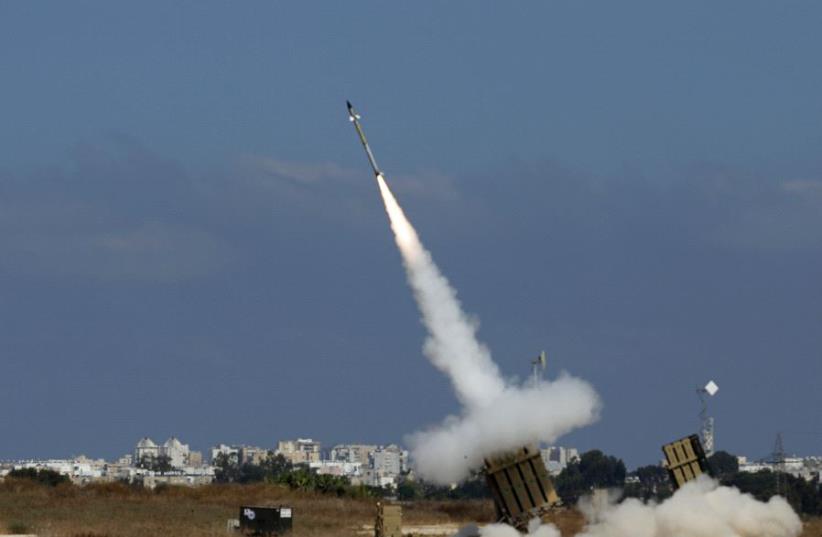 Iron Dome
(photo credit: REUTERS)
Advertisement
A branch of Islamic State in Egypt's Sinai reportedly claimed responsibility for firing rockets from Egypt into Israel on Wednesday night.According to reports in Gazan media early Thursday, the Sinai branch of Islamic State was responsible for a barrage of missiles at Eilat, on Israel's southernmost city.In a message published to the media, ISIS proudly stated they there were indeed responsible for the fire that was directed at southern Israel late on Wednesday, boasting of their intentions to commit further attacks. "With the grace of God alone, a military squad fired several Grad rockets at encampments of Jewish usurpers in the city of Um al-Rashrash [Eilat] in order to teach the Jews and the crusaders that a proxy war will not avail them of anything." Threatening to proceed with the aggression, the message went on to say that "the future will be more calamitous with Allah's permission."
ISIS video threatens Israel in January 2016
During the incident, four projectiles were fired into southern Israel and three were intercepted by the Iron Dome missile defense system, according to the IDF Southern Command.


The rocket that was not intercepted struck in open territory near the city.


Gazan media said the terror group fired seven rockets altogether.No injuries or damage were reported. A total of 11 people were treated for shock in Eilat's Joseftal Hospital. One was an Australian tourist, four were vacationers and the rest were local residents.As of Thursday morning, Eilat's threat level was lowered and police said that the city will operate as normal.The Iron Dome has not intercepted rockets headed for Eilat since 2014, when it did so during the most recent war with Hamas in the Gaza Strip, Operation Protective Edge.Eilat police reported that none of the rockets fell within city limits and requested residents to immediately report all suspicious events and/or objects found. The incident came hours after a mortar reportedly fell in the Golan Heights near the Syria border fence. There were no known causalities or damage. The IDF reported that the mortar was spillover from fighting within Syria, and that in response, the IDF struck a target in the northern Syrian Golan and confirmed a hit.Such spillover is not unusual, and the IDF has usually responded, even if it was expected to be accidental, with attacks against Syrian Army positions.Anna Ahronheim contributed to this report.