"There is palpably renewed energy in our relationship, I mean that figuratively and literally," says Prime Minister Benjamin Netanyahu alongside the president of Cyprus. 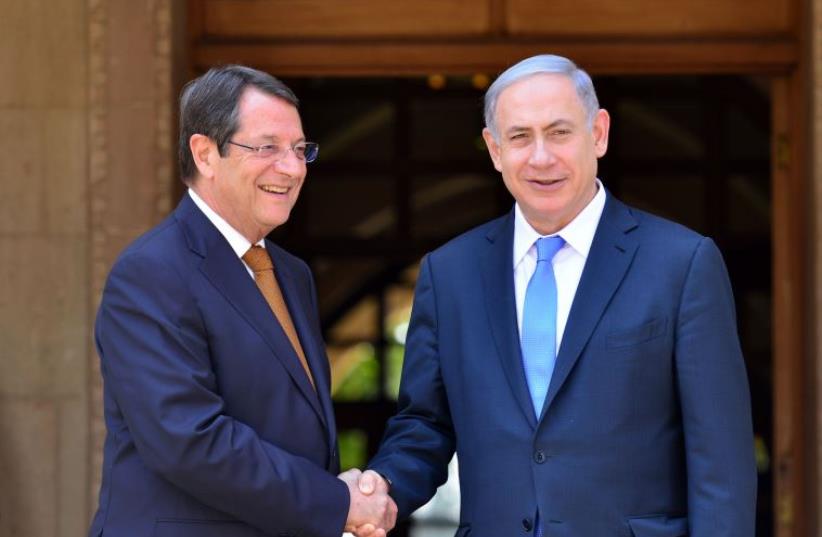 PM Netanyahu with Cypriot President Nikos Anastasiades
(photo credit: KOBI GIDEON/GPO)
Advertisement
NICOSIA - Israel and Cyprus agreed on Tuesday to expand their cooperation on energy issues, including the use of pipelines and electricity grids to link to European markets, as both countries develop natural gas fields off their coasts.Israeli Prime Minister Benjamin Netanyahu and Cypriot President Nicos Anastasiades said they would seek to tap the potential of natural gas in the sea bed beneath both countries."There is palpably renewed energy in our relationship, I mean that figuratively and literally," Netanyahu said. "... We think that by cooperating with each other we can take it out more easily, we can market it better, to the betterment of both our societies."Israel has reported some of the largest natural gas discoveries worldwide in the past decade. Cyprus found gas offshore in 2011.Netanahyu said the two countries were exploring various options on collaboration, but did not elaborate. Anastasiades said among the options were an east Mediterranean pipeline and the Eurasia interconnector, a private project to transport to Europe electricity powered by natural gas."With the Prime Minister, we agree exploration and exploitation of hydrocarbon assets is a sovereign right that is instrumental in the wider regional context and as part of a reciprocally beneficial relationship," Anastasiades said.Netanyahu said the two countries would also explore tightening security cooperation. Last month, a Lebanese man was jailed in Cyprus on charges of hauling ammonium nitrate on the island, which both countries blamed on a plot by the Islamist group Hezbollah."We want to achieve peace, peace depends on security and ultimately if you don't have the capacity to defend that peace it collapses very rapidly in our area," Netanyahu said.Although Cyprus is considered sympathetic towards Palestinians, its relations with Israel have grown in recent years. Anastasiades and Netanyahu enjoy particular rapport, with Anastasiades referring to the Israeli Prime Minister as his "dear friend Bibi" at least once.