“There is a great deal of importance to a resident ambassador, and especially with our neighbor to the south, considering its strategic importance,” Zionist Union MK Ksenia Svetlova said. 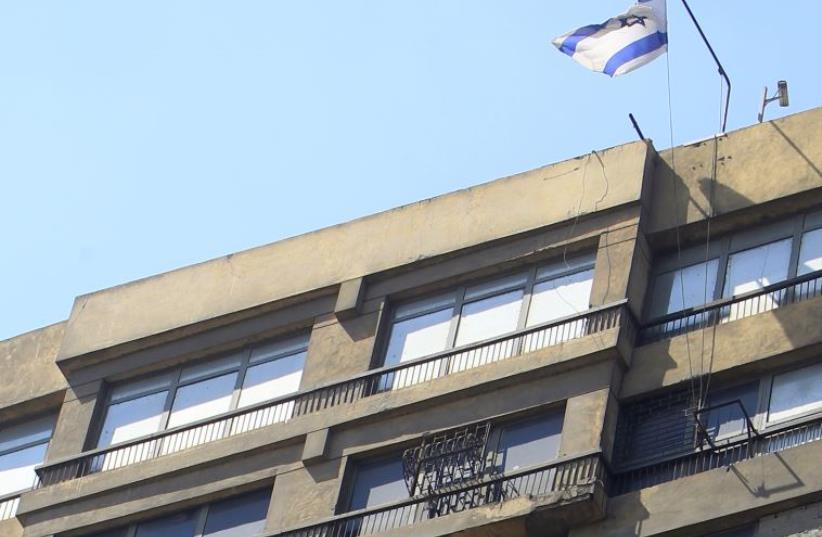 An Israeli flag flies at the top of the Israeli embassy in Cairo August 19, 2011
(photo credit: REUTERS)
Advertisement
Israel’s Ambassador to Egypt David Govrin returned to Cairo on Tuesday, some nine months after he and the entire embassy staff were pulled out of the country because of security concerns.The online newspaper Egypt Independent reported that Govrin flew into Cairo’s airport with a staff of eight diplomats, and was then escorted by a “large security motorcade” to Israel’s embassy.While the Foreign Ministry would not comment on the report, Zionist Union MK Ksenia Svetlova, a member of the Knesset’s Foreign Affairs and Defense Committee who has been urging the return of the diplomats to Cairo, welcomed the move. She said that Govrin has been fulfilling his ambassadorial duties from Israel for months.“There is a great deal of importance to a resident ambassador, and especially with our neighbor to the south, considering its strategic importance,” Svetlova said. “I initiated discussions in the Knesset about this matter, and followed with concern the weakening of our ties with Egypt in recent years.”Svetlova acknowledged that Israel’s security ties with Egyptian President Abdel Fattah al-Sisi are important, but said they are not enough, and that “there is also great importance to diplomatic ties between countries.”She noted that in November, Israel and Egypt will mark 40 years to former Egyptian president Anwar Sadat’s historic visit to Jerusalem, “and in this context, we need to exhaust ways to implement Sadat and [former prime minister Menachem] Begin’s vision to truly improve relations between the countries, and the way to do this does not only run through the Defense Ministry.”She expressed hope that the return of the ambassador will “open a window for the expansion of the relations between the two countries in other fields, such as commerce and academia, which in recent years have almost completely disappeared.”The reopening of the embassy follows weeks of high-level discussions between the two countries regarding the security arrangements needed at the embassy.Govrin was pulled out of Cairo with the entire embassy staff in December. The Shin Bet (Israel Security Agency) said at the time: “Due to security concerns, we have limited the return of the Foreign Ministry embassy team to Cairo.”Israel pulled the embassy staff a little more than a year after it reopened the embassy, four years to the day after a mob invaded and trashed it in 2011, forcing an emergency evacuation of the diplomats.