Prime Minister Benjamin Netanyahu called Damascus Gate both a symbol of terrorism and the fight against it. 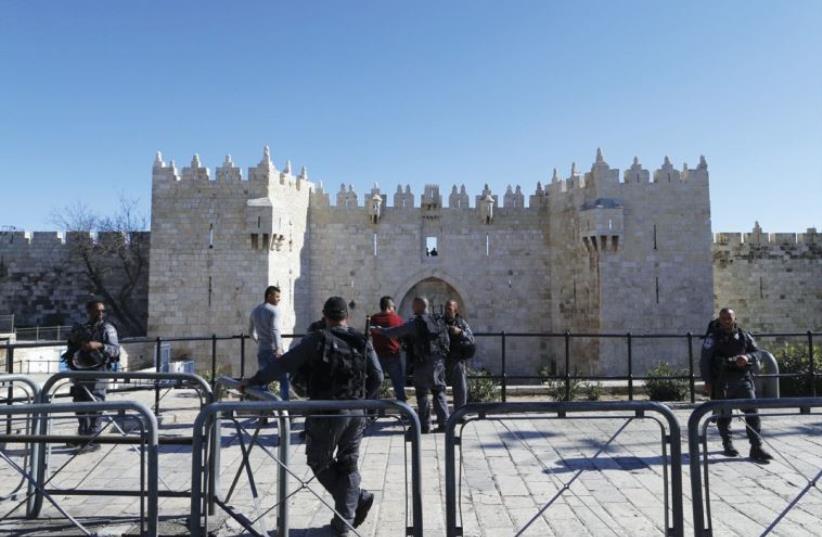 BORDER POLICE frisk a Arab man in front of Jerusalem’s Damascus Gate, the scene of much recent violence.
(photo credit: REUTERS)
Advertisement
The 300 housing units that the government pledged to build in Beit El five years ago will be marketed in September, Prime Minister Benjamin Netanyahu said on Thursday.Netanyahu’s pledge came in a meeting with Shai Alon, the head of the Beit El Municipal Council.Alon has been parked outside Netanyahu’s office since the beginning of the week, in protest against the government’s failure to meet the pledge the prime minister made in 2012 to build the homes in the settlement in exchange for the peaceful evacuation of the Ulpana outpost on the edge of Beit El. That outpost was evacuated after the courts held that it was built on private Palestinian land.Netanyahu said that this was an “old commitment” that will now be fulfilled.Earlier in the day former Likud minister Gideon Sa’ar – a Netanyahu political rival – visited the protest tent and said he wanted to express support for Beit El’s demand that the commitment be fulfilled.In a separate event, the prime minister also said on Thursday that new security measures will be put into place in the near future at the Damascus Gate, which has been hit often by terrorist attacks, including the one last Friday that killed border policewoman Hadas Malka.Netanyahu, at a cornerstone laying ceremony in Bat Yam for a water park to be named after his brother, Lt.-Col. Yonatan Netanyahu, who was killed in the 1976 Entebbe rescue raid, said that “time after time, murderers have congregated around that gate and attacked there.”The Damascus Gate, he said, “has turned into a symbol of terrorism, but also a symbol of anti-terrorism, of the fight against terrorism.”The premier said that he called for a new plan to secure the area to be drawn up and presented that will “limit the freedom of action of potential attackers.” The plan, he said, will be implemented “very soon.”