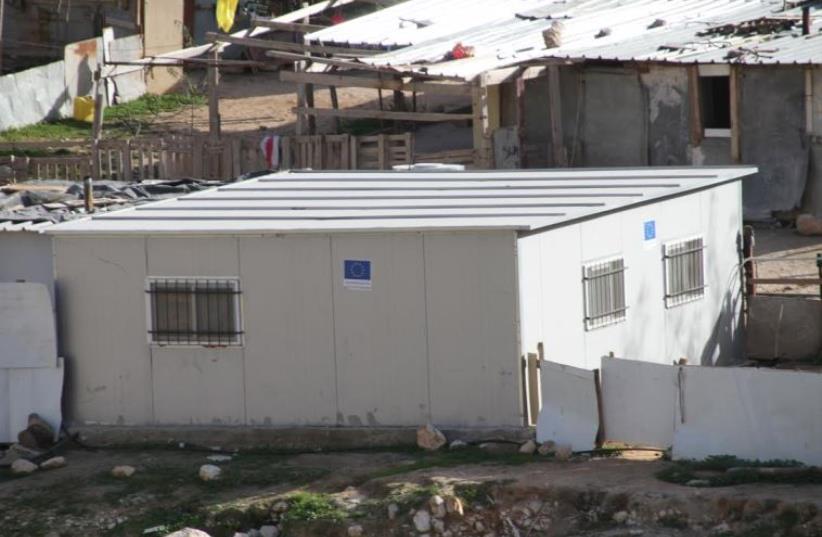 EU funded structure in a Palestinian Beduin encampment outside of the Ma'aleh Adumim settlement in the West Bank.
(photo credit: TOVAH LAZAROFF)
Advertisement
The Foreign Ministry has warned European governments against flouting Israeli law by funding illegal Palestinian building in Area C of the West Bank and has already razed such structures.“We bring this issue up in almost every conversation we have with the Europeans,” said Aviv Shir-On, Deputy Director General for European Affairs in the Foreign Ministry.He spoke on the issue before a Knesset Foreign Affairs and Defense Committee sub-group on Judea and Samaria on Tuesday.“We won’t accept illegal building,” Shir-On said. The Europeans have been informed about Israel’s stance on this issue, he added.“We’ve told them they have to take into account, that such construction can be destroyed,” Shir-On said.But he has assured the European officials, Shir-On said, that they will be notified before any demolition occurs.Starting in September the EU, the Foreign Ministry and the IDF will meet regularly to tackle the issue, Shir-On added. He explained that both individual European governments and the EU were funding illegal Palestinian projects.The European Union responded to matter in writing on Wednesday through its Embassy in Tel Aviv. It hinted that Israel violated international law, by failing to allow Palestinians adequate recourse to legal housing in Area C of the West Bank. It’s activity, the EU said, fits the definition of humanitarian assistance which it planned to continue to provide.“All EU activity in the West Bank is fully in line with international humanitarian law,” it wrote.“While Israel has overall security and administrative responsibility in Area C, under international law Israel also has the obligation to protect and facilitate development for the local population, and to grant unimpeded access for humanitarian assistance,” it said.“The EU Is providing humanitarian aid to allow the residents to meet their most basic needs of shelter and sanitation,” it said.The EU called on Israel to approve master plans for Palestinian development in Area C of the West Bank that have been submitted by Palestinian communities in that area, it said.“To date only a handful of the proposed plans have been approved. At their last meeting in July the EU foreign ministers unanimously voiced their strong opposition to Israeli demolitions and confiscations, including of EU-funded projects, and called for a fundamental change of Israeli policy to enable accelerated Palestinian construction, as well as social and economic development in Area C,” the EU said.The issue of EU funded illegal Palestinian building, was first raised in the last few years by the non-governmental group Regavim, which monitors such activity and gave a power point presentation at Tuesday’s meeting. It has estimated that there are close to 1,000 such EU funded structures in the West Bank, which are mostly modular construction with cement floors. The EU’s involvement in illegal Palestinian building is obvious to the naked eye, because it often places a large round blue EU logo on the projects its sponsors.Regavim’s concern was picked up by right wing politicians, including the head of the FADC subgroup on Judea and Samaria, MK Motti Yogev (Bayit Yehudi). They are particularly concerned that the IDF has refrained from demolishing such structures out of fear of angering the international community.“This isn’t spontaneous construction that address a local need. It’s an integral part of the Palestinian strategy to establish facts on the ground to stop the expansion of Jewish settlements such as Maale Adumim,” Yogev said.The Coordinator of Government Activities in the Territories Maj.-Gen. Yoav Mordechai told the sub-group, he was not sure, if an overall strategy existed when it came to illegal Palestinian construction in Area C.Both men spoke of an area of the West Bank that is under Israeli military and civil control, but which the Palestinians believe will one day be part of their future state.As a result, all Israeli and Palestinians construction there has geo-political significance.“There is a war over Area C,” Mordecai said.He acknowledged that the international community’s involvement economic and humanitarian involvement in the area was very helpful and that includes the Europeans. What concerned him was the international involvement, particularly in authorized construction and infrastructure projects that are not coordinated with the IDF, Modechai said. The European are one of the central supporters of such projects, he said.Since April he has held 30 meetings with international officials on this issue, including with the EU's Ambassador to Israel. From January 2014 the Civil Administration has identified 140 such projects and demolished 40 illegal structures funded by the international community, he said.He clarified however, that much of the Palestinian construction is not funded by the international community. Since January 2014, he said, the Civil Administration has uncovered, 1,619 instances of illegal Palestinian construction, the bulk of which, 1,140 structures, was on private Palestinian property.The IDF’s prefers to resolve the issue of illegal construction though joint dialogue with the Palestinians, to find an alternative to forced demolitions.This is particularly true with the Palestinian Beduins in the area of the Ma’aleh Adumim settlement and in the Palestinian village of Sussiya in the South Hebron Hills. MK Bezalel Smotrich (Bayit Yehudi) told Mordechai he had to more than just talk.“So what are you going to do about it, just wag your finger? My fear is that such conversations will led to the authorizations of such projects.”Mordechai assured him the IDF took the matter seriously.In the last year-and-half, the IDF has moved immediately against illegal Palestinian building with demolitions orders, Mordechai said. These are handed to European governments as well, if they are involved in the projects, he said.The highest priority areas for cracking down on illegal Palestinian construction is in the E1 area of Ma’aleh Adumim and in the IDF’s firing ranges, he said.The Civil Administration is advancing a master plan to provide housing for the Palestinian Beduin near the city of Jericho, he said.