Prime Minister Benjamin Netanyahu spoke after the attack with both Jordan’s King Hussein and Palestinian Authority President Mahmoud Abbas in an effort to keep the situation from spiraling. 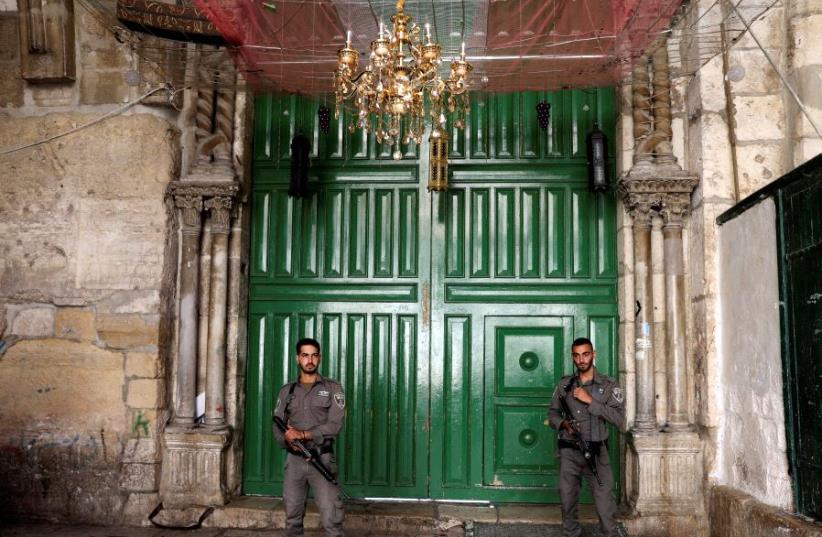 Israeli border policemen secure the entrance to the compound known to Jews as Temple Mount, in Jerusalem's Old City July 14, 2017.
(photo credit: REUTERS/AMMAR AWAD)
Advertisement
Amid unconfirmed reports that Saudi Arabia and Israel have exchanged messages over tension on the Temple Mount following Friday’s attack there, government sources said Wednesday that Israel’s main interlocutors in trying to calm the situation are the Jordanians and the Palestinian Authority.Prime Minister Benjamin Netanyahu spoke soon after the attack with both Jordan’s King Hussein and Palestinian Authority President Mahmoud Abbas in an effort to keep the situation from spiraling out of control.Government sources said there has been constant contact between Israel and Jordan since, primarily being run out of the Prime Minister’s Office.Jordan is the natural address, one source said, both because it can influence the Palestinians and also because of the Hashemite Kingdom’s status as custodian of al-Aksa Mosque, which it administers through the Wakf.Turkey is also interested in gaining influence and a foothold on the Temple Mount, but Jerusalem has no interest whatsoever in using Ankara’s services. In March, Turkish President Recep Tayyip Erdogan, who characterized Israel as “racist,” called on Muslims to go en masse to the Temple Mound to identify with the Palestinians.The source said that Egypt is also not very involved in the issue because, unlike Jordan, it has no formal status regarding the Temple Mount.And the US has also not publicly played a role in managing the crisis.In the meantime, in a campaign aimed at the Arab world, the Prime Minister's Office released an infographic of security checks at holy sites around the world, including body checks being conducted at al-Sadeq Mosque in Kuwait, a picture of the police control room monitoring the Ka’bah in Mecca, metal detectors at the entrance to the Western Wall, and a hand-held metal detector being used at the entrance of the Vatican. “The metal detectors and security measures at the Temple Mount prevent terror and protect worshipers – like at religious sites everywhere,” the infographic reads.