The 12,000-ton-capacity processing and storage facility, operated by Haifa Chemicals in the city's industrial zone, has been the subject of ongoing disputes and legal battles for years. 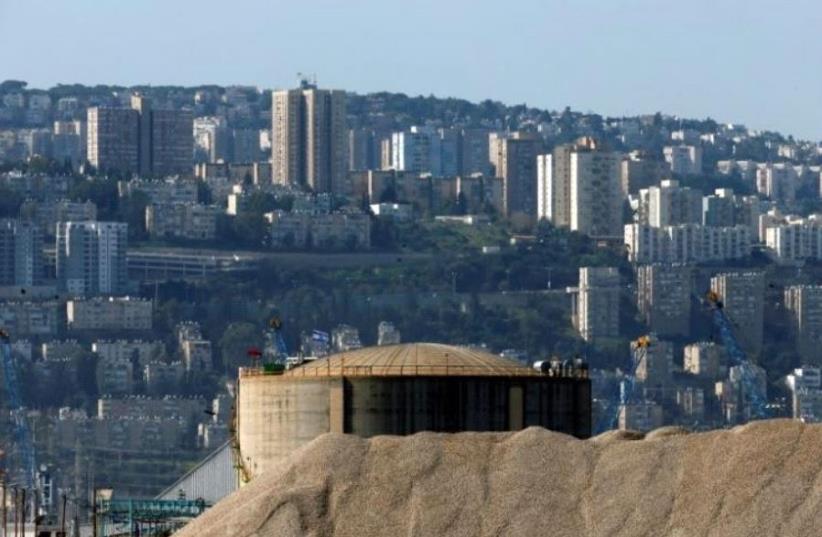 Haifa Chemicals' ammonia tank, Israel's largest ammonia tank, is seen in the Haifa bay area
(photo credit: REUTERS/BAZ RATNER)
Advertisement
Quashing a long recognized threat to Israel's North, the High Court of Justice ruled on Sunday that Haifa's disputed ammonia tank must be "completely emptied" by July 31. The 12,000-ton-capacity processing and storage facility, operated by Haifa Chemicals in the city's industrial zone, has been the subject of ongoing disputes and legal battles for years. Environmentalists and politicians have long dubbed the tank, which stores all the ammonia imported by Israel, a “ticking time bomb” and a threat to the Haifa region.The tank began garnering international attention a year ago when Hezbollah chief Hassan Nasrallah threatened to attack it in February 2016. Although ammonia is widely used in industrial refrigeration and fertilizer production, it is also a highly toxic gas once exposed to open air. "Ammonia is a poisonous substance, and in light of the proximity of the terminal to half a million people in the Haifa area, there is a risk that a security breach or a safety malfunction might cause disaster, alongside the risk of a possible leakage from or damage to the ammonia ship, which is supposed to visit the Haifa Port every month," Sunday's ruling said. While a Haifa District Court justice had previously ordered that the tank be closed down by April 1, the High Court granted Haifa Chemicals an extension until the end of July. The court also approved "a one-time shipment from ammonia vessels" to refill the tank one last time and satisfy the country's immediate needs for the chemical, particularly in the fertilizer industry. In 2013, the government decided that the contentious tank must eventually be shut down and transferred to a far less-populated location, Mishor Rotem in the Negev. Yet in November, the Environmental Protection Ministry that the tendering process for that step had failed.On Sunday morning, prior to the High Court decision, Finance Ministry director-general Shai Babad held a discussion with relevant government officials to examine the options going forward. At the conclusion of the meeting, the officials agreed that the best possible alternative would involve employing a small ammonia vessel off the coast of Haifa, while constructing the new facility in the South. "In addition to the fact that this alternative requires no funding from the state budget, it would contribute to creating competition between ammonia suppliers in the economy, as opposed to the prevailing situation today, while reducing ammonia transport on the country's roads and encouraging economic development in the south of the country," a statement from the Finance Ministry said. Although green groups hailed the High Court's decision on Sunday, they criticized the Finance Ministry's proposal for the future. "The alternative that the Finance Ministry has proposed means leaving the ammonia tank intact and abandoning Haifa residents to danger for another three years at least," said a statement from the environmental organization Zalul. MK Yael Cohen Paran (Zionist Union) likewise slammed government officials for proposing this idea, stressing that "it is inconceivable that the State of Israel would continue to endanger" Haifa Bay residents. Applauding the High Court ruling, however, she expressed her hopes that the tank would be emptied swiftly."It is time to end this ongoing saga," she added.