Experts at JPost Conference spoke about the geopolitical implications of the discovery. 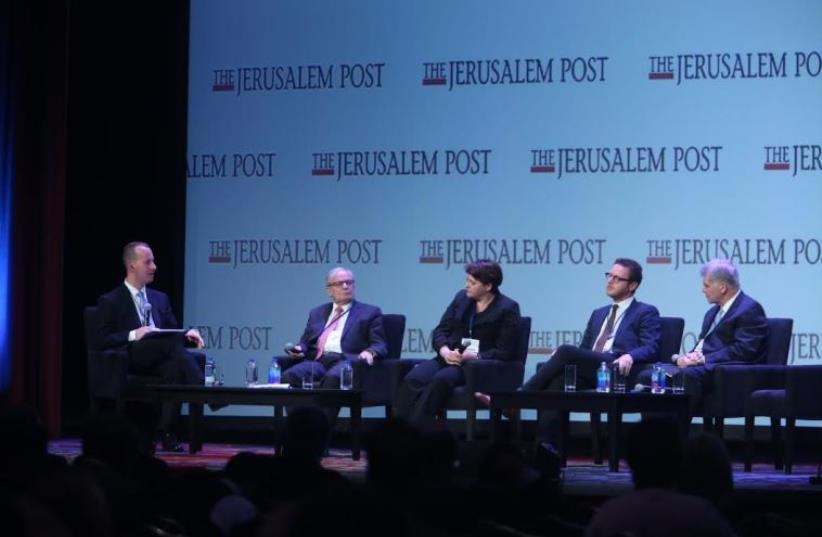 Jerusalem Post Conference panel on the Israeli economy.
(photo credit: MARC ISRAEL SELLEM)
Advertisement
Israel’s natural gas discoveries could be key in transforming diplomatic relations in the region while boosting its growing economy, a number of experts said on Monday at the Jerusalem Post Annual Conference in New York.At the conference’s panel on the Israeli economy, International economic law scholar and practitioner Efraim Chalamish said Israel’s energy sector has the potential to really advance the “start-up nation” since it allows for large companies to be part of the economy, employing large workforces made up of people diverse backgrounds and skill levels.Chalamish said that “most importantly,” he thinks energy is a critical part of the nation’s geostrategy. “It’s not only about making money and creating jobs,” he said. “It’s about improving the geostrategic status of the State of Israel.”“In the past couple of years, Israel was very smart to leverage the natural gas discoveries for military, for diplomatic purposes,” he said, speaking of the several memorandums of understanding to supply gas to some of Israel’s neighboring countries.Noble Energy, he said, was a good example of a foreign company being patient during the “regulatory and economic challenges” in the energy industry. However, he warned that public companies do not have the ability to wait through years of bureaucracy.Keith Elliott, senior vice president of Noble Energy Inc.’s eastern Mediterranean operations pointed to his company being in the process of “consummating a contract” to provide Jordan with natural gas from Leviathan.“That’s one example of a situation where Israel has the opportunity to take advantage of the gas not only for its own internal benefits but for a broader geopolitical benefit,” he said.In the three years since natural gas began flowing from Tamar reservoir (of which Noble Energy owns 36%), Elliot said it has been able to provide for 50 percent of Israel’s energy needs, allowed for cleaner air thanks to a reduced need for coal power and has brought Israeli government over NIS 5 billion, “to fund programs it deems essential.”Israel stands poised “to greatly magnify” those benefits, Elliot said. The consortium developing the Leviathan reservoir are aiming to have gas begin flowing to customers by 2019.Asked about any reverberations from the boycott, divestment and sanction movement, Nili Shalev, who is the Israeli economic minister to North America, said that the relationship between Israeli and American businesses is strong, as evidenced by the hundreds of Israeli-American business collaborations each year. “I don’t see any influence of BDS on this relationship,” she said.Izzy Tapoohi, president and chair of Israel Bonds in the US, agreed and recommended that people who want to take a stand against BDS buy a 10-year Israel Bond. “Do you really see a university tearing up a $1m. Israel bond investment?” he said. “You’ll help Israel and teach a good lesson to the BDS guys.”Tapoohi added that the Israeli economy has grown 180 percent in the past 20 years.“If you go and stand on a tall building in Tel Aviv, you will see more [construction] cranes than anywhere else in the world,” he said.