Curator of Ancient Egypt at the Israel Museum identifies seal as a scarab amulet from the New Kingdom, the period stretching from the 16th-11th centuries BCE. 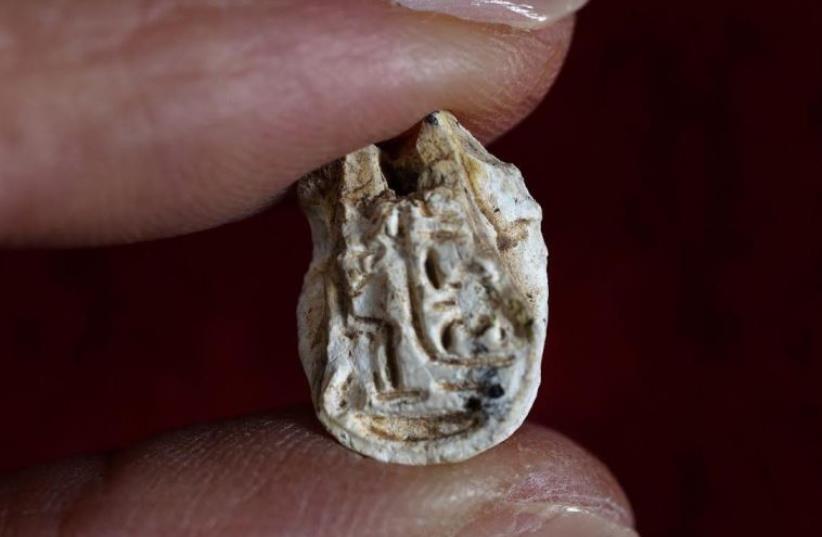 3,500-year-old seal found by hiker at the Horns of Hattin in the Lower Galilee
(photo credit: COURTESY OF ISRAEL ANTIQUITIES AUTHORITY)
Advertisement
A man out for an excursion with his family discovered a 3,500-year-old seal while hiking at the Horns of Hattin in the Lower Galilee, the Antiquities Authority announced on Tuesday.While walking with his children, the farmer from Kfar Hittim spotted the engraved, beetle shaped object and called the Antiquities Authority in order to learn what was written upon it.Dr. Dafna Ben-Tor, curator of Ancient Egypt at the Israel Museum, identified the seal as a scarab amulet from the New Kingdom, the period stretching from the 16th-11th centuries BCE.According to Ben-Tor, the amulet shows “shows King Pharaoh Thutmose III seated on the throne” alongside the monarch’s name, she said.It was Thutmose, who ruled Egypt from 1379-1425 BCE, expanded his empire to encompass the land of Canaan, defeating a Canaanite army in Megiddo which is memorialized in huge bas-reliefs on the walls of Karnak temple in Egypt.The scarab in the shape of a dung beetle would have had cosmological significance in ancient Egypt and many are discovered during the course of archaeological digs. The mountains comprising the Horns of Hattin are well known for being the site of the 1187 battle in which Salah-a-Din defeated the armies of Christian Franks, bringing an end to the first Crusader kingdom.“It is extremely important” for those finding such antiquities to give them to the antiquities authority, said the body’s director of national treasures Dr. Miki Saban, as they “enrich the archaeological knowledge about the country” and should be available to be seen by all.