"The citizens must understand that change must come from the bottom. We have the power to do great things to change the political map in Israel.” 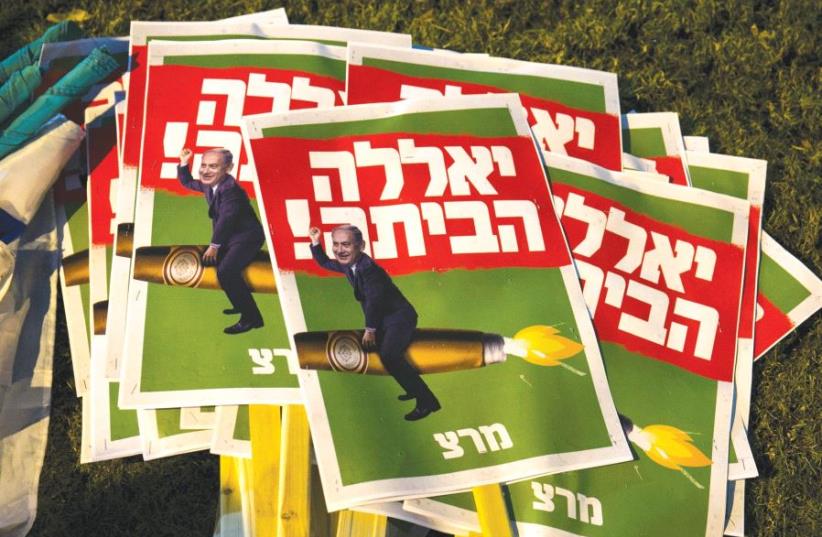 SIGNS READING ‘Go Home’ are seen before a left-wing protest calling for the resignation of Prime Minister Benjamin Netanyahu in Tel Aviv
(photo credit: REUTERS)
Advertisement
A new grassroots left-wing movement will be launched on Friday that will attempt to push the public to topple Prime Minister Benjamin Netanyahu and elect a new government that will replace the Right in power.The movement is called Mehazkim, which means strengthening. Until now, it has existed on social media and has attracted some 70,000 followers, but its organizers say it reaches 1.7 million people a month.Former prime minister Ehud Barak and former Meretz Party leader Zehava Gal-On will attend the launching event in Tel Aviv on Friday afternoon. Organizers stress that it will not become a political party nor identify with one.The movement’s founder, Ori Kol, was a literature and political science student who lived with his parents when he founded it. He took advantage of social media to build a large following, for instance, by spreading a video of Netanyahu urging then-prime minister Ehud Olmert to quit in 2008 due to corruption charges similar to those Netanyahu is accused of now.“Two years ago, we founded Mehazkim with no money, support or name recognition,” Kol said. “Now we draft thousands of shekels from the members of our community to fight for the values of the Left. The citizens must understand that change must come from the bottom. We have the power to do great things to change the political map in Israel.”Those values include the pursuit of peace, justice and equality, building up the country socioeconomically, and decreasing socioeconomic gaps.Mehazkim will take advantage of the same loophole of the similar organization, Darkenu, which as V15 in the 2015 election was legally able to raise and spend huge sums, because they were not affiliated with a party. Mehazkim’s organizers vow to be bigger than Darkenu, which has the same goal of replacing the Right.The latest scandal highlighted by Mehavkim involved talk show host Eyal Berkovich, who called Arab MKs “haters of Israel” and “terrorists sitting in Knesset.”