According to Chinese reports, the visiting Israeli medical clowns bring the "power of humor," which has been shown to boost endorphins and speed up patient's recovery. 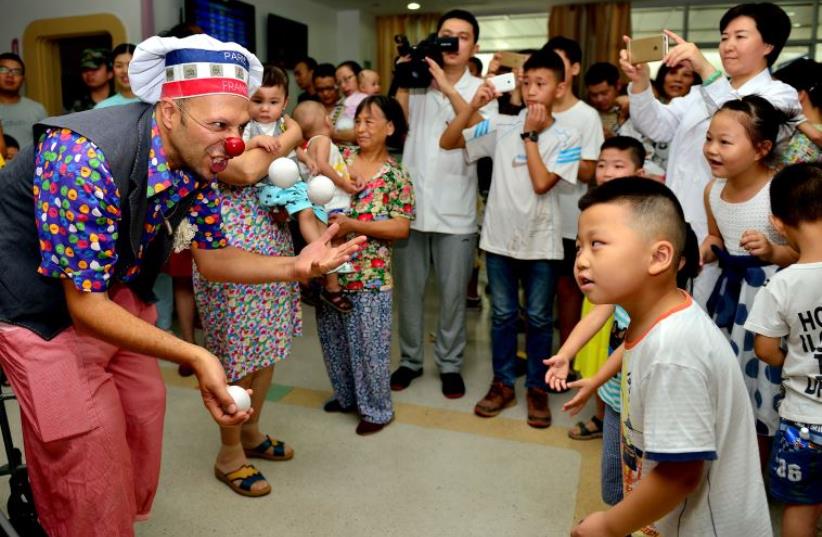 Israeli medical clowns in China
(photo credit: FOREIGN MINISTRY)
Advertisement
Numerous Chinese papers last week featured stories about two Israeli medical clowns entertaining young patients in hospitals in southwestern China.The medical clowns, Avital Dvory and Shlomi Golan, were brought to China by the Israeli consulate in Chengdu and performed for children patients, gave lectures and conducted workshops at seven hospitals and two orphanages in the region.According to the Foreign Ministry, the visits were widely covered in the local press because the concept of “medical clowns” is new to China.CQNEWS, the main news portal in Chongqing, a city of some 30 million people, wrote that the “medical clowns” in colored costumes “came to one of the children’s wards of a local hospital “and made the children in the wards forget the pain.”
(Courtesy: Foreign Ministry)Writing that the two clowns were from Israel, the report continued: “According to experimental results, the ‘power of humor’ can indeed bring certain medical effects.It can push the brain to produce more endorphin, thus alleviating the pain, and generate more white blood cells, thus improving immunity.Generally speaking, it can help in accelerating the recovery of patients.”An English website in Chengdu, Go Chengdu, quoted an official from the municipality as saying he hopes Chengdu and Israel will strengthen medical cooperation in the future.“The clown care has a long tradition at medical institutions in Israel, especially children’s hospitals,” the report wrote.As a result of the interest in this field triggered by the visit, the consulate is planning to hold follow-up training seminars in 2016.Israel opened its consulate in Chengdu in November 2014, its fourth consulate in China, and the one responsible for southwestern China, a region currently enjoying the highest rate of economic growth in the country. Chengdu, with a population of more than 14 million people, is the capital of the Sichuan province.In addition to the consulate in Chengdu, and the embassy in Beijing, Israel also has consulates in Shanghai, Guangzhou and Hong Kong.