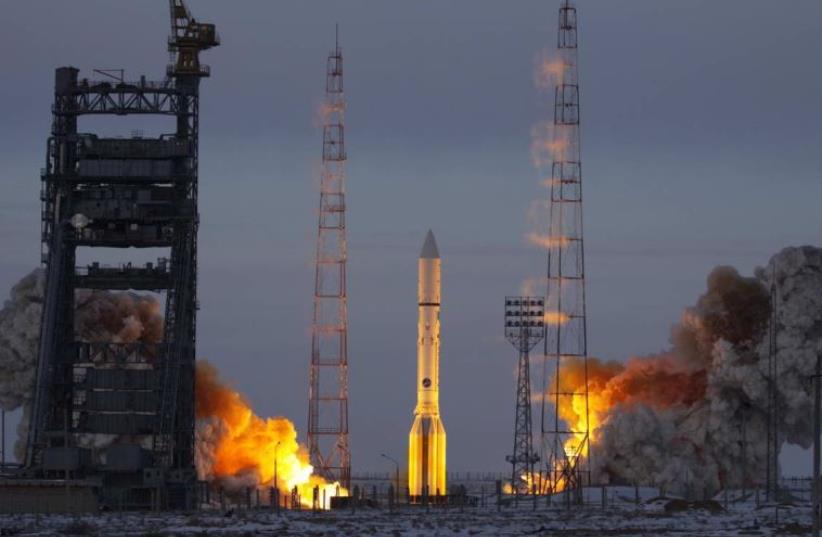 Amos 5 satellite launch.
(photo credit: SPACECOM)
Advertisement
Inadequate investment and research in Israel’s civilian space program will have a harmful knock-on impact on military space industries, experts warned during a conference in Herzliya on Tuesday.Speaking at the 11th Ilan Ramon International Space Conference, held by the Fisher Institute for Air and Space Strategic Studies, Brig.- Gen. (res.) Abraham Assael, CEO of the institute, also described how the lifting of sanctions on Iran will speed up Tehran’s space program and missile development.“After over a decade in which the Fisher Institute watched and examined the Israeli space industry, we can today say that without an innovative and dynamic civilian space industry, and without significant investment in research and development on the national and academic, as well as industrial levels, there is no future for sustainable space industry in the State of Israel,” said Assael, a former air force base and squadron commander.Driven by need, Israel has in the past led space technology advances, particularly in the areas of small satellites and their launchers, he noted.“Today, we are moving forward in very measured steps while other space industries, like the Iranian space industry, are developing at a spedup rate,” Assael said.“The lifting of sanctions following the Iran nuclear agreement will cause its space program development to speed up. This will act as a legitimate engine driving Iranian technology in a range of fields and serving as a fertile ground for the development of matching military capabilities like the research and development of long-range missiles,” he cautioned.Ofer Doron, head of Israel Aerospace Industries’ MBT Space Division, issued his own stark warning, saying Israel’s civilian satellite program is shrouded in uncertainty.“Israel has no space policy, and we are moving backwards,” Doron told the conference.He warned of inadequate educational and academic research to support Israel’s space agency, which could harm future technology and satellite development.“In most of these areas, there is no significant activity occurring in the State of Israel, and I can only be jealous of foreign space agencies around the world. A multi-year budget is required with a significant scope.We need mechanisms that allow us to take advantage of the budget,” Doron said.“Even the low budget of the Israel Space Agency cannot be implemented. We need to leverage the great achievements of military space programs toward civilian applications so that budgets can have double uses. Without civilian licenses, which are the norm in the world, this simply will not work.”The Israel Space Agency’s current annual budget stands at $15 million, matching the size of the Mexican, Swiss and South African programs.“If we make it five times bigger, we will be like Pakistan. We are behind Iran, Spain and Argentina and significantly behind European space agencies,” Doron said.