Israeli students learn English to The Sound of Music

The unique project began out of a requirement to drastically improve the level of English in the school. 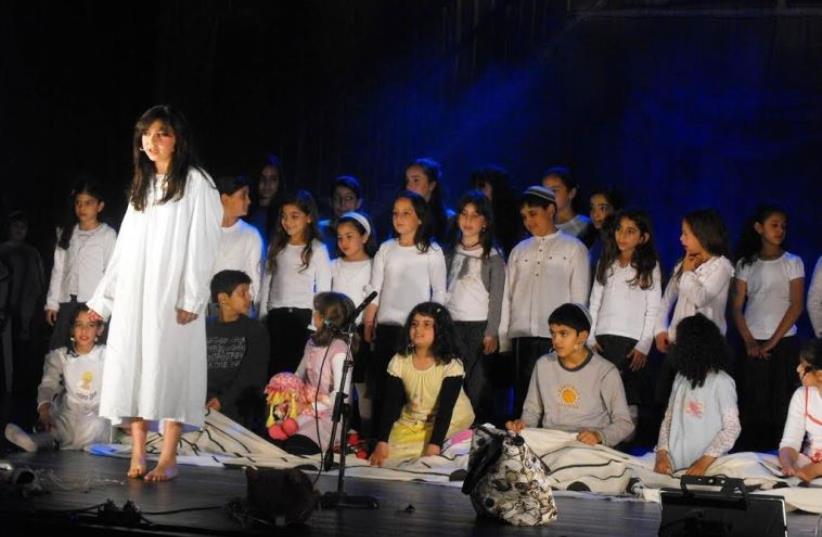 Israeli students learn English to The Sound of Music
(photo credit: Courtesy)
Advertisement
Putting on a production of The Lion King is no easy undertaking, especially when the actors are Israeli pupils and the entire show is put on in English.But one teacher, Anat Ptachya, has developed an innovative initiative to teach her pupils English, transforming the atmosphere at the Schechterman Religious Elementary school in Kfar Yavetz – even raising the school average on standardized English testing by 35 points.“It began with a need, the achievements [in English] were very low, I don’t even want to say how low, and the children really wanted to improve, only they did not receive an adequate response,” Ptachya recently told The Jerusalem Post.Ptachya came up with the idea because she was very fond of musicals and thought it could be a fun and interactive way to encourage pupils to learn English.“There were very strong students and very weak students, so we needed something that all the students could enjoy, something that is part of the day-to- day and not part of studying in a class,” she explained.The entire project takes place in English and includes watching the cinematic version of the musical, receiving texts and auditioning for parts.The songs from the musical are embedded into the English studies curriculum and the children receive special tutoring that focuses on acting and dancing skills and diction.“Even the weaker students who wanted to be part of the project learned English and learned texts – it is amazing to see how dedicated they can be,” she said.The production process, spanning eight months, involves the entire school system – the arts and music teachers, librarian, groundskeeper and the pupils’ parents who accompany and assist the process.“The special part of this project is that everyone has found a place to incorporate their talents from non-readers to stronger students,” she said. “For some pupils, they have found a love for acting and some for art, and some want to be production assistants – everyone has found their place.”What began as a small production featuring some 50 children in the Sound of Music has grown to include a production with the participation of some 150 children in grades one through six.“Because there are so many children, I had to start making up parts that may not be in the original play to include all the children,” Ptachya said.“This is not an easy task to organize 150 children and you have to deal with parents who want their kids to be the star – and it is all done in addition to our normal jobs,” she said. “But, on a personal level, I am so connected to this and I enjoy it so I don’t see the difficulty.”To date, the school has produced The Sound of Music, My Fair Lady, Mary Poppins and The Lion King.When fully produced, the musical is included in the regional council’s cultural education package and is performed before pupils from other schools in the region.“This is not regular learning.As the Education Ministry says, this is ‘meaningful learning,’” Ptachya said.In 2014, Ptachya’s initiative was awarded the Recanati-Kop-Chais-Rashi Award for the Entrepreneur Teacher.Prof. Yaakov Kop, one of the founders of the prize said of Ptachya: “Teachers’ initiatives that really transform a subject and transcend beyond the classroom and impact the entire school and community is the precise reason we founded the award.”The prize is meant to encourage and highlight entrepreneurial working patterns in the education and social-service systems and draw public attention to those who adopt these initiatives.But for Ptachya, the initiative is just part of her usual teaching methods.“I didn’t think this was something extraordinary.It just felt natural to me. It seemed so routine, but afterwards when I see the stage all lit up and the kids acting it really is something else,” she said.