The assailants reportedly beat the soldiers with a hookah pipe and other blunt objects. 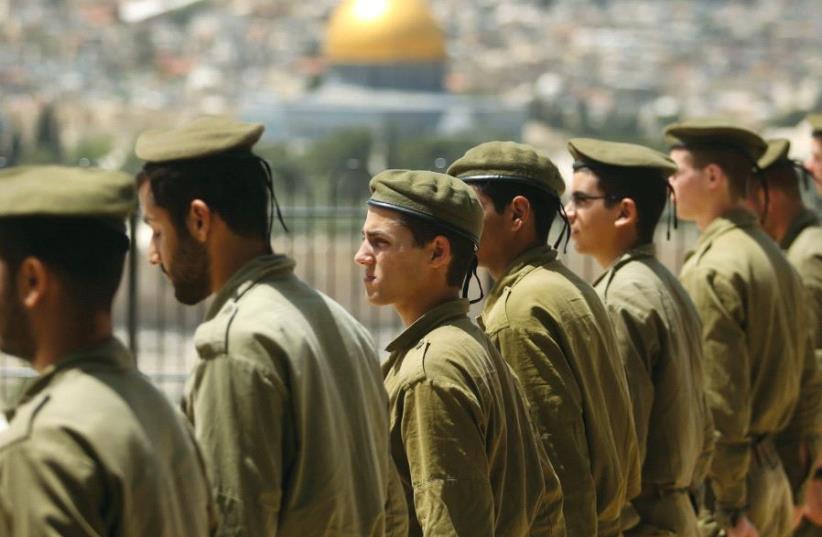 IDF soldiers
(photo credit: MARC ISRAEL SELLEM)
Advertisement
Police caught and arrested an Israeli teenager suspected of taking part in an assault against two off-duty soldiers and a teenage civilian Friday night in a public park in Pardes Hanna — reportedly because they mistook them for being Arab.According to police, a 16-year-old resident of Pardes Hanna took part in an assault by a group of youths against the two soldiers, who are from the Golani and Kfir Brigades and live in the nearby town of Rosh Ha’ayin. The soldiers were sitting in a park with a young woman and a 17-year-old male.The assailants reportedly beat the soldiers with a hookah pipe and other blunt objects. The victims were treated at Hadera’s Hillel Yaffe Medical Center for injuries, including to their face, before being released.According to Israel Radio, the soldiers were too scared to call the police following the incident, and it was only after the father of one of the soldiers learned his son was in the hospital that the police got involved and opened an investigation.Police spokeswoman Luba Samri told The Jerusalem Post on Sunday that, based on the victims’ statements, they believe the attackers are Jewish. But the motive for the assault is still under investigation as well.The soldiers were in civilian clothes during the assault, she added.“Soldiers go on vacation and are attacked by criminals just because they look like Arabs. It’s a disgrace,” Ynet news quoted the father as saying. “They [almost] lynched them, it could have ended in death. How did we stoop so low? And even if they were Arabs, [does this mean] we should harm them? We are shocked and demand that the lawbreakers be brought to justice.”Police are expected to ask to extend the suspect’s detention at the Hadera police station.