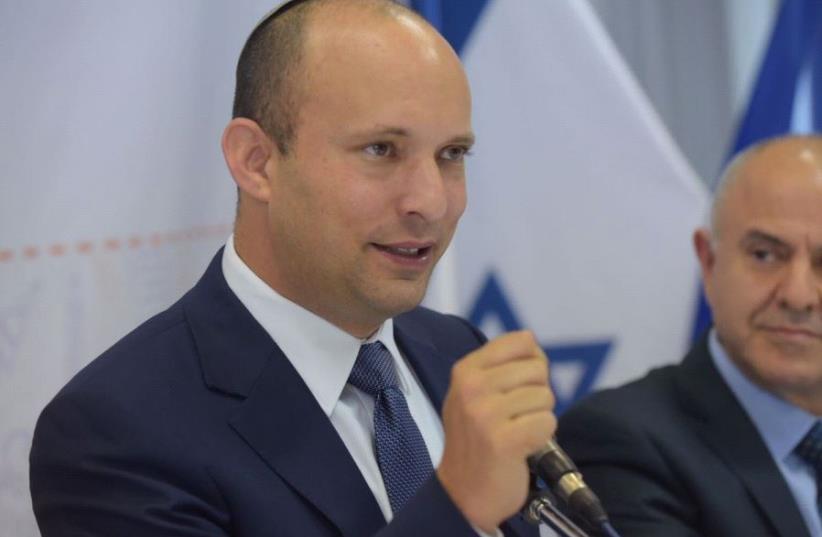 Naftali Bennett
(photo credit: AVSHALOM SASSONI/MAARIV)
Advertisement
While the future of the suggested "ethics code" is unclear and it awaits the approval of the Council for Higher Education, politicians from both Left and Right are advancing legislation for and against the spirit of the document, which wishes to prevent university professors from expressing their political views in class.On Sunday, the Ministerial Committee for Legislation will discuss whether to support a bill that holds that university campuses should be safe spaces for performing political activities and expressing political opinions.The bill, submitted by MK Dov Henin of the Joint List, is an amendment to the Student’s Right Law from 2007, and aims to “make clear that the freedom of speech and the freedom of assembly will be possible in all academic institutions,” according to Henin.He stated that this bill comes as a counter-initiative to the suggested “ethics code” that was proposed by Education Minister Naftali Bennett, and other similar actions. “We are offering to anchor in the law, in a very clear way, the right to hold political activities at universities,” he said. “The need to protect the freedom of speech at universities is getting more and more acute, in light of reality.”According to the proposed code, drafted by Prof. Asa Kasher (who also drafted the IDF Code of Conduct), units would be established on campuses to enforce the ban, and students could complain to them about violations.It would also bar professors from calling for boycotts of Israeli academic institutions.Meanwhile, MK Oder Forer of Yisrael Beitenu submitted earlier this week a bill that intends to “prevent lecturers from making rebellious remarks.”This comes in light of the recently released video by right-wing NGO Im Tirzu of Dr. Ofer Cassif from the Hebrew University in Jerusalem, in which he allegedly compared the legal situation in Israel to Nazi Germany. Forer’s bill wishes to grant the education minister, as the head of the Council for Higher Education, the authority to revoke payments from universities if one of their lecturers have committed such felony.  More specifically, the explanatory notes of the bill define ‘rebellious remarks’: “When is it proven without a doubt that he [the lecturer] expressed hatred, contempt or disloyalty to the state or to government authorities or to the law; [if the lecturer] incited or tried to persuade [the students] to change the law in an unlawful manner; [if he] sparked hatred [in order to create division] among different groups of the [Israeli] population.”The Committee of University Heads in Israel slammed this initiative and called it an “outrageous act.” “This bill has no room in a democratic country,” they said in a statement. “The universities in Israel are among the most important bodies in the country; they strengthen it and help build its future. It is unfortunate that there are politicians that are willing to make the universities a punching bag only to get a headline in the newspaper.” They repeated in the statement their call to stop these kinds of activities, which they see as harmful for the freedom of speech. “As we warned before, we are on the verge of a slippery slope,” they said.